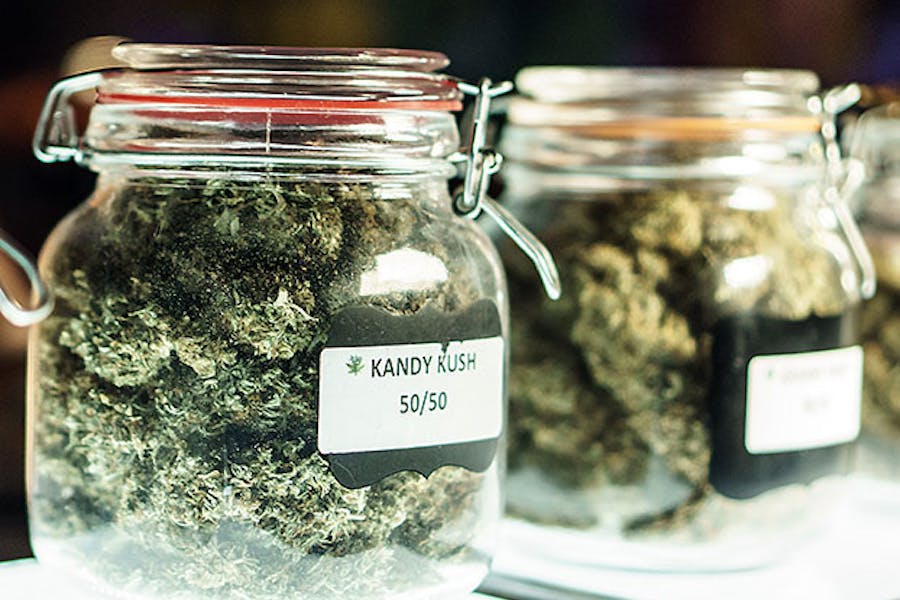 Cannabis strains, and how to choose between them, can be likened to the different kinds of apples (Granny Smith, Ambrosia, Gala, Pink Lady, etc) — same plant but different varieties. But unlike most fruits and vegetables, marijuana can affect your mind, and different varieties often produce different types of intoxication, or “highs.” And as science has shown in recent years, they also have distinct therapeutic properties.

This short guide was compiled by analyzing and interpreting the scientific literature available — though largely preclinical — with the goal of helping you narrow down the options and find the right strain for you.

Jump straight to the step-by-step guide ↓

What are weed strains (and chemovars)?

In years gone by there were only a few cannabis varieties around the world, often referred to as “landrace” strains. Much like the grapes of Cabernet Franc and Sauvignon Blanc were crossbred to produce the famous Cabernet Sauvignon, cannabis varieties can be bred to create new varieties.

However, 100 years of prohibition paved the way for a flourishing underground market, so unlike Cabernet Sauvignon, there’s no trademark nor standards to define Strawberry Cough or Grand Daddy Purple — or any other strain for that matter. Anyone can name their marijuana strain whatever they want, and no one can really raise a legitimate objection. There’s even a 2020 study that suggests strain names don’t mean much.

Another example of how prohibition influenced cannabis history is the limited access to knowledge about the plant. For instance, the misconception about (and popularity of) the term “strains” in order to describe different varieties. A strain is a term used in microbiology and has no official ranking in botany. The proper way to distinguish between cannabis varieties is actually by their chemical composition, which is why the term “chemovar” (chemical variation) is becoming increasingly popular.

Cannabis chemovars can be divided to three main types:

Just like the term chemovar, these categories are still catching on in the mainstream — so you’re likely to see more of them as legal markets develop.

The misconception about sativa and indica is yet another result of the lack of cannabis research and education during prohibition. Most people — even within the cannabis industry — tend to believe that sativas are more uplifting and energizing, while indicas are sedating and calming. Recreational consumers and patients alike often wonder what would be best for them — indica, sativa or hybrid.

In fact, these are botanical terms, used to define morphological differences such as plant shape and height, rather than effects. Which cannabinoids and terpenes are present in a chemovar (and in what concentration) is the best predictor of its potential effects — not its indica or sativa origins.

The role of cannabinoids and terpenes

Cannabinoids and terpenes are the most abundant compounds in cannabis. They are also the most talked about, and you’re more than likely to encounter them during your next dispensary visit. Knowing more about these molecules could help you find the right product for you.

What you need to know about cannabinoids

THC and CBD are the two major cannabinoids in cannabis. THC is often regarded as dangerous, and CBD as therapeutic, but actually they both play a leading role in the therapeutic potential of chemovars as well as the high they produce.

THC is the main intoxicating chemical in cannabis, and it also has therapeutic applications for conditions and symptoms such as pain, nausea, stress, spasticity and sleep disorders. Type I chemovars can be divided to three categories according to their THC concentration:

CBD is known mainly for its seemingly endless list of medicinal properties, potentially aiding in conditions such as inflammation, anxiety, epilepsy and Autism Spectrum Disorder (ASD). Lesser known is the exact nature of CBD’s interaction with THC. Most research suggests that CBD may be able to mitigate some side effects caused by THC, like anxiety or attention-impairment. Urban legend claims taking CBD can make you feel stoned, but most studies have found that combining THC and CBD is no less intoxicating than the same dose of THC alone. Other research suggests that this interaction could be dose dependent, so for example in an 8:1 (CBD:THC ratio) product, CBD can reduce the high from THC, but in a 1:8 ratio, it actually potentiates the high. Keep in mind, however, that study is not without its limitations (for instance, the participants were rats).

Minor cannabinoids such as CBG, CBN, THCV and CBDV appear in much lower concentrations in cannabis, and there’s very limited scientific literature about their effects and applications. That said, interest in these molecules is rapidly increasing and science is building quickly. THCV has been studied in Type 2 diabetes and was shown to modestly improve fasting blood glucose and improve pancreatic function, but THCV pharmacology is complex and low doses of THCV may work differently than higher doses.

Why are terpenes important

Terpenes are another important type of bioactive molecule found in cannabis. Similar to cannabinoids, some researchers suggest they can influence your high, and also help to achieve the desired therapeutic effect. Unlike cannabinoids though, they can be found in many other plants. You might not realize it, but you’ve probably already consumed all of the main terpenes in cannabis.

The citrusy aroma of lemons, grapefruits and oranges, for example, is thanks to limonene, one of the most common terpenes in cannabis. It is believed to produce an energized high and could potentially help treat conditions such as anxiety, pain, depression, arthritis, and MS. Beta-caryophyllene (BCP) is another common terpene in cannabis that is also found in herbs and spices like black pepper, cinnamon, and rosemary.

The mysterious synergy in marijuana

The entourage effect theory suggests that cannabinoids and terpenes may work synergistically to potentiate some effects. For example, both THC and myrcene are muscle relaxants, limonene and BCP show potential for inflammatory conditions such as ulcerative colitis, and linalool and pinene for anxiety. This information can help you narrow down the possibilities of cannabis products when looking for the right one. Keep in mind that other factors, such as your metabolism, unique genetics, age and gender, and also consumption method can also play a role in whether or not marijuana will help you. Furthermore, the majority of scientific data about these compounds is based on preliminary research, which means the evidence isn’t very strong yet and should be taken with a pinch of salt.

Finding the right strain for you can be achieved in five simple steps:

No tricks here, you’ll have to try weed at least once. If smoking or vaping, preferably a Type II or III chemovar, take a puff and wait for 10-15 minutes to see how you react to a specific amount of THC (e.g. one puff of a 10% THC product).  If that one puff doesn’t do the trick, try 2 puffs on your next attempt. Remember that if you’re consuming orally instead of inhaling, you should wait significantly longer (at least 3 hours) before taking your next dose to ensure you don’t overdo it.

But keep in mind that how much THC you actually consume is more important than the THC concentration of the product. For instance, a joint made with one gram of 12% THC cannabis flower, equals roughly 120mg THC, while two joints made with one gram of 6% THC flower in each would have the same amount of THC in total (120mg).

You may be looking for cannabis strains for different reasons. Some are looking for a good night sleep, others for pain relief or treating seizures, while some just want to enjoy an evening joint on the couch. One thing that could help you identify the best chemovar for you is defining the effects you’re looking for so that you can look for related chemovars.

Since the scientific literature on cannabinoids and terpenes is preliminary and limited, the best use of this information is to learn about the ones that are more likely to produce your desired effect and narrow down the possibilities.

For example, when looking for an energizing chemovar, something high in terpinolene and limonene is more likely to be energizing compared to others according to the existing scientific literature, but that doesn’t mean it will definitely be.

Keep in mind that if getting high isn’t a priority, Types II and III are often preferred in order to better dose and potentially avoid some of THC’s side effects. If Type II or Type III cannabis is not available to you, Type I cannabis can also be useful, but it’s important to go slow and be mindful of dose.

Terpenes are what determine the aromas and flavors of cannabis, and the most common in cannabis are myrcene (herbal), caryophyllene (spicy), pinene (woody), limonene (citrusy), linalool (floral), humulene (earthy), terpinolene (floral) and ocimene (floral). If you’re allowed, ask the budtender if you can smell the cannabis. As a rule of thumb, if it smells good to you it will likely feel good when you consume it.

After you choose the type of cannabis and the most appealing terpenes, look for strains with similar profiles.

For example, if you’re a first timer and looking to treat symptoms of crohn’s disease on a work day, a Type III variety that’s high in limonene (and preferably low in myrcene, BCP and linalool) would be a good bet. For nighttime, you could try a Type III product which is high in BCP or linalool and with little or no limonene.

Whereas if you know you have a high tolerance and you’re looking for pain relief, Type II high in limonene would be your best bet for activity hours, and Type II high in myrcene, BCP, linalool, or humulene for night time.

If you live in a country/state with a regulated market, once you’ve identified the kind of chemovars that work best for you, it’s wise to note both the chemovar profile and the cultivar lineage as well. Sticking to products from reputable producers using stabilized genetics may lead to more consistent results from cannabis you purchase in the future.

It’s all about trial and error

The cannabis industry is extremely young, but it’s rapidly developing. Advances in technology and regulation will likely mean that products with designated effects will be available in the near future. In the meantime, your best bet is to follow the science, ask around, and practice (and potentially even enjoy!) some trial and error.

Regulation Is weed legal in Thailand?
Previous Article What are cannabinoids? Next Article The history of medical cannabis in ancient China
The Cannigma uses cookies to improve your experience and to show you personalized adsACCEPTPrivacy Policy
Manage consent