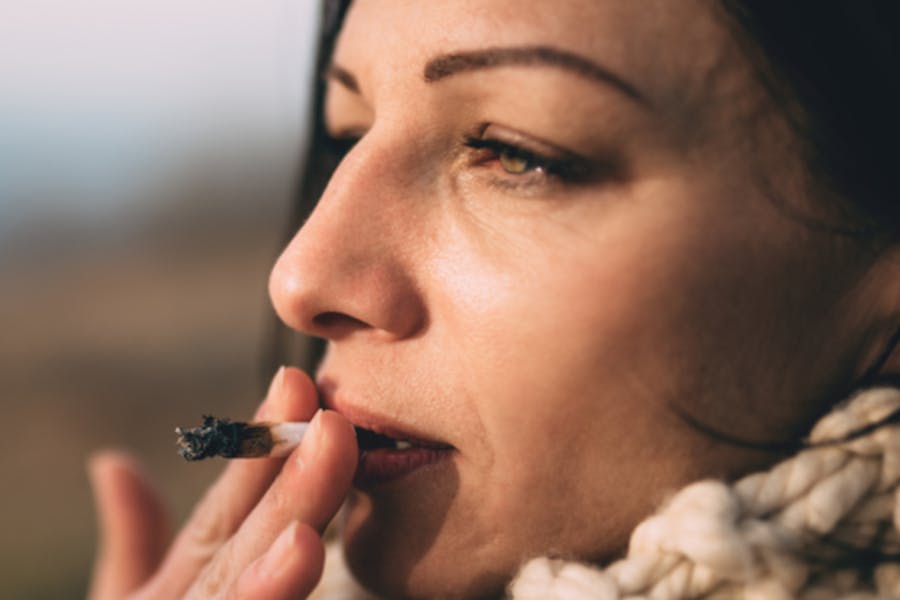 When it comes to cannabis, there’s a lot of contradictory information out there on whether the plant can be addictive or not. On one extreme, there’s the “Reefer Madness” hysteria that claims cannabis is a dangerous and destructive drug. On the other side, there are people that claim cannabis is a perfect medicine that is impossible to get addicted to.

But the truth is that cannabis can be addictive for some, and not at all to others. The majority of people that use marijuana — either recreationally or medicinally — will not become addicted. However, it is absolutely possible for a person to become addicted to using cannabis.

Scientific research indicates that, yes, cannabis can be addictive. About one in 10 people that use cannabis will develop an addiction, according to a 2018 study conducted by Columbia University and the New York State Psychiatric Institute.1

Cannabis users may develop a physical, psychological, and/or social dependence. Physical symptoms of dependence can include discomfort such as weight loss, headaches, mood swings and/or abdominal pain when a user stops consuming cannabis regularly.

Psychological symptoms may present as irritability, anxiety, insomnia, etc. A social dependence means a user finds difficulty refraining from using marijuana in social settings, unable to abstain if others are partaking around them and only socializing in contexts that are conducive to their cannabis consumption.

The Diagnostic and Statistical Manual of Mental Disorders (DSM-5) now recognizes cannabis addiction as a “cannabis use disorder,” defined as “the continued use of cannabis despite impairment in psychological, physical, or social functioning.”2

Basically, when someone continues to regularly use cannabis despite its negative consequences on their life, they may have developed a loss of control over their use and could be addicted to cannabis. Those with cannabis use disorder may not be aware that this has happened, and they may not even be aware that their behavior is causing problems for themselves and others.

It is estimated that about 22.1 million people globally (that’s about 0.3% of the world’s population) suffer from a cannabis use disorder.

THC is the chemical component in cannabis that causes the altered state or feeling of being high. THC acts on CB receptors all over the brain and body. Some of the receptors are in a part of the brain known as the reward pathway. By activating this reward pathway, the drug taking behavior is reinforced. Tolerance to this high builds quickly however, so dose escalation is necessary to continue to achieve the same psychological effects. It is this high that those with cannabis use disorder are chasing, often prioritizing cannabis over other important activities. Therefore, yes, THC can be addictive.

According to research conducted by the United States National Institute on Drug Abuse, cannabis strains containing high levels of THC and low levels of CBD (also known as Type I cannabis) have been found to produce stronger reinforcing effects. This means that high-THC cannabis strains cause higher ratings of enjoyment, which could potentially make these strains more addictive.3

Is CBD and CBD oil addictive?

A growing number of people have been using cannabidiol (CBD) oil to help combat a wide range of ailments, including chronic pain and inflammation, epilepsy, anxiety, and more.

While THC can be addictive, there is no evidence that suggests CBD is addictive. In fact some early studies have suggested anti-addiction properties of CBD.4

A 2017 double-blind study published in the Journal of Drug and Alcohol Dependence analyzed the abuse liability profile of CBD by administering various oral dosages of CBD to frequent cannabis users by itself and in combination with smoked cannabis(Type I) that contained ~5.5% THC. The research team concluded that while the THC-containing cannabis did reliably produce abuse-related subjective effects because it produces a “high” that users may become reliant upon, CBD did not display any signs of abuse liability.5

Interestingly, there is evidence that suggests CBD could be actually used to help combat cannabis use disorders. A 2010 study conducted by University College London examined 94 marijuana users that smoked either THC-dominant (Type I) or CBD-dominant strains of cannabis then tested them on dependence-related measures. The researchers found those that smoked the high-CBD cannabis may be less likely to become dependent on cannabis than those who consume  high-THC cannabis. As a result, the researchers concluded that CBD has potential as a treatment for cannabis dependence.6

Who’s at risk of developing a marijuana  addiction?

There are several factors that may contribute to developing a cannabis use disorder:

Scientists have concluded that genetic factors can play a major role in the progression from general drug use to abuse and dependence. Addiction can run in families, so if your family has a history of addiction, this is something to be aware of when using cannabis. It doesn’t mean that you’ll definitely develop a cannabis use disorder — it just means you’re at a higher risk.7

Mental health is a big fisk factor when it comes to cannabis addiction.

Dr. Alex Stalcup, the medical director of the New Leaf Treatment Center in California, shared in an interview with Healthline that an estimated 50% to 60% of patients that come to treat a cannabis addiction at the treatment center has an underlying mental health condition, such as:

At first, cannabis can often serve as a potent medicine to help mitigate the negative effects of a mental health condition. But if high-THC strains are used too frequently or at too high of a dose, a tolerance will likely build. Increasing doses can lead to physical dependence similar to many other medications. It is important to recognize that while not dangerous, cannabis addiction can develop and withdrawal symptoms can occur when trying to cut back.

According to scientific research conducted by the University of Minnesota, people who start using cannabis before the age of 18 are four-to-seven times more likely to develop a cannabis use disorder than adults. As the adolescent brain is developing, so is the endocannabinoid system. Introducing something into the brain while its developing certainly can have a lasting impact.

When it comes to substance abuse of any kind, addiction rates are dramatically increased among those that lack a good social network, steady job, and family ties. There is evidence that suggests addiction can stem from social and emotional isolation. Therefore, cannabis users that don’t have a healthy community around them could turn to frequently misusing cannabis. Conversely someone with cannabis use disorder may disengage from their relationships or social commitments that are not cannabis oriented. Importantly this applies to substance use in general and cannabis is just one expression of this problem.8

Signs and symptoms of a marijuana addiction

According to the DSM-5, a person with a cannabis use disorder will display at least two of the following symptoms within a 12-month period:9

The best way to successfully treat a cannabis use disorder is to seek professional help.

Psychological interventions that have been proven to be useful in dealing with cannabis dependence include:10

Going “cold turkey”, or stopping cannabis use completely, is another method. For heavy users, this will mean withdrawal symptoms can occur, including but not limited to:11

Withdrawal symptoms usually last one to two weeks before subsiding. A gradual decrease as opposed to an abrupt stop of cannabis use altogether is likely to decrease the discomforts of withdrawal. While these withdrawal symptoms can be uncomfortable, they are relatively mild compared to other addictive substances, and most people are able to manage them without intervention.

So far, no medications are approved or have been found effective for the treatment of cannabis use disorders, according to a 2019 Australian study.

Is cannabis a gateway drug?

While some studies have shown that cannabis use is likely to precede the use of harder drugs and the development of addictions to other substances, the simple truth is that the vast majority of cannabis users do not go on to become hard drug addicts. This was a scare tactic invented by the Federal Bureau of Narcotics to justify the growing War on Drugs in the 1960s.

In fact, science suggests that the opposite can actually be true. Cannabis has been shown to serve as an “exit drug” — meaning cannabis can be a useful tool for helping people get rid of their addictions to substances ranging from opioids and benzodiazepines to tobacco and alcohol.

While the vast majority of cannabis users will not become addicted, it is true that around 9% of people that use cannabis develop a cannabis use disorder.

It is important to be aware that it is possible to become dependent upon cannabis, even if it has been prescribed medically — just as it is possible for patients to become addicted to their prescribed pharmaceuticals. Fortunately the risks of taking too much cannabis are relatively minor compared to prescription medications and the withdrawal symptoms are more similar to caffeine than prescription meds.

Stiil, if you are in the approximately one-tenth of users who have become addicted to cannabis, consider reaching out for help from family and loved ones and seek out a medical professional. There are many different existing psychological interventions these days designed to help those with cannabis use disorder.