The story of Bubba Kush reportedly begins with an unknown bloodline in New Orleans and a man named “Bubba.” And while that might give off a Tennessee Williams in a headshop vibe, “Bubba” is actually a guy named Matt and this mysterious strain’s mother plant was (allegedly) Northern Lights. What is undeniable is that for a little over two decades, Bubba Kush has been a wildly popular indica-dominant strain known for its deeply relaxing effects, pungent aroma, and dense, dark green buds. 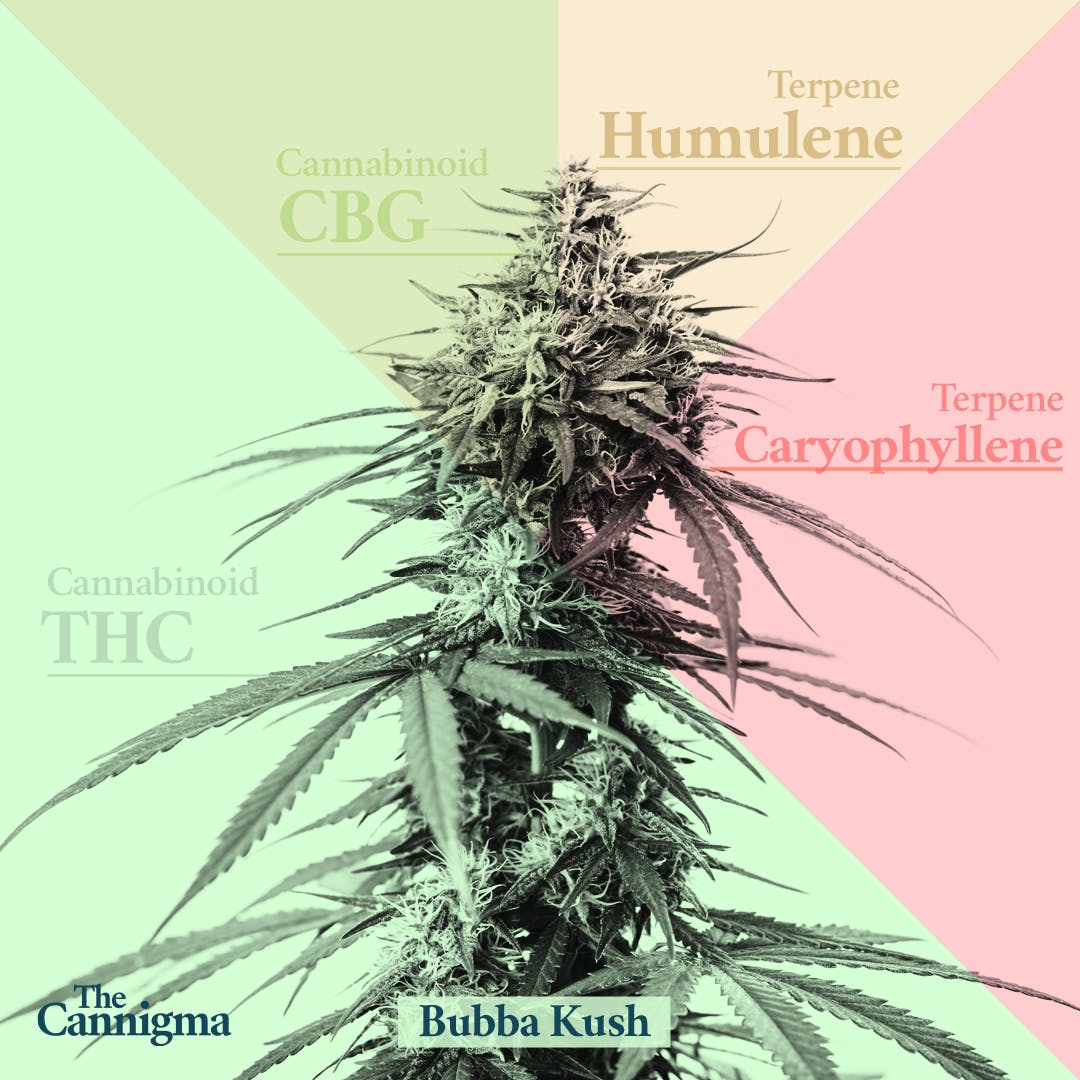 The origin story of Bubba Kush is often traced back to creator Matt “Bubba” Berger. Born in Delaware, Berger grew up in Florida, where in his teen years, like so many before him, he tried and failed to grow marijuana in his backyard.

In an interview with The Cannigma, Berger referred to himself as “one of the 6 original godfathers of the OG Kush” and the creator of Bubba Kush.”

Berger said that the lineage of the original Bubba plant was some Northern Lights seeds he got from “my buddy’s frat brother Fat Larry who had all his weed shipped to Tulane (Tulane University, New Orleans) from Norcal.”

Around 1997 it was pollinated by a Kush plant that Berger said he found in a bag of Supernaut that he and his friends got in South Florida and grew in Gainesville.

The strain became a hit.

According to High Times, “within six months, the Kush Kraze was raging; nobody wanted anything else. Rappers, rock stars and actors all came to Silver Lake just for the Kush. “We were getting $8,000 a pound, and people were paying months in advance to make sure they didn’t miss out on a crop,” Bubba boasts. “We had it good. We used Kush for everything — lift tickets, show tickets, restaurants, you name it. We’ve given cuts to hundreds of people, and they’ve given it to two friends who gave it to two friends. Soon, everyone was growing the Kush.”

Berger said that the Bubba strain “gave me the sensation of walking through a magical forest covered in sagey and minty bushes,” and this was lost a bit when he combined it with the kush. Regardless, he really loves the Bubba Kush flavor and the high, which he describes as “tranquil and serene. Always can take the edge off the day or enjoying a show.”

Among fans, “Pre-98 Bubba Kush” refers to flowers with the original strain’s genetics, which many say has been “diluted” over the years. Berger said he prefers calling these strains “the 97” Bubba Kush.

When it comes to the cannabinoid concentrations of Bubba Kush, Burger says that “THC levels usually tested between 17-20% rarely going over 20%. I think we got like 22 once. The CBD levels were always in the 3-4’s. It has an amazing cannabinoid profile which lends to its heightened medical benefits.”

Bubba Kush has purple leaves and produces dense, forest green buds. It is known for having a pungent, earthy aroma and a sweet flavor with strong hints of chocolate and coffee.

Cannabinoids and terpenes in Bubba Kush

Cannabis varieties like Bubba Kush are often referred to as strains or cultivars, but in fact the most accurate term would be “chemovars.” Strain refers to bacteria and viruses, and cultivars is an abbreviation of “cultivated variety,” one that has been intentionally created or selected and maintained by cultivation.

But it’s virtually impossible to identify a cultivar’s effect (uplifting, sedating, etc) judging by botanical traits such as height, shape and color. A chemovar is a “chemical variety,” defined by its chemical profile. In short, this term uses levels of chemical markers such as cannabinoids and terpenes, to distinguish one cultivar from another.

Talking about the chemical profile of a given cannabis variety can be tricky. There’s no standard definition for any strain from a chemical perspective. In theory any grower can cultivate any strain of cannabis with any kind of chemical profile, and name it however they wish. So it’s difficult to definitively state the THC, CBD or CBG content of Bubba Kush.

For this report, we gathered Bubba Kush’s chemical profile from a variety of third party certificates of analysis, seed banks and marijuana websites such as Wikileaf, Leafly and ILGM.
The following numbers can give you an estimation of what you could expect to find in the Bubba Kush chemovar, but your best bet is always going to be looking for a certificate of analysis before you choose a cannabis product — this way you’ll know for sure what’s in it.

Myrcene 0.15%
* The numbers in the tables are averages of data from multiple resources
** Terpenes are of pharmacologic interest at concentrations above 0.05%

From the reports we found about the cannabinoids Bubba Kush:

As for the terpenes in Bubba Kush:

How Bubba Kush affects you

Bubba Kush is a powerfully sedative strain known for producing a strong “couch lock” sensation. This is not a daytime, let’s focus on a complicated task sort of strain. Bubba Kush is for unwinding at the end of the day. It is considered a pure or predominantly india strain though there is no real way to measure the indica/sativa levels of a cultivar. When labeling a cannabis strain as 80% indica, it just means the person breeding it had a subjective experience of “80%” indica effects when he first smoked it.

Bubba Kush is a preferred strain for dealing with insomnia and pain. It’s strong enough to relieve serious discomfort, and can ease muscles and help even restless users get a good night’s sleep. Bubba Kush is also known for producing a strong euphoric effect, which can be effective in the treatment of stress or depression.

Bubba Kush can cause “cottonmouth” and red eyes, and another side effect — if you see it that way — is that it can really sap your desire to get off the couch. That said, it is said to have less of the anxiety or paranoid effects often associated with sativa varieties.

Bubba Kush is an easy-to-grow strain suited for novices and experienced growers alike. It typically grows short and is a high yield plant, with around 17 ounces of dense buds per successful plant and around 15 ounces per square feet  when grown indoors. It usually flowers between 7 to 9 weeks, and can produce even higher yields in hydroponic grows.

It is suited to both indoor and outdoor grows and its short stature is perfect for growing in small interior spaces and outdoors where you don’t want the neighbors to see. It is also a hardy plant that can be resistant to pests as well as mold and mildew.

One tricky thing about growing Bubba Kush is that it grows a lot of very wide leaves that need to be trimmed so they don’t block light to the buds in the center of the plant.

For best results, you should make sure the plants get enough nutrients in addition to water.

While the exact lineage of Bubba Kush hasn’t quite been nailed down, according to the founder it comes from what he was told were Northern Lights seeds.

Other sources say it’s a mix of OG Kush and Bubblegum or OG Kush and a Kush strain — among other theories. Various online sources have compared it to a number of other strains, including Master Kush, Blue Cheese, Skywalker OG, and White Widow.