The name evokes snow covered peaks in Central Asia, a hill station in the Himalayas, or a cannabis field in a valley in Afghanistan, rich with the aroma of chai and marijuana. Hindu Kush is a potent indica “landrace” strain named after the mountain chain in central Asia, and it is prized for the strong, relaxing high it produces. 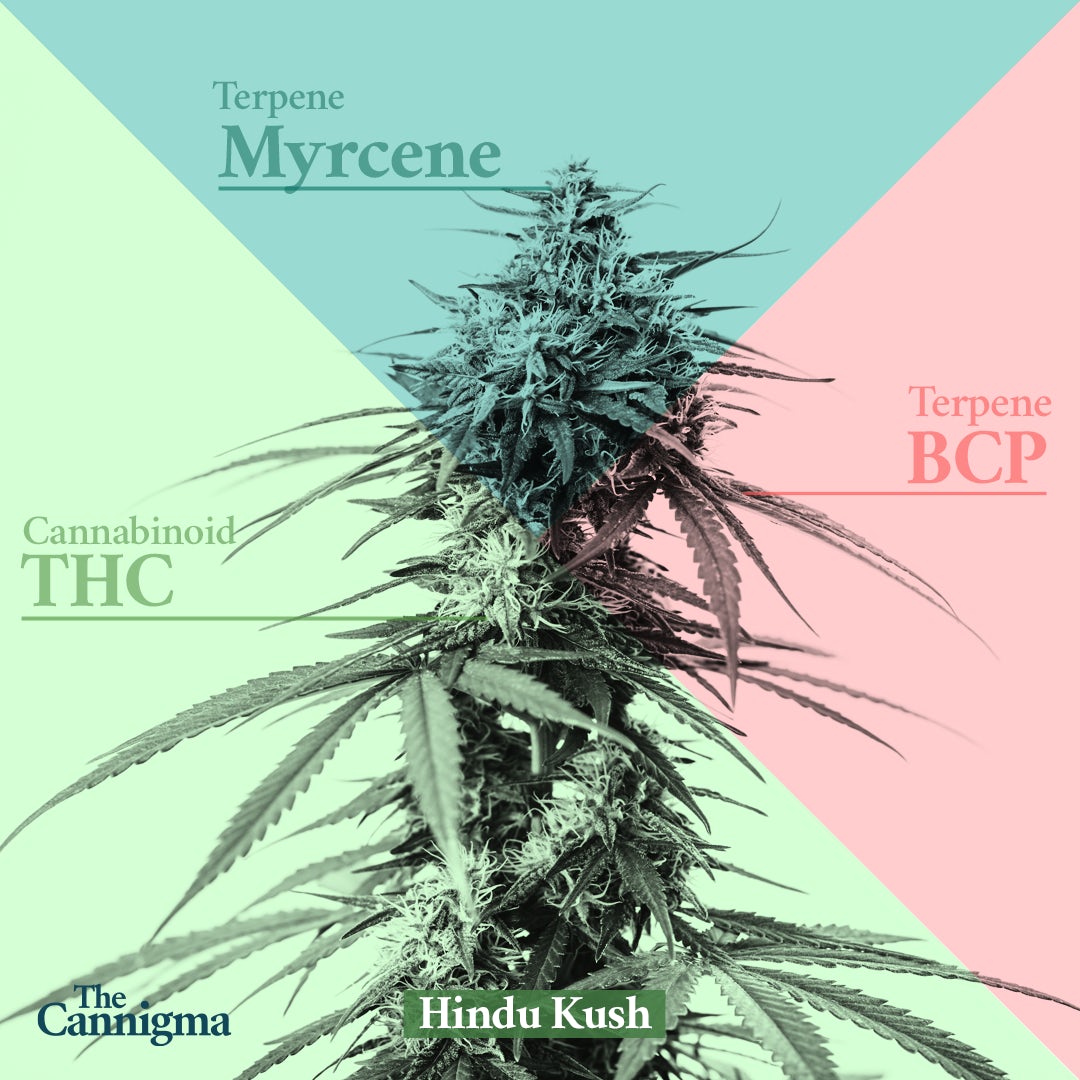 Hindu Kush is an indica landrace strain named after the mountain range in Central Asia where it originates. Seeds of Hindu Kush and other landrace strains from the area made their way back to the United States from travelers on the “hippie trail” in the 1960s and 70s, and over the years these seeds were crossed with all types of other strains.

While the origin of the name “Kush” is disputed, over the years it has become synonymous with marijuana and stoner culture. Today there are dozens of kush strains available, including the wildly popular and iconic OG Kush, as well as other big names like Afghan Kush and Platinum Kush.

Hindu Kush is a hardy strain that reflects the rough and tumble region where it originated. It is highly resistant to the elements and grows short with large, dense flowers that are covered in crystals.

The strain is known for having an earthy, sweet aroma, that many users compare to hash. According to the chemical profile we identified, the most abundant terpenes in Hindu Kush are beta caryophyllene, limonene, myrcene and humulene, which should give it a spicy, citrus, floral or earthy aroma (or a mixture of these).

Cannabinoids and terpenes in Hindu Kush

Cannabis varieties like Hindu Kush are often referred to as strains or cultivars, but in fact the most accurate term would be “chemovars.” Strain refers to bacteria and viruses , and cultivars is an abbreviation of “cultivated variety,” one that has been intentionally created or selected and maintained by cultivation.

Talking about the chemical profile of a given cannabis variety can be tricky. There’s no standard definition for any strain from a chemical perspective. In theory any grower can cultivate any strain of cannabis with any kind of chemical profile, and name it however they wish. So it’s difficult to definitively state the THC, CBD or CBG content of Hindu Kush.

For this report, we gathered Hindu Kush’s chemical profile from a variety of third party certificates of analysis, seed banks and marijuana websites such as Wikileaf, Leafly and ILGM.
The following numbers can give you an estimation of what you could expect to find in the Hindu Kush chemovar, but your best bet is always going to be looking for a certificate of analysis before you choose a cannabis product — this way you’ll know for sure what’s in it.

From the reports we found about the cannabinoids Hindu Kush:

As for the terpenes in Hindu Kush:

How Hindu Kush affects you

Hindu Kush is known for causing a deep, calming high that wraps the user in its embrace. It’s a nighttime sort of strain, best for the end of the day, or the type of strain you can picture smoking somewhere in a mountain pass, huddled around a fire with a hot cup of tea. Your couch will probably do just fine too.

The calming, relaxing effects of Hindu Kush make it a great strain for insomnia and stress. It also creates a very euphoric high, like a warm blanket that also might make you want to raid the fridge.

Hindu Kush is easy to grow indoors or outdoors if you live in a warm climate. Like classic indicas, it grows shorter and stockier, rarely more than 5 feet tall. This makes it easy for growing outdoors behind a typical fence or fitting into small places indoors.

You’ll want to keep humidity and moisture low for this strain, which prefers a dry climate.

The strain grows large, hard and aromatic buds that are covered with crystals and resin. It typically flowers in around 7-9 weeks, and is a high yield plant and outdoor grows are capable of producing around a pound of flower per plant.

There are dozens and dozens of kush strains, like OG Kush, Purple Kush, and Afghan Kush, to name just a few. Kush strains are typically indica or indica dominant, with dense buds that produce a strong “couch-lock” feeling. Not all of them may be actual kush strains and the term has in recent years become a bit diluted and — as slang — can refer to marijuana in general.

Regardless, the impact and genetics of this landrace strain have left their mark on countless other types of cannabis that make a great substitute. According to Leafly, Hindu Sour and Grand Hindu are direct descendents of Hindu Kush. And according to the book Cannabis Pharmacy some similar varieties are Afghan, Afpak and Hindu Skunk.