Gas, Sour Deez, Sour D — there are a lot of nicknames for this wildly popular sativa-dominant strain, which has long been a pop culture phenomenon in cannabis and music. The strain gets its name from its pungent, gas like aroma and the strong, sour flavor when inhaled. It is also known for being often very high in THC, and for the energetic, euphoric high it can produce. It was crowned by High Times as one of the 25 Greatest Strains of all Time, and has been mentioned in no shortage of song lyrics. It isn’t hard to understand why. 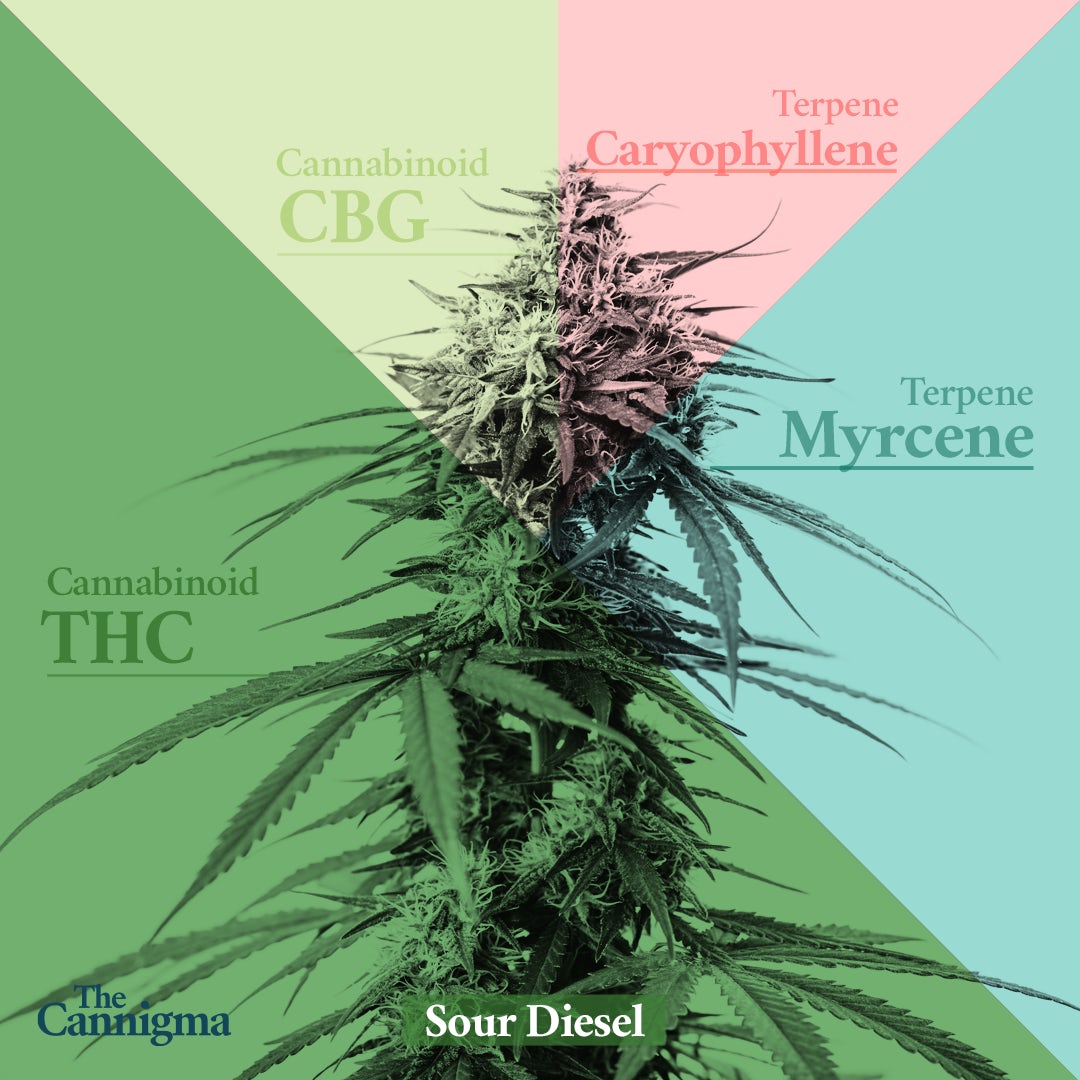 Like many popular strains, a certain measure of myth and legend surrounds the creation of Sour Diesel. According to the book Cannabis Pharmacy, the seeds of Sour Diesel “are said to have been plucked from a single bag of legendary cannabis sold at a Grateful Dead concert in Indiana, in July 1990,” and the cannabis genetics of that bag are said to include strains such as Chemdawg and OG Kush.

A 2014 book about a Yale graduate and drug dealer named Robert Peace asserts that Peace “used his knowledge of chemistry to concoct his own marijuana strain, Sour Diesel, for which he became well known in the drug trade.” Another origin tale states that in the early 90s, the strain was created by accident when a crop of the strain 91 Chemdog was pollinated by a Northern Lights Skunk mix. Others still assert that the strain is simply a phenotype of Chemdawg that leaned more sativa than indica.

Sour Diesel is known for producing a powerful, energetic high that is more suited to the daytime hours. With its pungent aroma it’s not the most discrete strain to smoke, but on the other hand, that strong, gasoline and citrusy smell is also one of the things that its fans most appreciate about it.

Cannabinoids and terpenes in Sour Diesel

Cannabis varieties like Sour Diesel are often referred to as strains or cultivars, but in fact the most accurate term would be “chemovars.” Strain refers to bacteria and viruses, and cultivars is an abbreviation of “cultivated variety,” one that has been intentionally created or selected and maintained by cultivation.

Talking about the chemical profile of a given cannabis variety can be tricky. There’s no standard definition for any strain from a chemical perspective. In theory any grower can cultivate any strain of cannabis with any kind of chemical profile, and name it however they wish. So it’s difficult to definitively state the THC, CBD or CBG content of Sour Diesel.

For this report, we gathered Sour Diesel’s chemical profile from a variety of third party certificates of analysis, seed banks and marijuana websites such as Wikileaf, Leafly and ILGM.
The following numbers can give you an estimation of what you could expect to find in the Sour Diesel chemovar, but your best bet is always going to be looking for a certificate of analysis before you choose a cannabis product — this way you’ll know for sure what’s in it.

From the reports we found about the cannabinoids in Sour Diesel:

As for the terpenes in Sour Diesel:

How Sour Diesel affects you

Sour Diesel is known for producing an energetic, euphoric high that can boost energy levels and improve mood in moments. It’s an uplifting strain that produces a strong cerebral high and not the “couch lock” feeling associated with indica-dominant strains.

Because of the strength and duration of the high, this can be an effective strain for people treating pain throughout the daytime. The energetic feelings can also help those coping with depression and/or lethargy.

Strongly energetic and highly-stimulating strains aren’t for everybody. People who find that they get paranoia or anxiety when they smoke, may prefer a strain known for more tranquilizing effects. Sour Diesel can also cause dry mouth and dry eyes, and make you extra thirsty.

It is worth noting that ultimately, differentiating one cannabis strain from another is based on the chemical profile, but as mentioned, there are no uniformed standards for strains and their profiles. Additionally, we are all built differently, and there is not the same level of oversight in the cannabis industry as there is for manufactured pharmaceutical drugs. The effects of Sour Diesel can differ from person to person.

According to Cannabis Pharmacy, Sour Diesel is a “huge producer” when cultivated well, but it can take as long as 12 weeks to flower.

Sour Diesel grows best in a warm, dry climate, so reducing humidity is a must. It is a tall-growing plant, like many sativa varieties, and can grow over six feet tall outdoors. This may make it arguably not the most discrete plant for growing in a visible backyard. The height can also be a bit tricky to manage, requiring pruning on the part of the grower.

The size of Sour Diesel also makes it a less than ideal strain for indoor grows. It is also a “hungry strain” and requires heavy feeding and nutrients throughout the grow.

There are a number of strains similar to Sour Diesel in effect, genetics, aroma and taste. These include strains like New York City Diesel and East Coast Sour Diesel, just to name two of the “Diesel” family of strains.

Chemdawg has often been linked to the parentage of Sour Diesel, and related strains like Chem 4 and Alien Dawg can also have similar effects as well as aroma and flavor.

According to Leafly, the parents of Sour Diesel are Chemdog 91 and Super Skunk, and its discontents are Diesel Duff and Champagne Diesel.

Ask the Expert Can I substitute coconut oil for vegetable oil in weed gummies?
Previous Article Strawberry Cough Next Article ACDC
The Cannigma uses cookies to improve your experience and to show you personalized adsACCEPTPrivacy Policy
Manage consent