Home Delivery What is hash and how do you make it? 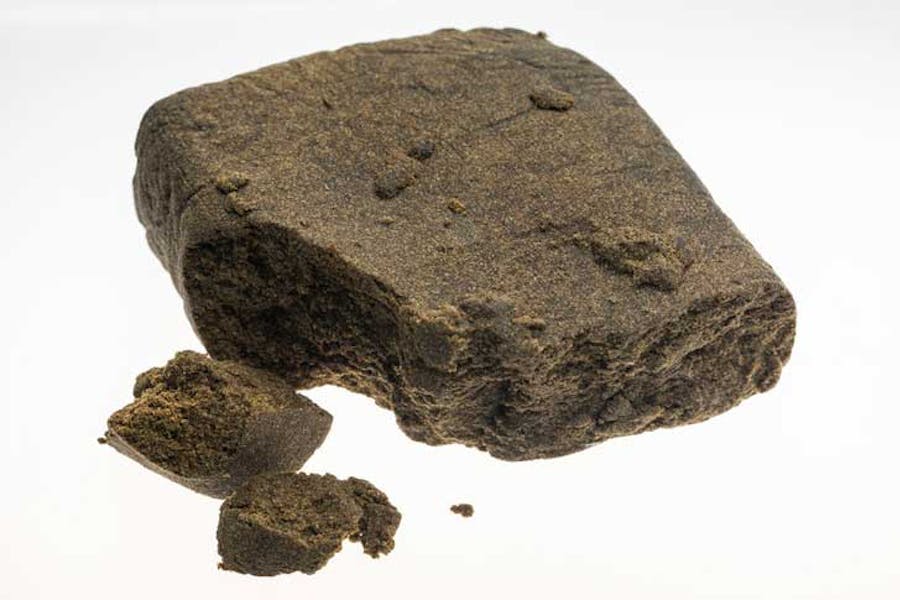 A block of Moroccan hashish (jackmalipan/123rf)

Hashish or just hash, is a potent cannabis concentrate made by extracting the resin from cannabis plants and working and pressing it into solid form. It can take the form of spheres (like Nepalese temple ball hash), bricks or “cakes” like the hash made in North Africa and the Levant, and dark, sticky fingers or balls like the charas popular throughout the Indian subcontinent.

Which hash is the finest depends on who you ask. There are those who prefer the dark, sticky charas of the Himalayas or the potent hash of many an Afghan mountain valley, while countless people – especially in Europe – swear by sweet, often blond Moroccan hashish. Whichever hash you have, it should have a fragrant, rather spicy aroma, an earthy flavor, and a high that makes you want to curl up with a hot cup of chai at a Hindu Kush hill station and ask “what is snow if not the tears of G-d, frozen as they cascade to Earth?”

The building blocks of hashish can be found on the flowers and leaves of cannabis. Glandular trichomes, the sparkly crystals that cover potent cannabis flower (and the “sugar leaves” that sprout from buds), are a form of resin that contains the cannabinoids and terpenes produced by the plant. This resin is responsible for the high of cannabis, as well as the flavors and aromas that set different cannabis chemovars apart from the crowd.

Once removed from the plant, this resin can be collected and processed into hash using a variety of methods — including ones that have been with us since antiquity.

What is the difference between hash and weed?

When people say “weed” or “pot,” “herb,” and so on, what they are referring to are the flowers of the cannabis plant. Other than drying, curing, and trimming, cannabis flower doesn’t go through any other sort of processing before it makes it to your joint. Hash on the other hand is the byproduct of removing cannabis resin and processing it into a concentrate. While both cannabis flower and hashish come from the cannabis plant, that is where the similarities end.

The different types of hash

From the Himalayan foothills to the back alleys of Cairo and the Rif mountains of Morocco, hash has been an international phenomenon for centuries.

When we look at (really) old school hash, they tend to take a few forms. In North Africa and the Levant, cannabis plants are harvested and dried, after which the buds are worked by hand until the dry trichomes – what is often called kief – separates from the flowers. The kief is then collected and pressed into bricks or “cakes” of hash.

Perhaps the oldest form of hash is Charas – very similar to Nepalese Temple Balls – which is traditionally made by taking fresh (not dried) cannabis buds and rolling them between your hands gradually for hours to let the resin accumulate on your palms, where it is later collected and pressed into “fingers” or balls.

Dry sift hash is basically the method used in North Africa and the Levant, and involves taking dried buds and removing the trichomes so they can be collected and processed. Dry sift hash is usually made using a fine or micron screen, and working the buds over the surface like a gold prospector, if a bit more productive.

The name “bubble hash” comes from the method used to make this type of hash, which is also referred to as “water hash.” The process involves using ice, water, and filter bags to remove trichomes from cannabis flower and trim, which can then be easily dried and pressed into hash.

Rosin is a very popular cannabis concentrate which is made by using heat and pressure to extract resin from the plant matter, in the form of a syrupy sap. This form of hash oil can be as potent as lab-produced, solvent-based cannabis extracts, and can be dabbed with ease – and to potent effect.

How do you smoke hashish? 3 methods

The consistency of hash – typically in the form of a piece removed from a solid chunk or sphere – means it can’t be broken up and smoked as easily as dried cannabis flower. And because of its high potency, you wouldn’t need that much anyway.

Smoking hash takes a little bit of work, but there are several easy and effective methods.

1. In a joint or cigarette

A small piece of hash can be heated with a lighter in the palm of your hand — or while resting on a piece of foil — until it becomes soft and supple and breaks down easily. Crumbled up hash can then be sprinkled in a joint or a hand-rolled cigarette and smoked with ease. If it’s especially sticky and hard to break down – like charas typically is – one option is to take a small piece and roll it between your hands until you have a long, toothpick-sized piece that you can then place inside a joint or cigarette.

Two methods that could have you feeling like MacGyver are the hot knives method and the paperclip and glass trick. Both serve as ways to smoke a small piece of hash without mixing it with marijuana or tobacco.

Simply heat up the ends of two butter knives on your stove until they get very hot. Take a pair of tweezers or a paper clip and place a small piece of hash on one of the knives and press the other hot tip over it. Press the hash between the two knives and inhale the smoke that it produces. You can have a partner hold the knives while you place an empty plastic bottle above the knives to catch the smoke and funnel it to your mouth.

If you have a small glass and a paperclip and straw, an easy method is to bend the paper clip until one side is sticking straight up while the paperclip rests on the table. Place a small piece of hash on the end of the paperclip and light it until it burns on its own for a second. Blow out the flame and cover the paperclip and hash with a small glass. After it fills with smoke, place a straw under the bottom of the cup and lift it slightly, inhaling powerfully through the straw. Both of these methods work wonders and allow you to get a clean, potent hit of pure hash smoke.

3. Top off a bowl with hash

A very easy and straightforward method of smoking hash is to simply take a small sliver of hash and place it on top of a bowl of cannabis in your pipe or bong. It may take longer to burn than the herb it rests on, but you’ll find it an effective and memorable way of smoking.

How to make hash

Making hash on your own, with even the most rudimentary of tools is easy and straightforward. Here are three very simple methods for making your own batch.

How to make dry sift hash

To make hash with kief, simply work the dry buds or trim back and forth gently over micron screens, letting all of the kief fall to a tray below. Typically the smaller the gauge, the finer the kief you’ll harvest. The dry sift method is very versatile because once the kief has collected below, you can either press it into hash, or just put it aside and have a stash of kief that you can sprinkle on bowls or into joints whenever the urge strikes.

How to make bubble hash

What is bubble hash you ask? Also known as water hash, bubble hash uses ice, water, and filter bags to pull the trichomes from the cannabis so it can be formed into hash.

To make bubble hash you’ll need cannabis flower and/or trim, filter bags, two buckets, cold water, and parchment paper. A lot of recipes call for using your washing machine in concert with the filter bags, ice, and water, but we’re going to focus on how to make it by hand.

After the hash is dry, you can press it into blocks. The different levels of hash will be of different grades, and you can either separate them or press them together.

You can also reuse the plant material from the first round and repeat the process from the beginning to produce more bubble hash.

Make your own hash rosin

Rosin is a very popular and potent cannabis concentrate and all it requires is some cannabis flower, kief and/or cannabis trim, parchment paper, and a hair straightener.

Use your hands to make hash

Used to make charas, this method is done by just using the tools that you always have on hand, literally.

All you need is some freshly picked cannabis flower and your own two hands. Make sure to use flowers that aren’t fully mature and which aren’t dry.

Make sure to have some good, strong soap on hand, you’re going to need it to clean up afterwards.

Use cannabis trim to make hash

Cannabis trim refers to the sugar leaves and fan leaves that have trichomes on their surface and are often discarded during the trimming process. This is something of a shame, because they can actually be used to harvest kief for hash.

Making hash with weed trim is pretty easy, and quite similar to how you would make dry sift hash or rosin.

You can also fill a bubble bag with trim just like you would with cannabis flower and make bubble hash, though it will require a significant amount of trim.

In addition, you can take your trim and make rosin the same way you would with cannabis flower, just make sure to place it into a rosin bag first in order to filter it.

A version of this article was first published on November 1, 2020.