There’s nothing like starting your day with a bowl of Fruity Pebbles, and we aren’t talking about the cereal. The Fruity Pebbles strain is a potent, yet evenly-balanced hybrid known for its rainbow colors and fruity flavors and aroma (hence the name). Fruity pebbles samples are routinely measured at over 20% THC, and the strain can produce a deeply relaxing and euphoric high, with a strong body effect — so it might be better if you’re the “eat cereal for dinner” type.

Is breakfast the most important meal of the day? That’s up for discussion, but Fruity Pebbles is a great option when you’re looking for a fruity, can’t-stop-smiling strain that tastes — and hits — oh so sweet. 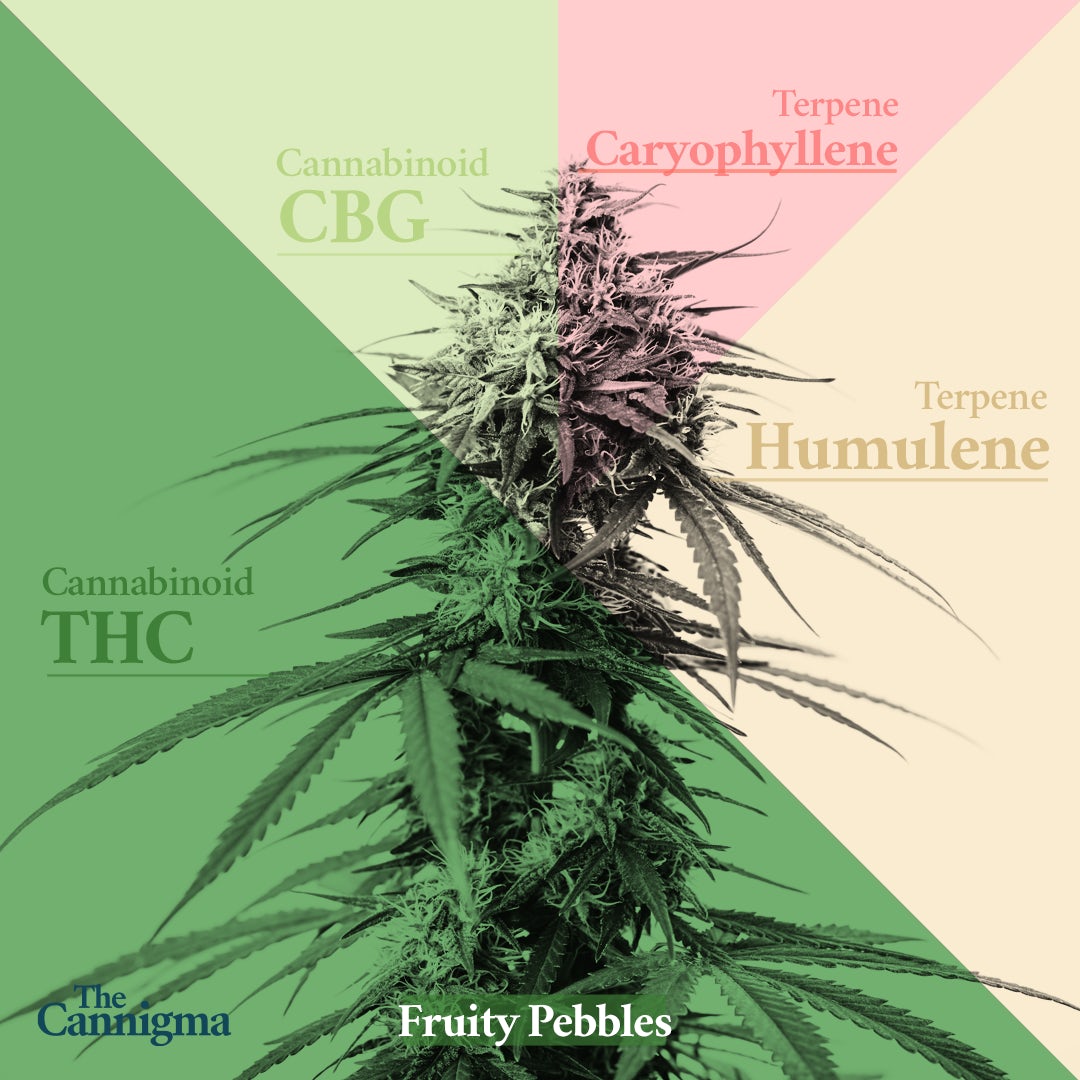 Also known as Fruity Pebbles OG (or “FPOG”), this strain first hit the scene around 2006, and its creation is most often credited to the growers at the Californcia-based Alien Genetics, who reportedly created the strain as a special limited time offer. Truth is, nailing down the exact parentage or origin story of Fruity Pebbles is quite difficult, mainly because so many growers have bred their own Fruity Pebbles chemovars over the past decade and some change.

The star-studded parentage of the strain is most commonly-described as Granddaddy Purple mixed with Green Ribbon and Tahoe Alien. Granddaddy Purple could be responsible for the color palette of this strain, with Fruity Pebbles often replete with purple, green, and pink hues, as well as bright orange hairs. These are nugs you might want to display, if they last that long.

In a sense, the colorful appearance and fruity aroma and flavor of Fruity Pebbles weed may make it seem like something of a novelty strain and not your everyday go-to herb of choice. In fact, Fruity Pebbles is a potent, reliable strain that produces a strongly satisfying — and just plain strong — high, and is also known for being extra smooth to smoke.

Cannabinoids and terpenes in Fruity Pebbles

The chemical profile you see below is an average of laboratory tests for products called “Fruity Pebbles” — so it’s just an estimate of what you might find when you buy Fruity Pebbles.

Terpinolene 0.3%
* The numbers in the tables are averages of data from multiple resources
** Terpenes are of pharmacologic interest at concentrations above 0.05%

How Fruity Pebbles affects you

Based on user reports,Fruity Pebbles tends to produce happiness, relaxation and euphoria, and could cause dry mouth, dry eyes, and dizziness. But really, marijuana affects people in different ways. The two main factors are your own biology (your endocannabinoid system, metabolism, age, weight, etc). and the product you choose (the cannabinoid profile, the terpenes breakdown and the delivery method).

That being said, the above chemical profile is very diverse and suggests fruity pebbles could treat conditions and symptoms such as pain, arthritis, Parkinsons disease, IBD (crohn’s disease and ulcerative colitis), obesity and acne. Also, Fruity Pebbles flavors correlate with its name — the limonene, BCP, and terpinolene in it suggest citrusy, spicy and floral flavors.

Fruity Pebbles can be a difficult strain to grow in part because the seeds can be hard to come by — and expensive if you happen to get your hands on them.

Fruity Pebbles can be grown indoors or outdoors, with generous yields at harvest time both indoors and under the open sky. It can grow tall, around six feet or even higher, meaning that growers will need to trim the fan leaves in order to allow the lower branches to get light. The tall height and pungent aroma of this strain means it’s not the most discrete strain if you are growing outdoors.

Fruity Pebbles prefers a warm and dry climate, and it’s known for having a high resistance to plant diseases.

With its fruity flavor and aroma, smoking Fruity Pebbles is an immersive, delightful experience even without taking the high THC percentage into consideration. In a sense that makes it similar to a strain like Zkittlez, which has become popular as much for its candy-esque flavor as the high it produces. Wedding Cake, one of today’s most popular strains, is another indica-dominant hybrid that produces euphoric effects with a similar terpene profile to Fruity Pebbles. The same goes for Strawberry Banana, an indica-dominant hybrid known for a giggley, euphoric high, with a terpene profile similar to that of Fruity Pebbles.

As mentioned, Fruity Pebbles bears a resemblance to its parent strains in terms of how it looks, feels, smells, and tastes, and could be a great strain for people who love the taste, aroma, and sensation of smoking a strain as much as the high itself.