What happens when you bring together a young farm boy destined for greatness and one of the most powerful jedis of the cannabis world? You get a powerful indica-dominant chemovar that produces a relaxing high that will have you coasting somewhere far, far away from the Dark Side. Skywalker OG (also known as “Skywalker OG Kush”) is a high-THC strain with pungent nugs dusted in frosty, Hoth-esque trichomes that is great for couch-locking and watching the entire Star Wars trilogy until you crash between the cushions. 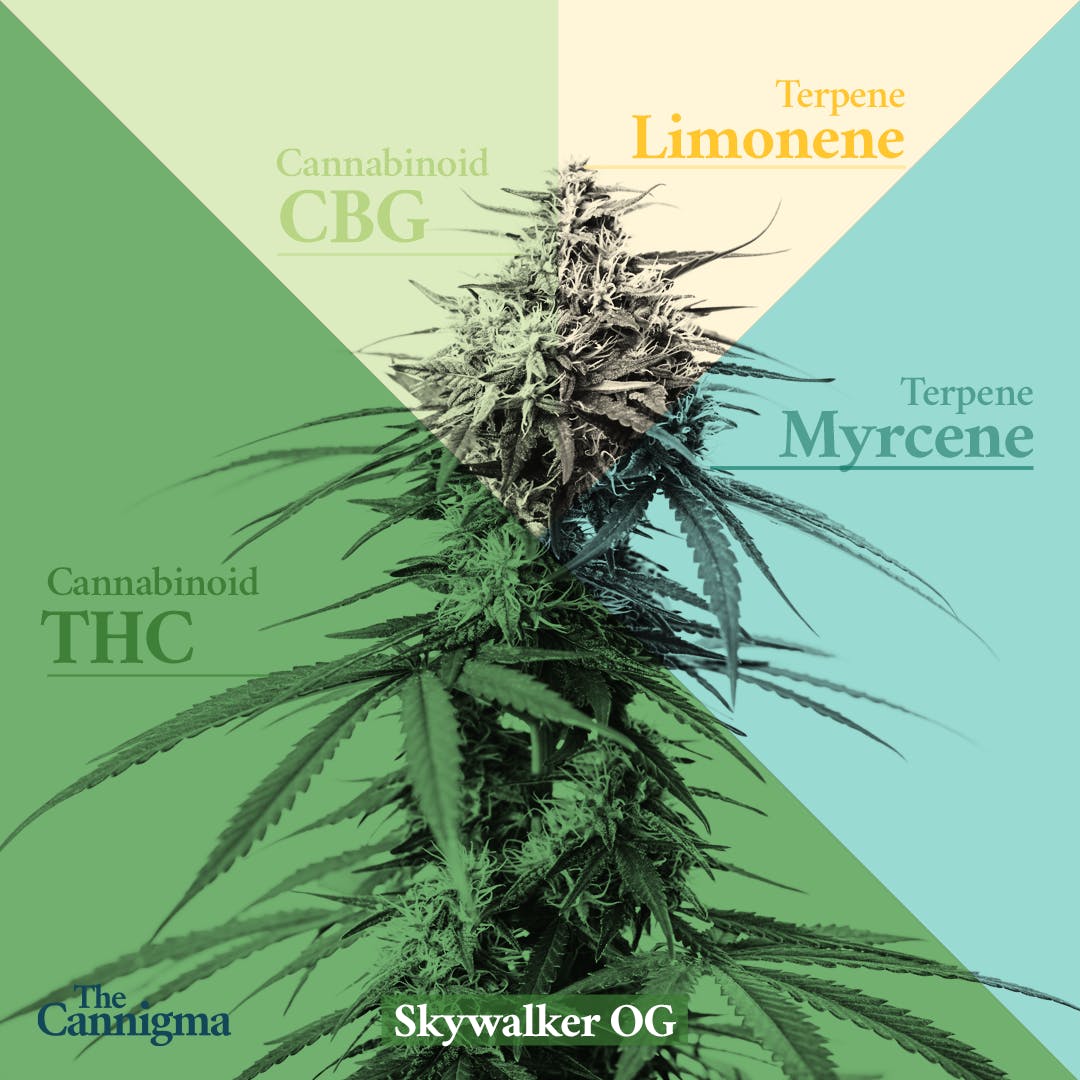 According to Lift & Co, the story of Skywalker OG begins in the far off galaxy of “Amsterdam.” The Skywalker strain was originally bred by Amsterdam seed company Dutch Passion, which crossed a Mazar male with a Blueberry female, creating a fruity, tranquil indica that quickly became a hit.

But why stop there? Skywalker was later crossed with OG Kush, creating Skywalker Kush, which the team at DNA Genetics has released in seed form. The breeders refer to the chemovar as “a good yielding OG Kush variety” that tastes like OG Kush “with big dense flowers with lots of resin.”

Other origin stories abound, including that Skywalker OG is a phenotype of OG Kush that was selected for its sativa-dominant traits, according to Medical Jane. Another tidbit emerges from Wayofleaf.com, that “the ‘Skywalker’ part of the name has nothing to do with tits ancestry” and that “during the initial spread of its popularity, the leading grower was called Luke; this was all it took for it to become known as Skywalker.”

The strain has a potent aroma of diesel and spice and produces a strong body high and a legit stoney, euphoric feeling that will have your head in the clouds even if you never get off the couch.

The strain is predominantly indica — as much as 85% according to several sources — and produces that tranquil feeling that people associate with indicas, even if scientifically speaking, it’s the chemical profile of the strain that determines how it makes you feel.

Cannabinoids and terpenes in Skywalker OG

The chemical profile you see below is an average of laboratory tests for products called “Skywalker OG”— so it’s just an estimate of what you might find when you buy Skywalker OG.

Pinene 0.1%
* The numbers in the tables are averages of data from multiple resources
** Terpenes are of pharmacologic interest at concentrations above 0.05%

How Skywalker OG affects you

Based on user reports, Skywalker OG tends to produce relaxation, sleepiness and euphoria, and could cause dry mouth, dry eyes, and dizziness. But really, marijuana affects people in different ways. The two main factors are your own biology (your endocannabinoid system, metabolism, age, weight, etc). and the product you choose (the cannabinoid profile, the terpenes breakdown and the delivery method).

According to DNA Genetics, Skywalker OG flowering time is 9 weeks and the strain “gives you the chance to have multiple high yielding crops a year.” The strain is considered of medium difficulty to grow, partly because it requires a lot of pruning and “topping” to encourage growth.

The strain grows high and can be cultivated indoors or outside. It prefers a dry climate with temperatures between about 68 and 80 degrees Fahrenheit.

When it’s all said and done, Skywalker OG should reward you with a high yield of trichome-heavy herb.