This award-winning CBD strain can pack CBD levels of around 20% with barely any THC, helping make it a highly-popular strain for medicinal marijuana users in recent years. An indica-dominant hybrid strain, it was crafted from two high-CBD chemovars, and along with its earthy, sweet flavor, it is known for producing a relaxing effect without the psychotropic high of THC. 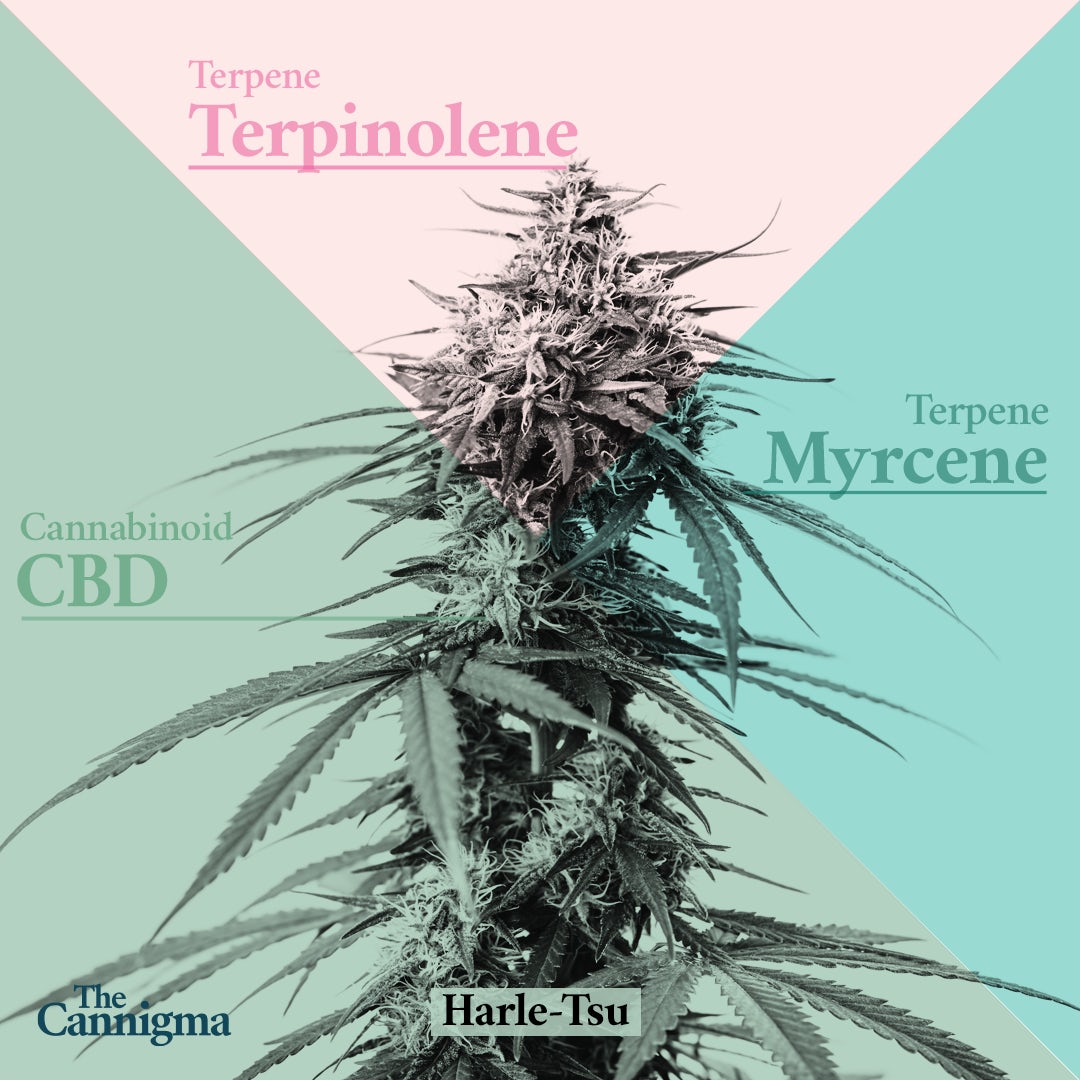 Harle-Tsu, aka “Harlequin Tsunami,” has a serious parentage, coming from two of the most popular high CBD strains. The breeders crossed a male from the high CBD, low THC strain Harlequin (in order to reduce the THC amount even further) with Sour Tsunami, a CBD strain with very little THC at all.  First bred by the Southern Humboldt Seed Collective, Harle-Tsu has one of the highest levels of CBD of any medicinal strain, with virtually no THC.

The Southern Humboldt Seed Collective refers to Harle-Tsu as “our best CBD strain currently available,” and states that it can have CBD levels of up to 20%. It also won the Highest CBD award at the Emerald Cup in 2012 and 2013.

This is a strain that is praised for relaxation, as well as for its piney, earth aroma and sweet flavor. The buds aren’t as colorful as its parent strain Harlequin, which got its name because some felt it looked like a clown’s pajamas.

Cannabinoids and terpenes in Harle-Tsu

The distinction between different types of cannabis products was traditionally made by their indica/sativa properties, or by their names. But both methods are problematic. Rather than describing the botanical origins of the plant, as the classifications indicate, indica and sativa properties are totally subjective. Rather than a basis in scientific or empirical data, these distinctions largely come down to someone trying a strain and deciding it causes effects such as a sedative body high, or a cerebral uplifting feeling.

Strain names have their own pitfalls and can be misleading in terms of what to expect from a product. You can have a very sedative experience with most Bubba Kush you try, and then once in a while you’ll get a Bubba Kush from a grower you never tested, and it could light you up like a firecracker. This can be very frustrating, especially if you’re using cannabis to treat a medical condition.

This is because the chemical profile of the product you choose is actually what determines your weed experience — especially the cannabinoid and terpene content. And though science has not discovered yet how exactly the hundreds of chemicals in cannabis interact with each other, we do have some notion of what these compounds can do individually.

The following is the average chemical profile of Harle-Tsu, derived from multiple test results from cannabis products named Harle-Tsu, carried out by 3rd party laboratories..

Of course, we’re not presuming to create a standard definition for the Harle-Tsu chemical profile, but these numbers can give you an estimation of what to expect when looking for this chemovar. Combined with knowledge about the effects of different cannabinoids and terpenes, this could help you better predict your experience. In any case you should look for a certificate of analysis before purchasing, and look at the dominant compounds — because at the end of the day that’s the product you’re going to  consume, not the above-mentioned average.

According to the lab reports we found, Harle-Tsu is fairly high in CBD with an average of 6.3% (though the highest test we found was 15%). With low amounts of THC, and decent amounts of CBG and CBDV (0.3% and 0.4%). The dominant terpenes were myrcene and terpinolene (both averaging at 0.3%). See if you can identify the herbal and floral aroma associated with these when you give it a sniff.

Ocimene 0.06%
* The numbers in the tables are averages of data from multiple resources
** Terpenes are of pharmacologic interest at concentrations above 0.05%

Based on the above chemical profile, Harle-Tsu can potentially be particularly helpful for inflammation, arthritis, dementia, anxiety and epilepsy. But as mentioned, your best bet is to consider the cannabinoids and terpenes that might treat your particular condition, and try to find a strain high in these.

The above chemical profile isn’t likely to cause any psychotropic effects. That being said, some versions of Harle-Tsu could be higher in THC, and depending on the terpenes profile could be either uplifting and focusing (likely in the case of a high-pinene variety) or sedating and sleepy (in the case of high myrcene content).

There is sparse information about growing Harle-Tsu available online, but it is described as a plant that can be grown both indoors and outdoors, with a slightly better yield if grown in sunlight.

The plant is known for producing large, sticky grape-shaped buds and for a flowering period that could come as quickly as 8 to 9 weeks, with yields of around 16 ounces per plant in outdoor grows, and 8 to 12 ounces per 3ft by 3ft in indoor grows. And while some sites state that it can reportedly grow as high as 72 inches, according to the Southern Humboldt Seed Collective “for a CBD variety it grows like an indica, short, stout and sweet.”
Grow guides advise keeping the temperature no higher than 80 degrees Fahrenheit with humidity levels below 50%.

This is likely a familiar strain for cannabis patients who are used to high-CBD, low-THC strains like ACDC or Charlotte’s Web, and can be effective in treating pain, inflammation, anxiety, and other health conditions. Harle-Tsu is known for producing a more relaxing effect than other high CBD strains, which often produce an invigorating effect.