One of the most famous strains bred purely for its high CBD content, Sour Tsunami is a sativa-dominant hybrid known for washing away pain and inflammation, and creating an uplifting, focused sensation. Used mainly as a medical cannabis strain, Sour Tsunami has especially high levels of CBD as well as some THC- but not enough to leave you feeling waterlogged. 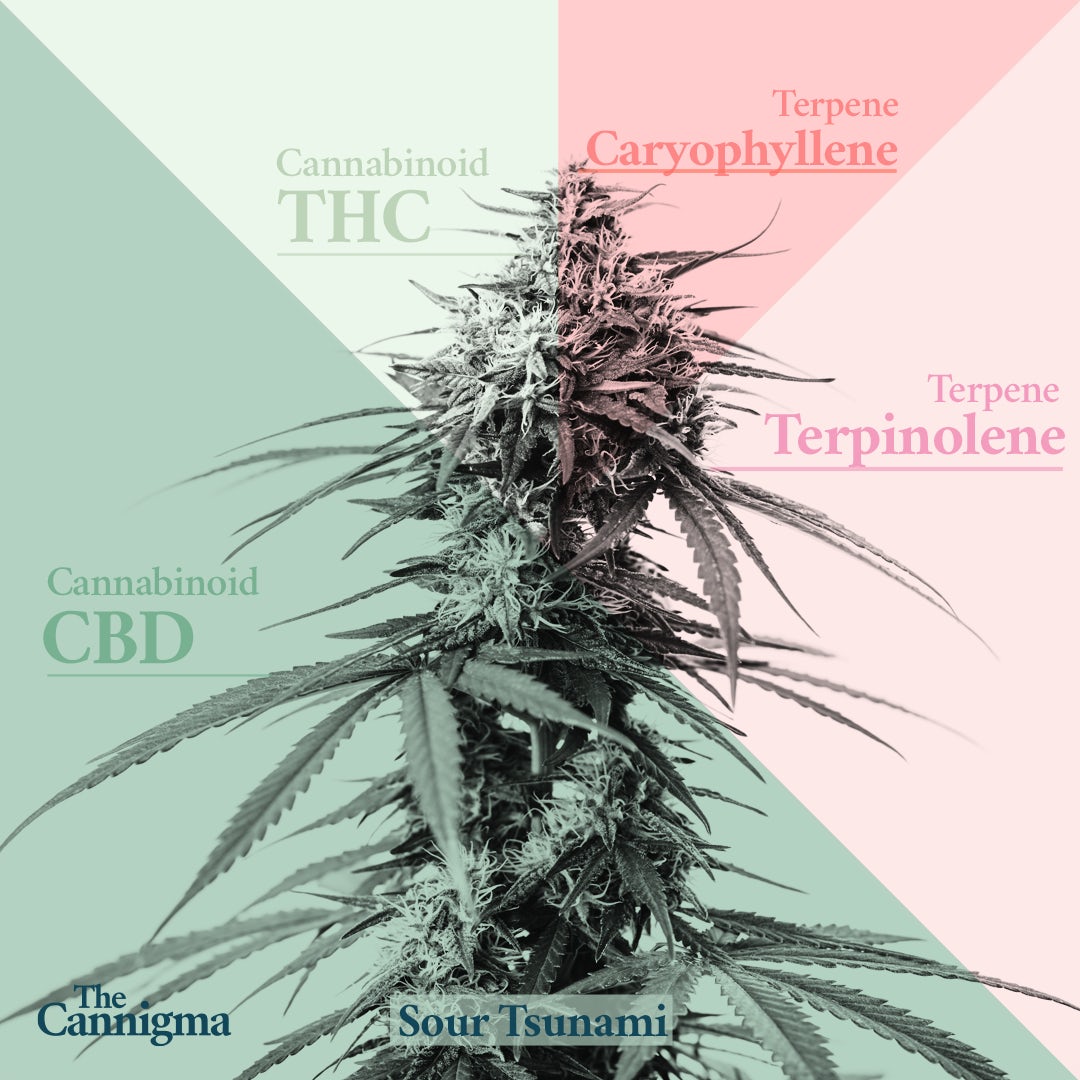 Sour Tsunami was a labor of love of the late, legendary marijuana cultivator Lawrence Ringo, who spent at least four years crossing male NYC Diesel seeds with Sour Diesel female clones, and eventually, a mysterious, creamy sativa-dominant hybrid called Ferrari. Ringo said of Ferrari “it was protected by the rednecks —the good old boys who used to be loggers and now they’re pot growers….They weren’t going to give it to us but we got it.”

Eventually, “Sour Tsunami” was born, its name paying homage to its Sour Diesel heritage and the powerful taste it leaves with users.

According to Ringo, when he first took the strain to get tested it came back with 11.3% CBD, and a high CBD chemovar (chemical variation) mainstay was born. Ringo first told that story in an article published in late 2008 in the Anderson Valley Advertiser, just as the strain was making its debut. He said that for years he had worked to develop a strain that would help ease his back pain without fogging up his head, and that “there are certain highs that you can operate on and some that you can’t. You smoke three hits and you’re passed out. I don’t like that.”

Ringo described the Ferrari strain he used as having a creamy taste that left him craving more, while both NYC Diesel and Sour Diesel are known for their sour flavor and pungent, almost gas like aroma (hence the names). Bred together in Sour Tsunami, the end effect is a sweet and citrus and pine-flavored strain with the sort of strong diesel smell one would expect from its parents.

Like its diesel parents, this strain is known for producing an invigorating, even lively sensation. You shouldn’t expect to become a long-distance swimmer two puffs in, but you also shouldn’t be afraid to try this strain in the daytime hours.

Cannabinoids and terpenes in Sour Tsunami

The traditional ways to choose a cannabis product are either by its sativa or indica “properties,” or by the strain name. The main problem with the sativa and indica method is that these terms are botanical names, and there’s currently no way to predict how a plant based product will affect you by looking at its shape. Strain names, on the other hand, are mainly problematic because there is no standard nor trademark for the chemical properties of Sour Tsunami (or any other strain for that matter).

The fact is that it’s the chemical profile of a given variety that has the biggest impact on how it will affect you, as well as factors like your own biology, age, and delivery method. Educating yourself about the properties of the common cannabinoids and terpenes, and then looking at their prevalence in the product you’re considering is the best way to make an informed choice. This still won’t give you an exact prediction of how it will affect you, but it could help you narrow down your choice between thousands of chemovars.

Below is a breakdown of the average numbers we found in test results from 3rd party laboratories for Sour Tsunami. They show Sour Tsunami to be a high-CBD, low-THC chemovar, dominant in the terpenes myrcene, terpinolene and BCP.

Humulene 0.08%
* The numbers in the tables are averages of data from multiple resources
** Terpenes are of pharmacologic interest at concentrations above 0.05%

How Sour Tsunami affects you

Depending on the chemical profile of the Sour Tsunami you get your hands on, you can expect different effects. But if it resembles the above numbers, it could be particularly beneficial for medical conditions such as multiple sclerosis, arthritis, pain and inflammation.

As a 11:1 CBD-THC this chemovar seems less interesting for most recreational users, as it’s likely to produce little to no psychotropic effects. That being said, the sedating terpene myrcene is dominant in Sour Tsunami, so a mild intoxication wouldn’t be unheard of for lightweight consumers.

You don’t need to be a legendary cannabis cultivator to grow Sour Tsunami, but it’s not an ideal strain for novice growers. It grows a number of different phenotypes and according to I Love Growing Marijuana, you may have only a 25% chance of growing a harvest with high CBD flower.

Sour Tsunami can be grown indoors or outdoors and produces dense, dark green buds with purple-tinged, dark green leaves. It likes a warm climate and should flower in about 8-9 weeks with a moderately sized yield at harvest.

Sour Tsunami is most closely-related to its sativa-dominant parent strains NYC Diesel and Sour Diesel, in flavor, aroma, and sensation — though it contains far less THC then either strain, and multitudes more CBD.

It’s very closely-related to Harle-Tsu, a high CBD strain it was used to create, and in general bears strong similarities to high CBD, sativa-dominant strains like ACDC. That said, unlike strains like ACDC, it can actually have a notable amount of THC (1%-10%), though far lower than what most chemovars provide today.