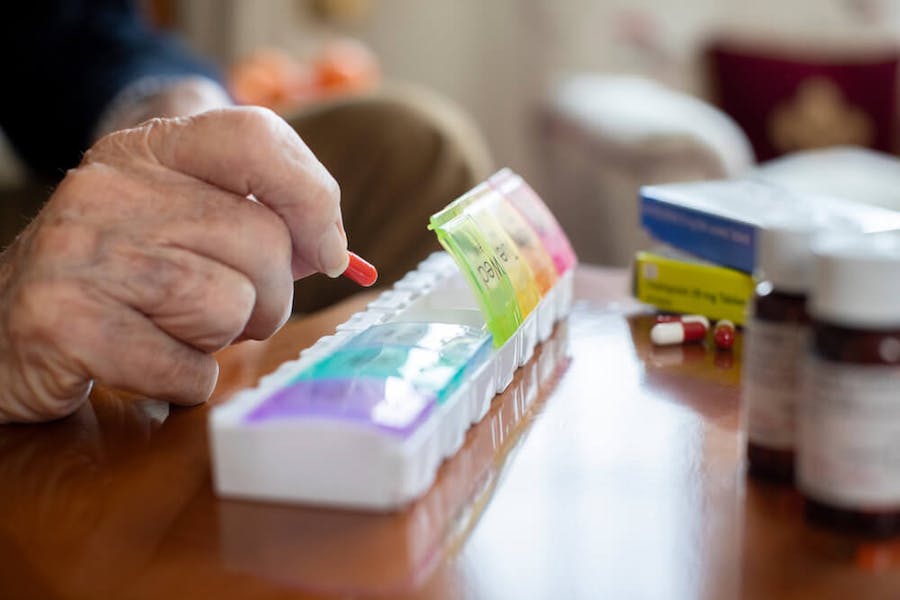 The active ingredients in cannabis can interacts with a number of prescription medications. (Shutterstock)

There are over 140 different kinds of cannabinoids out there, and out of the few, we’ve begun to study we’ve already discovered a multitude of health benefits and treatment targets. Whether it’s helping cancer patients, or curbing inflammation and beyond, the therapeutic potential of this plant offers many medical patients a chance at a better, more pain-free life.

Despite its many medical benefits, patients should proceed with caution as cannabis does have side effects, and it can also interact with other drugs. While more conclusive research is ultimately needed before we can determine the full extent of the plant’s drug interactions, researchers have already identified several common ones.

These findings are presented below to help you make better choices regarding your healthcare options, but you should always consult with a doctor before initiating treatment. Elderly patients and those with chronic diseases such as kidney, heart, and liver conditions should use extreme caution.

Much of the current research regarding negative adverse reactions of medical marijuana is inconclusive. A 2016 research paper summed up the known adverse effects of cannabis neatly:

One of the more serious side effects to note with THC is its potential link to psychosis. Research notes that the link to psychosis is especially potent among people with a “preexisting genetic vulnerability and exacerbates the course of illness in patients with schizophrenia.” THC can also increase feelings of paranoia and reduce working memory capacity. Patients who have a history of psychosis are strongly discouraged from taking any potentially psychotropic substances.

Researchers have noted that cannabis use in adolescence (prior to age 21) can result in impaired neural connectivity (fewer fibers) in several brain regions. Image studies conducted on users also reveal decreased volume in the hippocampus, the region of the brain responsible for the formation of new memories, as well as decreased activity in prefrontal regions. This decreased frontal activity can negatively affect areas related to executive function including working memory and the ability to process habits and routines.

Researchers estimate that less than 10% of cannabis users meet the criteria for dependence according to DSM criteria (the Diagnostic and Statistical Manual of Mental Disorders). This figure increases to “about 1 in 6 among those who start using marijuana as teenagers and to 25 to 50% among those who smoke marijuana daily.”

A rare side effect of chronic use is cannabinoid hyperemesis syndrome (CHS), a condition that causes severe and repeated instances of vomiting.

Many CHS patients report relieving their symptoms through frequent hot baths or use of topical capsaicin products.

The most commonly reported side effects associated with cannabis use include bloodshot eyes, dry mouth, paranoia, changes in appetite or energy levels, distorted thinking and a loss of motor skills.

CBD is generally well-tolerated at doses of up to 1,500 mg. The most commonly reported side effects associated with CBD use include changes in weight/appetite, nausea, fatigue and diarrhea.

The most significant drug interactions involving cannabis are those pertaining to the P450 (CYP) family of enzymes, which are responsible for metabolizing most drugs. When inhaled THC speeds up the CYP enzyme’s activity, resulting in an accelerated break down of drugs. This breakdown results in lower overall levels of the drug within the body.

Drugs that are susceptible to such interactions include medications such as “clozapine, duloxetine, naproxen, cyclobenzaprine, olanzapine, haloperidol, and chlorpromazine.”

This suggests that plant-derived cannabinoids are moderately effective at reversing multidrug resistance and may help the body better retain chemotherapeutic drugs.

Surprise, surprise: alcohol can exacerbate the effects of cannabis. Researchers discovered that low doses of alcohol—approximately 0.065% peak breath alcohol concentration—significantly increased blood levels of THC. This increase in THC can cause impairments in cognition and judgment as well as other side effects like dizziness and drowsiness, so proceed with caution when combining the two.

Not much is known about potential drug interactions with SSRIs (selective serotonin reuptake inhibitors), a class of drugs commonly used as antidepressants. The United States Department of Health issued a special warning in a presentation regarding interactions with Prozac, stating, “Taking marijuana with fluoxetine (Prozac) might cause you to feel irritated, nervous, jittery, and excited. Doctors call this hypomania.”

As so little information is currently available, SSRI patients interested in medical cannabis should consult their doctor before use.

Another class of drugs to note are tricyclic antidepressants (TCAs). The United Kingdom’s National Health Service has noted that “Cannabis or marijuana can interact with tricyclic antidepressants (TCAs), such as amitriptyline, imipramine, and dothiepin.” The reasoning behind this is the combination of the two can result in high blood pressure (hypertension) or a sped-up heartbeat (tachycardia).” Other potential side effects can include mood swings, restlessness, confusion, and hallucinations.

One of the most promising aspects of cannabis is its therapeutic potential for treating opiate addiction, with studies revealing patients who are given access to medical marijuana decrease their use of opioids by 40–60%.

Curiously enough, vaporized marijuana has been shown to increase the analgesic (painkilling) aspects of opioids without affecting plasma opioid levels.

CNS depressants are a class of drugs that reduce stimulation by reducing neurotransmission levels within the central nervous system. The result is a decrease in brain activity that promotes muscle relaxation and a feeling of calm. These medications include clonazepam (Klonopin), lorazepam (Ativan) and zolpidem (Ambien), among others.

The United States Department of Health has noted that cannabis enhances CNS depressant effects when combined with alcohol, barbiturates or benzodiazepines. Taking medical marijuana can amplify the sleepy or drowsy effect of these drugs.

Patients using blood thinners like Warfarin (also known as Coumadin) should avoid using cannabis. The United States Department of Health warns that, “…smoking marijuana while taking warfarin (Coumadin) might increase the chances of bruising and bleeding.”

Theophylline is a bronchodilator (a drug that helps increase airflow to the lungs). A 2014 study noted that cannabis can decrease theophylline levels when smoked.

CBD inhibits many of the CYP enzymes responsible for breaking down drugs. As a result, co-current administration of CBD with select drugs can result in increased levels of those drugs in the body. Potential drugs include “SSRIs, tricyclic antidepressants, antipsychotics, beta-blockers and opioids (including codeine and oxycodone).” CBD may also increase concentrations of: “macrolides, calcium channel blockers, benzodiazepines, cyclosporine, sildenafil (and other PDE5 inhibitors), antihistamines, haloperidol, antiretrovirals, and some statins (atorvastatin and simvastatin, but not pravastatin or rosuvastatin).”

Some drugs may inhibit the enzyme that metabolizes CBD, resulting in an accumulation of excess CBD in the body. A few of these drugs include ketoconazole, itraconazole, ritonavir, and clarithromycin. Other drugs act in the opposite manner, speeding up the metabolism of CBD by the enzyme and resulting in reduced CBD bioavailability. Some of these drugs include phenobarbital, rifampicin, carbamazepine, and phenytoin.

CBD’s drug interactions can vary. They depend on whether or not the drug increases or decreases activity of CYP enzymes.

While we know CBD can potentially help mediate MDR in cancer the full extent of CBD’s drug interactions is not currently fully known. However, research indicates that some forms of CBD can have potential drug interactions with select enzymes responsible for drug transportation. As such co-administration of CBD with the following drugs is not recommended.

CBD is a potent inhibitor of CYP2D6. As this drug is responsible for metabolizing many different kinds of antidepressants CBD may increase serum concentrations of SSRIs, tricyclic antidepressants and benzodiazepines.

CBD is often used to help treat seizures/epileptic patients. However, it can alter the number of other anticonvulsants taken if taken concurrently. Administering CBD in conjunction with Clobazam, a sedative used to treat seizures, results in an increased level of Clobazam in children with epilepsy due to potent inhibition of the CYP2C19 enzyme⁵.

Researchers also noted that abnormal liver function test results were found in participants who took the anticonvulsant Valproate in conjunction with CBD. Extreme care should be undertaken when combining CBD with anticonvulsants or other epileptic drugs, with researchers advising compulsory monitoring of drug levels to observe patients’ liver functions.

Patients using blood thinners like Warfarin (also known as Coumadin) should exercise caution when using cannabis. Researchers at Harvard Medical School warn that CBD can increase levels of blood thinners like Warfarin (Coumadin) thanks to Cytochrome P450 inhibition. This can be harmful as Warfarin thins the blood and excess levels can put patients at a higher risk for bleeding.

Cannabis has a wide range of therapeutic benefits. However, its concurrent use with other drugs can result in a variety of other drug interactions. Given the fact that THC and CBD each affect the body in their own unique ways, patients should exercise great care when combining marijuana and other medications. Consult your doctor before initiating medical marijuana for your condition.  Most often, either no change or a simple change in dosage is warranted.

Janelle is a journalist, artist, and cannabidiol (CBD) expert. Her works have appeared in publications including Thrillist, Rolling Stone, BBC, and...