Harlequin is a sativa-dominant, high-CBD chemovar crafted from old school landrace strains. It is a favorite of medical cannabis patients looking to relieve pain or anxiety without getting too high, though that doesn’t mean it won’t give you a “warm, glowy feeling.”

The strain won accolades both at the 2014 Cannabis Cup and at the 2019 Highlife Cup in the Netherlands for CBD flowers, among other cannabis awards, and it has also won the acclaim of users for its sweet, almost fruity taste. 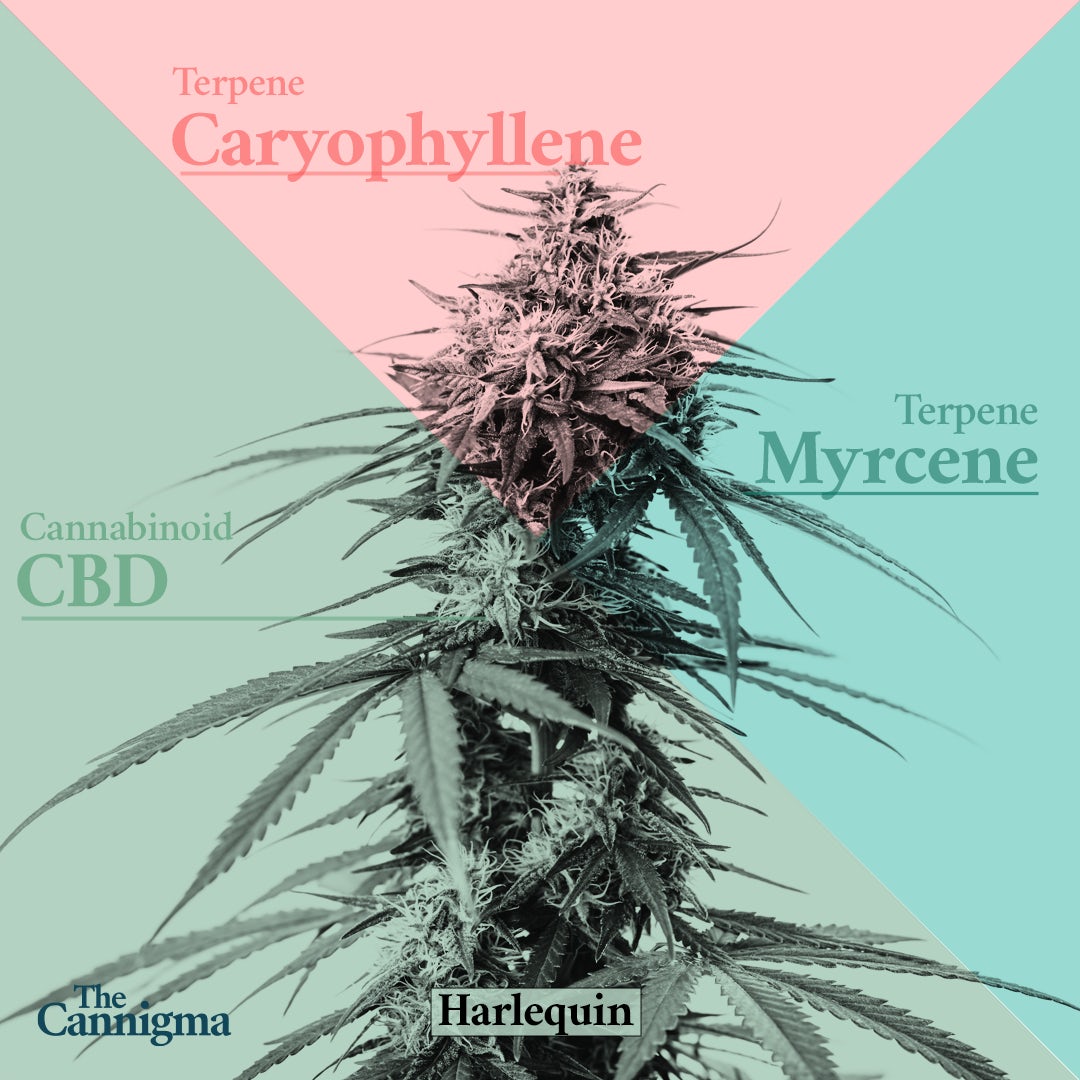 The creation of Harlequin is credited to breeder Mr. Green of the House of David Collective, who reportedly crossed three landrace sativa strains — an early 70s Colombian Gold male, a Thai strain, and a Swiss land race — with a Nepalese indica strain.

Mr. Green didn’t set out to create a medicinal strain — he was breeding Harlequin in order to make a hash-producing strain. But life can throw you some curveballs, and this is definitely the case with growing. When Mr. Green noticed the strain wasn’t getting his friends all that high, he decided to get it tested. The chemovar tested at around 7% CBD and 7% THC, though it can also reach much higher levels of both. This has made it a highly-sought after medicinal cannabis strain, and it can at times be difficult to find at dispensaries.

The strain is typically about 75% sativa and 25% indica, and produces multi-colored flowers in violent, green, red, and yellow, reminiscent of a clown or medieval court jester — hence the name. The strain produces a lot of crystals and the multi-colored buds grow large and prominent. And while it is a low-THC strain, its fruity scent and hashy, sweet and natural flavor can be enchanting in its own way.

Cannabinoids and terpenes in Harlequin

In the past few decades, cannabis consumers have been distinguishing between varieties by their names and their Indica vs sativa properties (i.e. sedative vs uplifting, body high vs head high). But in recent years the scientific literature has shed light on the importance of the chemical profile of a cannabis cultivar, and on the problems of cannabis “strain” names.

The fact is, it’s the types and concentrations of molecules in your product that really determine your cannabis experience —particularly cannabinoids and terpenes. The main problem with “strain” names, is that there’s no standard definition for the chemical profile of the thousands of cannabis cultivars out there. So anyone can grow anything and call it Harlequin, regardless of the levels of THC, CBD or any other cannabinoid or terpene.

The Cannigma solution to this riddle is to gather test results from a variety of 3rd party laboratories, for cannabis products bearing the name Harlequin. And though the following numbers are by no means the standard definition of Harlequin’s chemical profile, they can give you an understanding of what to expect when looking for this chemovar in your local dispensary.

In any case, when looking for the right cannabis products for you, the best practice is always to make informed decisions. So start by identifying your desired effects (either medical or recreational), and then get educated about the different terpenes and cannabinoids and their properties. From that point, it’s all about trial and error. Alternatively, if you don’t have access to the CoA, you can consult with your budtender about other consumer’s experience with a specific product, but keep in mind that these experiences are very subjective.

According to the lab reports we found, Harlequin is a fairly balanced THC:CBD cultivar, with an average of 9% THC and 6.4% CBD. The most dominant terpene is myrcene, followed by BCP, pinene, and humulene in lower amounts. So you can expect a mixture of earthy, woody and spicy aromas and tastes with this one.

How Harlequin affects you

Depending on the dominant compounds in the Harlequin you get, you can expect different effects. If it’s close to the averages above, this chemovar could potentially help with conditions such as pain, MS, arthritis, inflammation, dementia, asthma, Crohn’s disease, ulcerative colitis, anxiety, Parkinson’s disease, addiction, and obesity.

The chemical profile is also responsible for the type of high you’ll experience. Unlike medicinal effects, recreational ones are less researched and as a consequence, difficult to predict. Most of what we know about how terpenes can affect us is based on preliminary research. That being said, high levels of myrcene and BCP are associated with strong sedation, while pinene is believed to sharpen focus and combat memory loss associated with THC. Humulene hasn’t been researched much in that regard.

Harlequin is a moderately easy-to-grow strain that flowers quickly should be ready to harvest in as little as 8 weeks, though 9 to 10 weeks is more common.

It can produce a high yield of frosty, large buds that are covered in beautiful crystals, though rather moderate yields are common as well. If grown outside, it should be in an area where the temperature remains between 70 and 85 degrees Fahrenheit, according to WikiLeaf. In addition to the high yield, the plant can also grow quite tall, well over 6 feet in some cases.

Because it produces large, dense buds, it may require more care, including support to hold the flowers up towards the end of the grow. In addition, because CBD levels degrade more rapidly than THC, it should be harvested early so the quality does not decline. Growers should also take care to ensure a steady airflow and regulate the humidity.

Harlequin is closely-related to its parent strains, a number of landrace varieties from Thailand, Switzerland, Colombia, and Nepal. Other than the Nepalese indica, the parent strains are all sativas, so the strain bears more in common with sativa-dominant high CBD strains.

With its high-CBD low-THC percentage, it is most similar to high-CBD medicinal strains like Cannatonic, though it is more heavily sativa-dominant. And with THC levels that can often reach well over 10%, it is far stronger than high CBD strains like ACDC which are closer to industrial hemp.