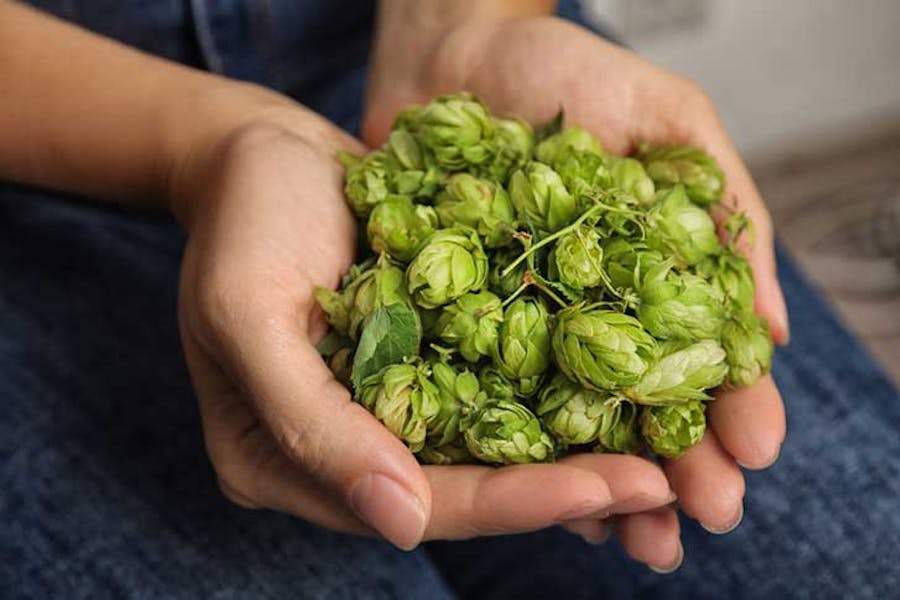 Have you ever smelled a cannabis chemovar that reminds you of hops? If so you’ve likely encountered the terpene humulene (AKA alpha-humulene). It is a terpene found in many plants including hops and cannabis plants. A terpene is one of several aromatic molecules that give plants their unique effects.

Terpenes are found in the resinous glands of cannabis plants (trichomes) and contribute to a chemovar’s distinct properties. Alpha-Humulene (sometimes known as alpha-caryophyllene) is closely structurally related to another common terpene, beta-caryophyllene, but the similarity in their names is actually a relic of historical naming and unrelated to their chemical structure.

The scent is characterized as earthy, spicy, herbal, and, of course, is reminiscent of that peppery hops scent. Humulene can be found in high concentrations in hops essential oils as well. Other naturally rich sources include cloves, basil, sage, spearmint, black pepper, balsam fir trees, ginseng, and ginger.

Humulene also has some potential medicinal properties, but it’s important to note that most of the scientific knowledge on the topic is based on preliminary research on isolated humulene. While  this can serve as the basis for further research, there’s no scientific evidence yet for humans specifically, or in humulene-dominant cannabis chemovars.

The effects of humulene

More research is needed, but preliminary studies shows humulene may help with:

Humulene’s clinical applications are still being evaluated. It is critical to note that the properties of humulene are not equal to the properties of cannabis-containing humulene. While high concentrations of humulene alone may have some therapeutic effects, there is no evidence that its inclusion at low levels in cannabis transmits any of those potential effects to smoked or ingested cannabis.

Another keen area of popular interest is Humulene’s purported effects on appetite. Many cite the terpene to be an appetite suppressant that could help with weight loss, though this claim has yet to be empirically tested and reviewed.

Humulene is also thought to act as an antioxidative agent involved in the production of reactive oxygen species (ROS). Imbalances in ROS are  implicated in disease states such as aging and diabetes. It is important to note that smoking or vaping cannabis products likely produce more ROS that the terpene components are able to balance.

One 2003 study analyzing the antitumor activity of fir balsam oil found it to be active against all the solid tumor cell lines tested. Interestingly enough the researchers noted, “all the compounds tested were inactive…except for alpha-Humulene…which thus seems responsible for the cytotoxicity of the oil.”

Terpenes are a defense mechanism produced by plants to deter insects. In Humulene’s case this is especially true as studies show this terpene is an effective insect repellent. A 2015 paper sought out to analyze the efficiency of Commiphora leptophloeos leaf oil against “the yellow fever mosquito,” A. aegypti. The researchers identified α-Humulene as one of the major constituents in the oil. They concluded that its presence in conjunction with other terpenes was, “…responsible, at least in part, for the deterrent effect of the oil.” They added that the deterrent activity of the oil was, “…one of the most potent reported so far, suggesting that it could represent an interesting alternative to synthetic insecticides.”

Humulene (along with its relative, beta-caryophyllene) is one of eight primary terpenes found in cannabis plants. As such it is fairly common in chemovars, though its concentration may vary. Since chemovars can vary in terpene content from grower to grower and even batch to batch, it’s a good idea to check out a flower’s certificate of analysis whenever possible.

One study analyzed 233 samples representing 30 cultivars to identify terpene content. Concentrations of terpenes in each chemovar — including that of Humulene — was used as one of the characteristics that set particular chemovar classes apart. As such one of the major groups was characterized by the presence of β-Caryophyllene-dominant, alcohol-substituted terpenoids. Chemovars in this class typically demonstrated a 1:1 or 2:1 ratio of Limonene to Humulene and included varieties from the Sherbert and Cookies families. Some Cookie chemovars listed were: Animal Cookies, Blue Cookies, Girl Scout Cookies, and Thin Mints.

Cannabis chemovars (AKA strains) are often named by their breeder, but there’s no standard definition or trademark for these names, so it’s difficult to define which ones are high in humulene. That being said, strain names that are often tested with high humulene concentrations include the following:

See all
What are terpenes?
Myrcene
Pinene
β-ocimene
Humulene