It’s a childhood tradition — for a few weeks a year, little girls go door-to-door or post up outside the supermarket selling boxes of tasty cookies that are even better if you’re high. But sometime about a decade ago, breeders in Northern California created a legendary strain that cut out the middle man, and changed the world of elite cannabis strains forever.

Known as GSC or Girl Scout Cookies, this strain is a potent, award-winning favorite popular across the cannabis world. It produces a happy and euphoric cerebral high combined with a relaxing sensation across the body. And unlike its namesake, you can enjoy these cookies year-round. 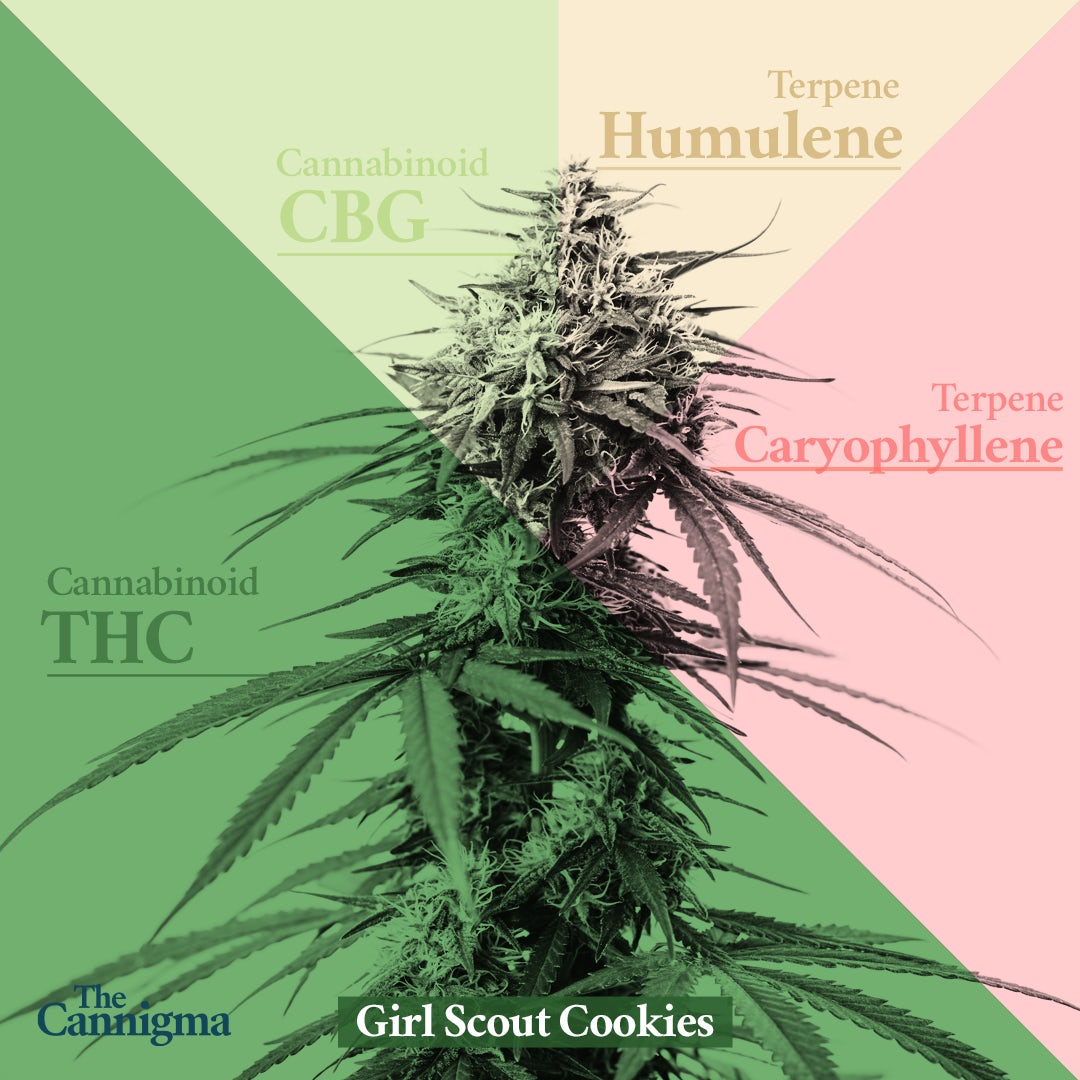 Look at any dispensary shelf or online menu, and it can seem like every other strain or product has “cookies” in the name. Since it first hit the scene less than a decade ago, the Girl Scout Cookies strain has been a runaway success that has led countless breeders to use GSC to breed their own strains — as well as no shortage of impostors who have slapped “cookies” on random products that may or may not have any relation to their namesake.

But where did Girl Scout Cookies come from? It’s most commonly-described as a cross of OG Kush and Durban Poison, but according to Jigga, the main breeder at Cookies Fam, “man, those are the stories that we put out there to keep people from trying to copy our shit.”

Of course, that quote itself could also be a bit of subterfuge of its own.

In a 2014 article, High Times quoted Jigga as saying that they had a variety called “F1” which “was one of the best strains around aside from the Kush. So theF1 was crossed with Durban Poison and stabilized, and then that strain was crossed with a kush that itself is something of a legend.” He then goes on to say that the kush was a cut brought to Southern California from Florida “by some Deadhead friend” and that “it was known as Kush until Snoop and B-Real started to name it ‘OG Kush’ — one of the dankest Kushes of all time.”

That sounds pretty close to a cross of Durban Poison and OG Kush from the outside looking in.

What’s for sure is the strain hit the scene around 2012, and it became a major hit. GSC breeders won the 2013 US Cannabis Cup in Denver as well as the 2014 High Times Cannabis Cup, among others. Its popularity in the cannabis world has also sparked legal action from the Girl Scouts of America, so “GSC” is considered the same way to stay out of court. It has also been mentioned in no shortage of rap songs in recent years, along with fellow Cookies Fam creation “Gelato.”

GSC is a slightly indica-dominant hybrid known for its sweet, earthy, cookie flavor and an aroma that is skunky and minty. It produces a strong high that can be both uplifting and cerebral and also deeply relaxing. A couple hits, and it becomes abundantly clear why it’s such a popular strain.

The chemical profile you see below is an average of laboratory tests for products called Girl Scout Cookies  — so it’s just an estimate of what you might find when you buy a Girl Scout Cookies strain. It’s often tested with high THC content (averaging 19%) and modest CBG (1%), along with terpenes  BCP (0.6%) and humulene (0.3%), limonene (0.3%) and myrcene (0.2%).

Myrcene 0.21%
* The numbers in the tables are averages of data from multiple resources
** Terpenes are of pharmacologic interest at concentrations above 0.05%

But really, marijuana affects people in different ways. The two main factors are your own biology (your endocannabinoid system, metabolism, age, weight, etc). and the product you choose (including its cannabinoid profile and terpene breakdown and the delivery method used).

Girl Scout Cookies isn’t considered the easiest strain to grow and its yield is somewhat on the low side. That said, you don’t need to be an expert by any means, and even with a small yield you’ll have at least several ounces of one of the cannabis world’s most-acclaimed strains.

The strain is considered resistant to disease, mildew, and pests, and it can be grown both indoors and outdoors, though it is known for thriving especially indoors. GSC grows to a medium height and should be ready in 9-10 weeks or around mid-October if grown outdoors.

The reputed parent strains of GSC — Durban Poison and OG Kush — are two of the most acclaimed strains in the cannabis world. Durban Poison is a highly-popular South African landrace strain known for producing a creative, upbeat, and energetic high that makes it a perfect daytime strain. OG Kush can produce a more euphoric, heavy high that hits both the body and mind. Traditionally, most kush strains create a more relaxing high. The sensations described by users of both Durban Poison and OG Kush are similar to how the effects of GSC are described.

It also features in one of the more acclaimed Cookies Fam offerings, Gelato (a cross of Sunset Sherbet and Thin Mint GSC) as well as Animal Mints (a cross of Animal Cookies and Blue Power, which has been used in the genetics of Wedding Cake, one of the more popular cannabis strains in recent years).