Just because most of us have cancelled our travel plans this year doesn’t mean you can’t burn some jet fuel anyway. The Jet Fuel strain — also known as G6 — is a sativa-dominant hybrid that produces a strong, energetic high and a nice diesel aroma that’s reflected in the name. You could probably get a similar sensation by smoking a joint on an airport tarmac, but that doesn’t seem like the safest way to spend the afternoon. Instead, get some sweet, pungent buds of Jet Fuel and you’ll be at cruising altitude in no time. 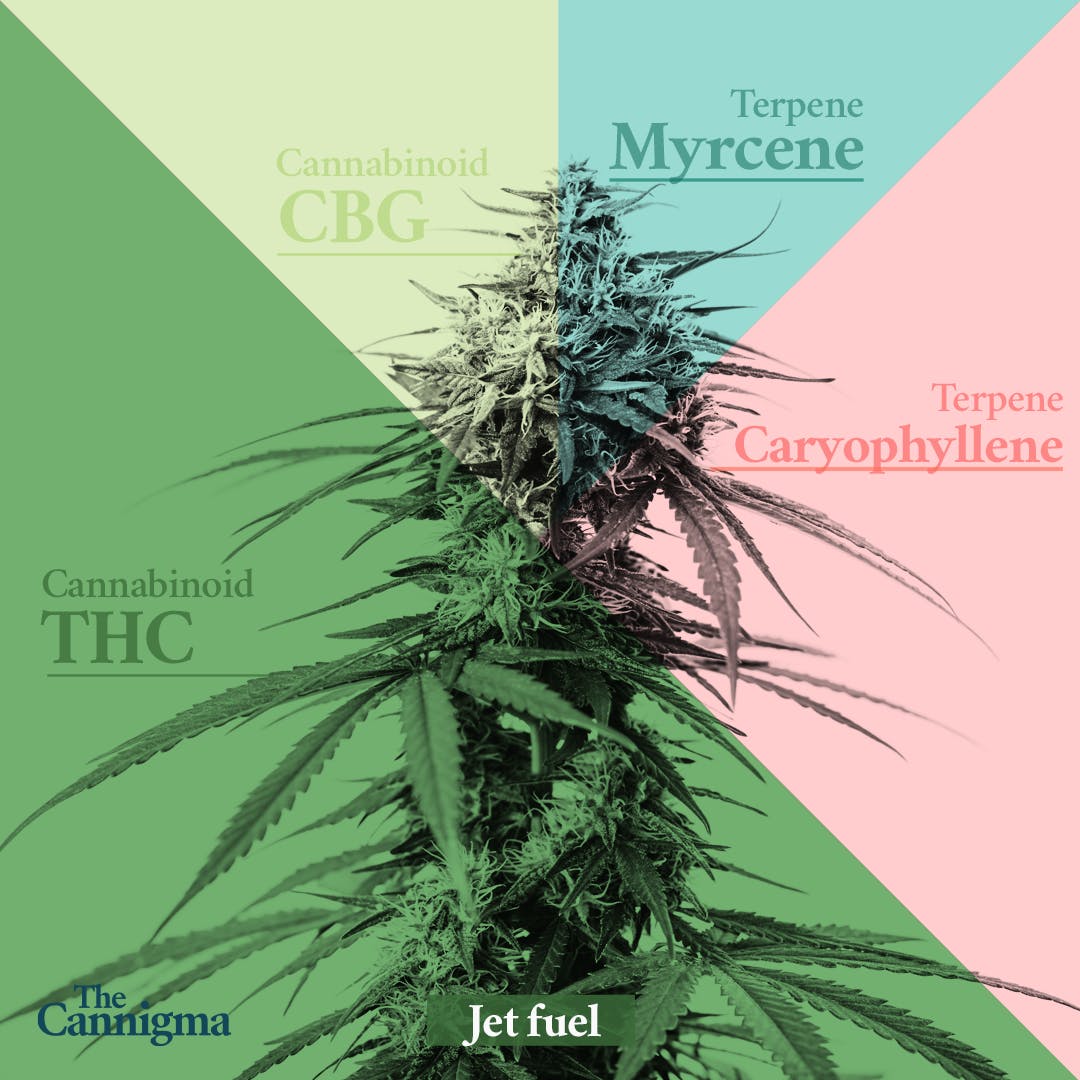 Everyone knows the first motor-operated flight was outside Kitty Hawk, North Carolina in 1903, but the origin story of the Jet Fuel strain is a bit up for debate.

The creation of the G6 strain is usually credited to the growers at 303 seeds in Colorado, who in a seedfinder post describe the strain much like a travel agency:

“How will the rich and famous get to Aspen this year? In their new Gulfstream G650 (G6) with a glass of champagne and an overstuffed bowl of our newest elite hybrid: Jet-Fuel! This is the holy grail for OG/Diesel crosses, with a dash of G13 Haze for ultimate potency. Want to fly like the rich and famous? Time for some Jet-Fuel.”

In the post, the strain is described as a cross of Aspen OG and High Country Diesel, adding, “this weed is strong and long-lasting.”

To complicate matters a bit, a Weedmaps post on Jet Fuel OG adds another theory, that it was the first strain grown by the cannabis brand Jet Fuel.

“According to CEO Enas Barkho, Jet Fuel OG “was our first strain under the Jet Fuel brand. Since the strain smelled like high-quality gas, it lent itself to the name.” He added, “We’re cultivators and producers of our own flower. We’re the actual growers. We’ve worked with this plant for a very long time. It’s personal to us, and that makes all the difference,” the post reads.

There does appear to be much more of a consensus regarding 303 seeds as the first in flight, and the ones responsible for dusting Aspen OG females with pollen from a male High Country Diesel.

Users describe the Jet Fuel strain as an especially upbeat sativa-dominant hybrid with a cerebral, energetic high that shoots you off the tarmac, before bringing you into a chill vibe at cruising altitude for the remainder of your flight.

The aroma and taste are most-commonly compared to fuel — much like its High Country Diesel father, and you may find there’s a pungent weed contrail behind you as you smoke.

Cannabinoids and terpenes in Jet fuel

The chemical profile you see below is an average of laboratory tests for products called “Jet fuel” “Jet Fuel OG” or “G6” — so it’s just an estimate of what you might find when you buy Jet Fuel weed.

Humulene 0.28%
* The numbers in the tables are averages of data from multiple resources
** Terpenes are of pharmacologic interest at concentrations above 0.05%

How Jet fuel og affects you

Based on user reports, Jet Fuel OG often produces happiness, relaxation, upliftment and euphoria. Common side effects are dry mouth and dry eyes, and it also sometimes causes dizziness. But really, marijuana affects people in different ways. The two main factors are your own biology (your endocannabinoid system, metabolism, age, weight, etc). and the product you choose (including its cannabinoid profile and terpene breakdown, and the delivery method used).

Jet Fuel is considered a moderately-difficult strain to grow, largely because it can grow so tall and needs some regular pruning to keep in check. It also requires careful monitoring of the temperature and humidity, which combined with its height means it may be better to grow it indoors if you have enough room for it to stretch out.

If grown inside, Jet Fuel OG can easily grow six feet tall — and as high as 10 feet outside! It also produces a pretty solid yield — around 14 ounces per plant if grown outdoors, and around 1 to 1.2 0-12 ounces per square feet indoors.

The strain takes longer than some others to flower — around 9-10 weeks, and if you’re growing outdoors, you should be able to harvest in October.

The Jet Fuel parent strain Aspen OG is a lively cross of SFV OG and Sour Cream – the latter a descendent of Sour Diesel. The strain is described as having a potent cerebral high, much like how Jet Fuel is characterized. The other parent strain — High Country Diesel — is a diesel crossed with OG Kush, and produces a strong, chill, couchlock vibe. One can imagine how Jet Fuel got its combination of energetic, cerebral effects and a relaxing vibe that follows.

Jet Fuel itself was used to breed the strain Rocket Fuel, a cross with Face Off OG, known for producing a balanced high that’s both euphoric and calming. Others cited by Seedfinder include Jetstream (a cross with Pineapple Express), Afterburner (a cross with Trainwreck and Gorilla Glue) and Aero Bond (a cross with Gorilla Glue), and there could be many others up there in the

Products Dr. Dabber Boost EVO review: is this e-rig worth it?
Previous Article Clementine Next Article Girl Scout Cookies
The Cannigma uses cookies to improve your experience and to show you personalized adsACCEPTPrivacy Policy
Manage consent