Powerful, reliable, and popular the world over – AK-47 is a marijuana strain that has a lot in common with its namesake rifle. But don’t let the name fool you – this potent sativa-dominant hybrid is known for being a mellow strain that produces a relaxing, euphoric high. AK-47 is a favorite of both medicinal recreational smokers, and since it first hit the scene in the 90s, it has won more than two dozen cannabis awards, including the High Times Magazine strain of the year in 2004. 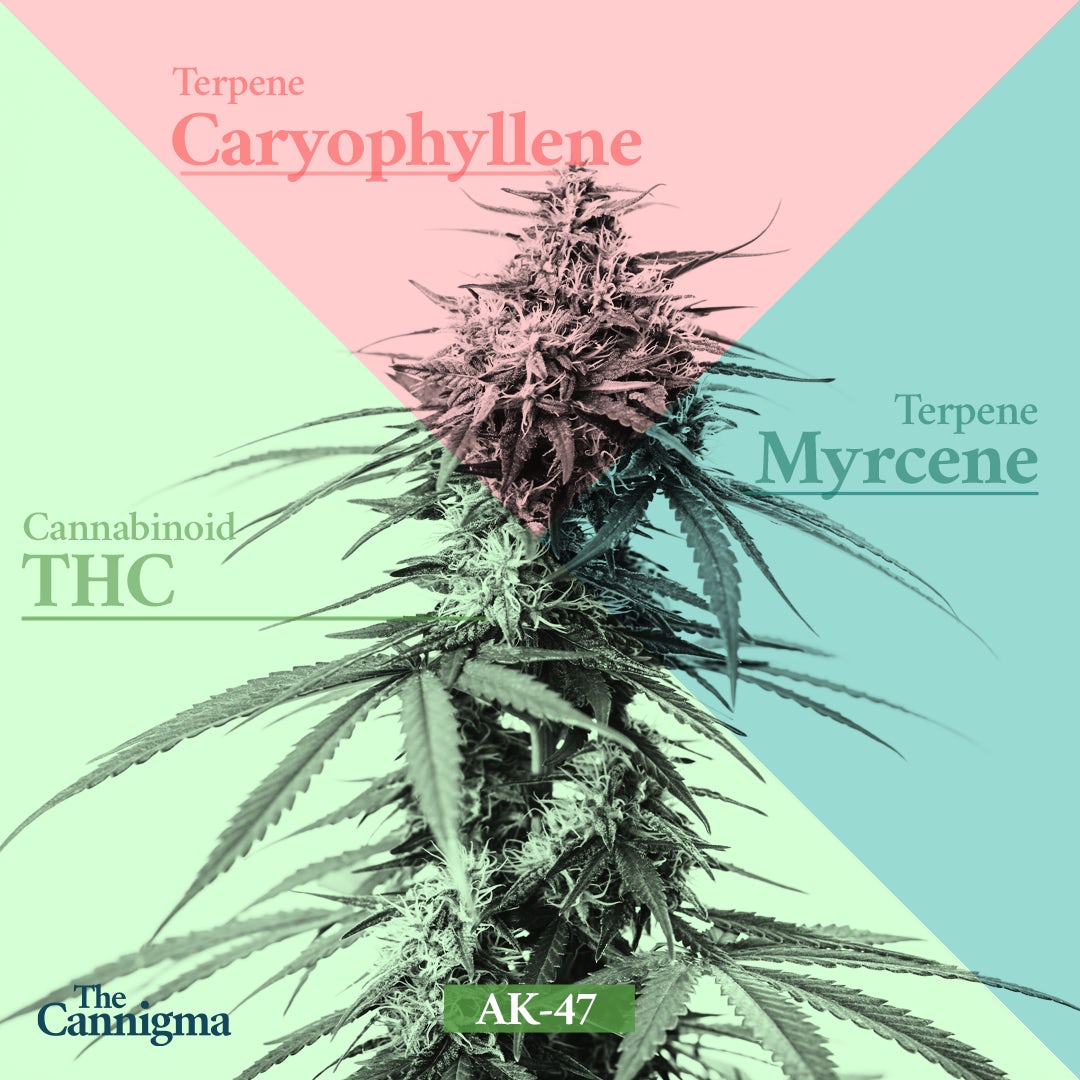 The origin of AK-47 can reputably be traced to a cross of Thai and Afghani strains made back in the 70s, but the AK-47 chemovar we know and love today was first crafted by the Dutch seed house Serious Seeds in the early 90s. Its parentage is most-commonly described as being a combination of Colombian, Mexican, Thai, and Afghani landrace varieties.

As Serious Seeds explains, the name was chosen not because of any support for violence or guerilla warfare during the Cold War, but rather, because this is a strong “one-hitter quitter” that should impress even your stonier friends. (Serious Seeds refers to it as a “one-hit wonder,” but you get the idea.)

According to Serious Seeds, “after its introduction, visitors to coffeeshops in Amsterdam regularly passed out after a hit of the AK-47.” Now, there are all types of reasons that someone could be found passed out at a coffeeshop, but make no mistake, strains don’t win that many cannabis awards for no reason.

In the Cannabis Pharmacy, the authors posit that the name “AK” may stand for Afghan Kush, though they first acknowledge that it takes its name “from the rapid onset of its psychoactivity.” The book credits Simon, the well-known founder of Serious Seeds, as the chief breeder of Ak-47, adding that he actually didn’t start smoking cannabis until he was 25.

This is a sativa-dominant hybrid that can produce a sort of couch-lock feeling people more associate with indicas. But even with the deeply relaxing feeling, many fans also report that AK-47 makes them feel energetic, creative, ready to march through the jungle to wherever the day takes them. It should be noted though that according to science, the sativa or indica make-up of a strain is not responsible for its effects.

Described by Serious Seeds as having an “extremely STRONG odour and smoke,” AK-47 is also known for producing compact buds with a thick coating of trichomes and orange hairs. It can have a powerful, sour and skunky aroma, and a citrusy flavor with floral notes.

Cannabinoids and terpenes in AK-47

The two main methods of choosing your weed are traditionally by its sativa/indica genetics, or the so-called “strain” name. Both of these methods are now accepted as scientifically irrelevant, at least if you’re trying to predict effects or medicinal properties. Indica and sativa are botanical terms that speak morphology, rather than the compounds in your weed. Strain names, on the other hand, are unregulated or standardized. A dispensary in California can sell a product named AK-47 that has 25%THC and is limonene dominant, while another in Denver will have a marijuana product also called AK-47 with 15% THC and myrcene dominant. Who’s to say which is right?

This is why it’s encouraged to look at the certificate of analysis of marijuana products, assuming your dispensary has them. This way you can educate yourself about the main cannabinoids and terpenes in cannabis, and pick your chemovar (chemical variety) by the potential effects or therapeutic values of the different products.

Below is a table with the averages of the main cannabinoids and terpenes in AK-47 according to test results we gathered from a variety of third party laboratories, as well as information from websites such as Leafly and Weedmaps. This isn’t the definition of the chemical profile of AK- 47, but rather an idea of what you can expect, knowing that the levels of each compound could vary. In any case, it’s important to remember that no matter what information you find about AK-47 online, what will determine your experience is the compounds in the specific AK-47 weed you get your hands on.

Limonene 0.2%
* The numbers in the tables are averages of data from multiple resources
** Terpenes are of pharmacologic interest at concentrations above 0.05%

How AK-47 affects you

The THC concentration of 16.6% should cause a moderately intense high, and the potential synergy with myrcene and BCP might potentiate this sedation. On the other hand pinene is thought to counteract some of THC’s side effects, and limonene is considered uplifting. Research on cannabinoids and terpenes synergy (aka the entourage effect) is still nascent, so we don’t yet have a clear understanding of how exactly these compounds influence one another. If you have access to the CoA you can examine the profile of your bud and test the effects yourself.

From a medicinal point of view, this profile could potentially help with conditions such as dementia, asthma, acne, Parkinson’s disease, IBD, pain and inflammation.
Though most of the knowledge we have about cannabinoids and terpenes is based on preclinical research, they are considered as generally safe to use. In any case you should consult with a health practitioner that specializes in cannabis treatment before choosing your product and treatment regimen.

AK-47 is a relatively easy strain to grow, and produces healthy yields of potent bud, with a short flowering time of only around 7-9 weeks — so it’s no wonder it’s a favorite of growers.

Partly because of those sticky, trichome-covered buds, AK-47 can have problems with mold and mildew so it may be better for indoor grows where the environment can be better controlled. It grows moderately high, and if grown outside, prefers a sunny and dry climate, and should be ready for harvest in the end of October. Naturally though, the size of your plant will depend on how early you plant it .

As Serious Seeds advises, this is a strain with a very powerful aroma, so try to control the odor and use good ventilation methods if you have nosey neighbors next door.

AK-47 has been used as a parent to a number of similar strains such as Blueberry AK, Cherry AK-47, or Purple AK-47, which are quite similar to AK-47 and easy to spot if you just look at the name.

Ask the Expert Can I substitute coconut oil for vegetable oil in weed gummies?
Previous Article Jack Herer Next Article Gelato
The Cannigma uses cookies to improve your experience and to show you personalized adsACCEPTPrivacy Policy
Manage consent