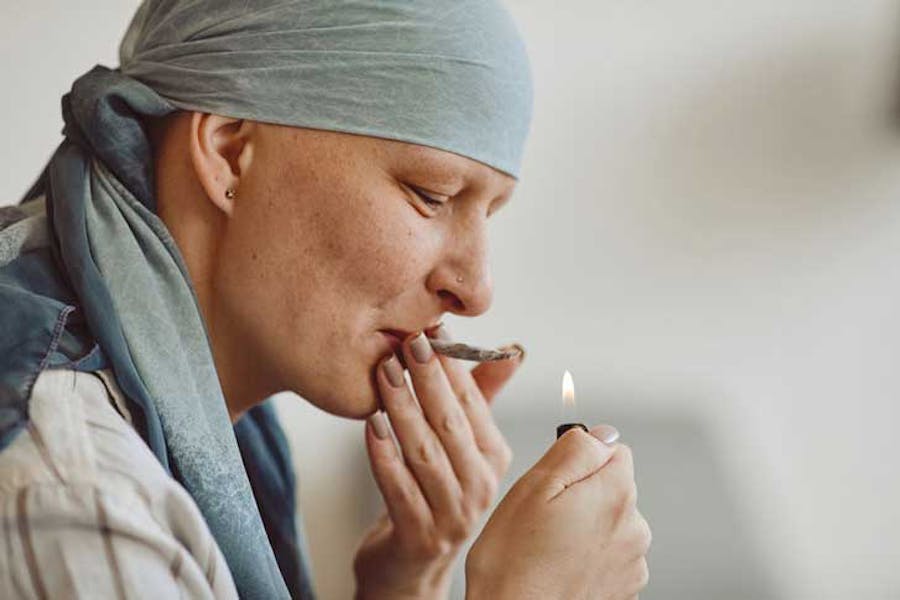 A cancer patient smokes a marijuana joint for the first time. (seventyfour74/123rf)

For decades, marijuana was known as an illegal drug and a subculture of its own, far from the mainstream. In recent years though, scientists have found more and more evidence of its therapeutic potential. Cannabis has become a trusted, daily medication for millions of people across the world, treating conditions ranging from anxiety to arthritis to the nausea caused by chemotherapy, without the dangerous and harmful side effects of many popular pharmaceuticals.

The world of cannabis also has an entire language all of its own. In this introduction to medical marijuana, we’ll break down how cannabis works, how patients can use cannabis, what to look for when deciding which cannabis product to use, and how to get a medical card in minutes.

How marijuana works: What is the endocannabinoid system?

In the early 1990s, researchers discovered a previously unknown communication system involved in the regulation of nearly every essential function in the body. They named it the endocannabinoid system (ECS) after the plant elements that led researchers to its discovery — cannabinoids.

The ECS modulates many of the body’s most important functions, including sleep, hunger, pain, anxiety, nausea and energy metabolism, among others. In fact, the endocannabinoid system is so vital to maintaining homeostasis — a state of balance in the body — that some researchers believe many health conditions can be explained by endocannabinoid deficiencies. These conditions include migraines, irritable bowel syndrome, and fibromyalgia, among others.

Under the effects of illness, injury, or environmental stress, the need for endocannabinoid messengers can exceed the supply. When the body needs more of these essential messengers than it can produce, the communication between vital processes can break down.

Plant-based cannabinoids (phytocannabinoids) like those in cannabis, can influence ECS functions, helping them regulate body functions.

There are more than 500 different chemicals in cannabis, including at least 140 which are known as cannabinoids — compounds unique to marijuana alone.

The two most prominent cannabinoids are tetrahydrocannabinol (THC), which provides cannabis with much of its psychotropic and medicinal effects, and cannabidiol (CBD), which is touted for having medicinal benefits without the same intoxicating “high” of THC.

THC can be used as an analgesic and anti-inflammatory, and for its ability to prevent nausea and vomiting, and increase appetite. The high caused by THC can cause feelings of euphoria and calm, which can uplift depression and ease anxiety.

CBD, on the other hand, doesn’t cause the same psychotropic high as THC, and doesn’t impair patients’ ability to function normally. Proposed uses for CBD include as an anticonvulsant, anti-inflammatory, antioxidant, and antipsychotic, and its ability to ease pain, anxiety, and depression, among other uses.

Terpenes are compounds that produce the aroma and taste of cannabis (and a variety of other plants) and the reason one “strain” of marijuana tastes like lemon, while another gives off a piney aroma.

Scientists also believe that the varying sedating, uplifting, and other distinguishing effects of cannabis strains are a result of their terpenoid profile and that terpenes play a role in the medical therapeutic effects of cannabis. The terpene levels are often presented on the packaging of medical marijuana products, next to the THC:CBD ratio and sativa-indica origins of the strain.

How to dose cannabis

With most medications, dosing is pretty simple — there are clinical trials, FDA approval, and recommendations handed down to doctors and pharmacists based on specific chemical calculations.

For cannabis, dosing is not yet an exact science and a much more individualized approach is required.

A doctor prescribing cannabis must consider the best delivery methods for their patient as well as the right CBD-to-THC ratio, terpenes, or which strain of marijuana is best for the patient.

Today’s marijuana products can be quite potent so patients should be advised to “start low and go slow,” by taking a low dose and then increasing it as needed, after gauging the effects. The first time using cannabis should also be done in a comfortable place and with a trusted confidant.

Cannabis is typically taken 2-3 times daily and most patients do not exceed 1–3 grams of cannabis per day. In general, patients tend to develop tolerance to the psychotropic effects of THC rather quickly, but this doesn’t result in a reduction in the therapeutic benefits.

How to choose a strain

In addition to how one takes cannabis, the type of cannabis is also very important. Cannabis “strains” are often divided mainly into two botanical distinctions — sativa and indica (or “hybrids”, which are a mix of the two). Sativa strains are said to provide a more energetic, cerebral sensation. Indica strains are said to be more relaxing, the type that you’d want to use at night. Many cannabis patients use this distinction in order to decide which strain to use and when to use it.

But there’s actually no scientific evidence to support the notion that the effects a strain has on the user are linked to botanical indicators like indica and sativa. Nonetheless, it’s impossible to completely discount anecdotal evidence and the lived experiences of cannabis patients who know how particular strains affect them.

Finding the perfect strain can be both enjoyable and difficult. First off, our bodies are unique. Some people love spicy food, others prefer sugary food. Some get hyper on coffee and others can drink it right before bed. Two people sharing the same joint can experience different effects, because their body systems react differently to the same substances.

Secondly, just like our bodies, cannabis strains are unique. Cannabinoids and terpenes interact with each other in a way that science is yet to fully understand. But there are some methods you can follow to find the best strain for you — ideally you’ll use a combination of all three:

How to consume cannabis

Cannabis delivery methods mainly fall into one of three categories: inhalation, ingestion, or topical (dermal) application. Each has its own pros and cons.

Inhalation is the most popular delivery method, largely because it’s convenient, simple, fast-acting, and enjoyable. When cannabis is inhaled, it directly enters the lungs en route to being absorbed into the bloodstream, creating almost instantaneous onset. There is also the fact that smoking in and of itself — be it with a pipe, “bong,” or marijuana cigarette (“joint”), can be a therapeutic, enjoyable exercise.

One major downside of smoking is that it can be harmful to the lungs and throat. For this reason, it is advisable for people with pulmonary conditions to avoid smoking. Smoking also produces a strong aroma and secondhand smoke, and is not the most discrete way to consume cannabis.

That’s where vaporization comes in. Vaporizing cannabis has exploded in popularity in recent years, largely because it’s much more discreet than smoking but also because it heats up the flower just enough to release an inhalable vapor, without the harmful effects of igniting organic plant matter.

When taken orally, cannabis is absorbed through the gastrointestinal tract or sublingually underneath the tongue. It can take as much as an hour and a half for patients to feel the effects of “edibles” to kick in, and they can have a long-lasting, potent effect without the harmful effects of smoking. Sublingual administration has a quicker onset more akin to smoking or vaporizing.

In addition to edible THC and CBD cookies, brownies, infused drinks, and gummies (to name just a few of the countless forms of edibles available today), ingestibles can also be taken in the form of oils, tinctures, pills, capsule, powder, and tablets.

Because of the delayed onset and potent strength, with ingestibles the mantra “start low, go slow” is especially relevant.

Topical applications involve balms, salves, and creams which are made with a cannabis extract/concentrate mixed with a base like beeswax, shea butter, or coconut oil. For people with intense pain, dermal applications may not be strong enough. These patients may prefer applying cannabis by way of a transdermal patch, which penetrates the skin and is absorbed through the bloodstream producing a systematic rather than a local effect.

Though cannabis is a very safe form of medication, everything you put in your body has side effects — both positive and negative.

THC can cause short term memory loss, an inability to focus, slowed reflexes, as well feelings of paranoia and anxiety at times. It’s also known for causing a dry mouth, red eyes, and an increased appetite, the so-called “munchies.” While for some users “side effects” like the munchies can be desirable (especially if they are coping with nausea or a medical condition that causes loss of appetite), for others this may not be the case. Regardless, these are all side effects that wear off quickly once the high is over, though they can still be unpleasant or unwelcome at times.

In addition, smoking cannabis can result in many of the same respiratory side effects that are caused by any form of smoking. People with respiratory conditions such as COPD should consider other delivery methods.

Long-term cannabis use can also be habit forming for a small number of users, and like with any substance, it should be used in moderation.

People who have a history of psychosis may be advised to avoid using marijuana due to the risk that THC could exacerbate dissociative or psychotic tendencies.

CBD is also considered quite safe, though it can have some side effects, including changes in weight/appetite, nausea, fatigue, and diarrhea.

In addition to side effects, cannabis can have interactions with a wide range of medications from calcium channel blockers to blood thinners to selective serotonin uptake inhibitors and antidepressants. It can also intensify the effects of depressants like alcohol, barbiturates, and opioids, among others.

Patients who are already on a prescribed medication routine should consult with their physician before starting medical cannabis in order to avoid any adverse drug interactions.

For new patients, discovering the world of medical — or recreational — cannabis can be a bewildering experience at times. That’s partly due to the fact that cannabis is such a complex plant, and the culture and industry surrounding medical and recreational marijuana is so vast. Like with dosing, it’s advisable to start low and slow, and to remember there is an ever-expanding base of research behind the science of cannabis. Furthermore, countless patients and fellow travelers who have been in your shoes before and can provide advice and a helping hand.

Find out how to try medical cannabis in your state.

Regulation Is weed legal in Thailand?
Previous Article 5 cannabis industry leaders you should know Next Article Cannabis at the bar?
The Cannigma uses cookies to improve your experience and to show you personalized adsACCEPTPrivacy Policy
Manage consent