Home Physiology The munchies: Why does weed make you crave food? 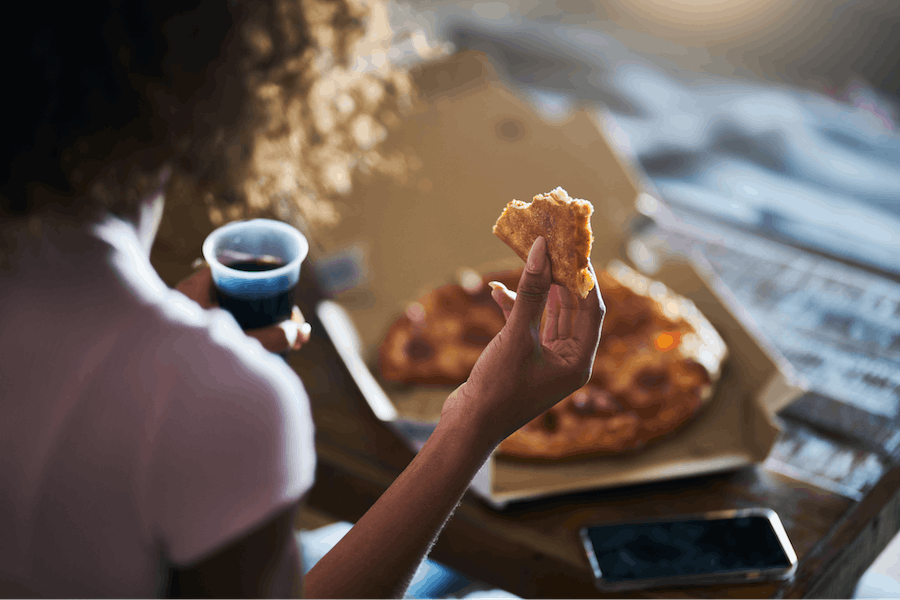 A young woman with the munchies eating pizza. (Shutterstock)

If you’ve tried cannabis — particularly a variety with high levels of THC — you’ve probably experienced one of its most notorious side effects: “the munchies.”

You may have an irresistible urge to snack on something delicious. And once you open that bag of chips, you might find it tastes way better than it did before — which can lead to some serious snacking.

What is it about cannabis that causes the munchies?

The munchies can be explained by looking at how cannabis activates our endocannabinoid system, an internal body system which helps regulate many basic functions such as sleep, mood, memory, immune response, and, you guessed it — hunger.

Cannabis, and THC in particular, stimulates our appetite by activating one of the two primary endocannabinoid receptors — CB1. That sets off a chain reaction of effects which can lead to hunger and increased feeding.

One of these effects is the release of ghrelin, a hormone that is usually secreted when the stomach is empty. This triggers the feeling of hunger and lets the brain know it’s time to find more food. In experiments with rats, THC-rich cannabis use led to ghrelin release even when the stomach was already full, which led to more feeding.

It may be that for humans, as well, marijuana can enhance our perception of food and thus increase cravings. Other studies also indicate that stimulating CB1 can make food taste better, making eating more enjoyable and food more palatable.

The munchies as medicine: Using weed to stimulate appetite

For some patients, such as those with HIV, cancer, or anorexia, an increased appetite can be a big help with the healing process. These conditions, or their treatments, often cause a lack of appetite and other changes, making it difficult to maintain a healthy weight or absorb important nutrients. Marijuana can help by inducing the munchies.

For example, studies on patients with HIV have found that using cannabis can help increase food intake and weight gain. But this may only be in the short term, as other studies have found that repeated dosing could result in a tolerance to these effects.

Both human and mice studies have shown that dronabinol (THC) increased appetite and weight gain in anorexia, helping with recovery. Patients with cancer have also benefited from the munchies when it comes to gaining or maintaining a healthy weight. So, the munchies are more than just an added perk that makes your food taste great. It can actually be a very medicinally powerful tool for healing when patients have difficulty with appetite and weight gain.

Can marijuana help with weight loss?

You might think that the research above means cannabis use necessarily causes weight gain. But interestingly, scientists have noticed the paradoxical result when examining weight gain and cannabis use. They found that while cannabis use does tend to increase caloric intake, cannabis users tend to have lower weight and less obesity than the general population. This has even led some researchers to suggest it could be used as a treatment for obesity. (CBD is thought to have appetite suppressant characteristics, and researchers are looking at it as a possible  treatment for obesity and diabetes.)

This paradoxical result may have something to do with how THC affects our gut. A study on obese mice eating a high fat diet found that those treated with THC did not gain weight, while those who weren’t using THC did. Interestingly, the THC-treated mice had a change in their gut microbiota. Instead of having a gut microbiota like normal obese mice, the guts of the THC treated obese mice transformed to look more like those of healthy mice.

Another potential mechanism by which cannabis prevents weight gain and metabolic problems is through its actions at peroxisome proliferator-activated receptors (PPARs). These receptors are involved in fat and energy balance in the body and could be one way cannabis can cause some people to eat more, but gain less.

Overall the munchies are a pretty great side effect of cannabis. And while there is no need to worry much about the munchies causing weight gain, the foods you eat still can impact the way you feel. Remember to keep healthy snacks around while partaking, and expect to have a stomach that is bigger than your eyes. Cannabis may help drive healthy changes to weight in both directions: helping to restore a healthy weight to those with low appetite, and helping regulate weight for others.