Also known as Blueberry Haze or Azure Haze, Blue Dream is a staple in almost every dispensary on the West Coast of the US. Popular among recreational and medical cannabis users alike, this strain is known for its potency and versatility. For growers, too, this strain is something of a favorite, with a relatively high yield even in outdoor settings. Despite its sativa origins, Blue Dream is said to have "couch-lock" qualities at high doses. 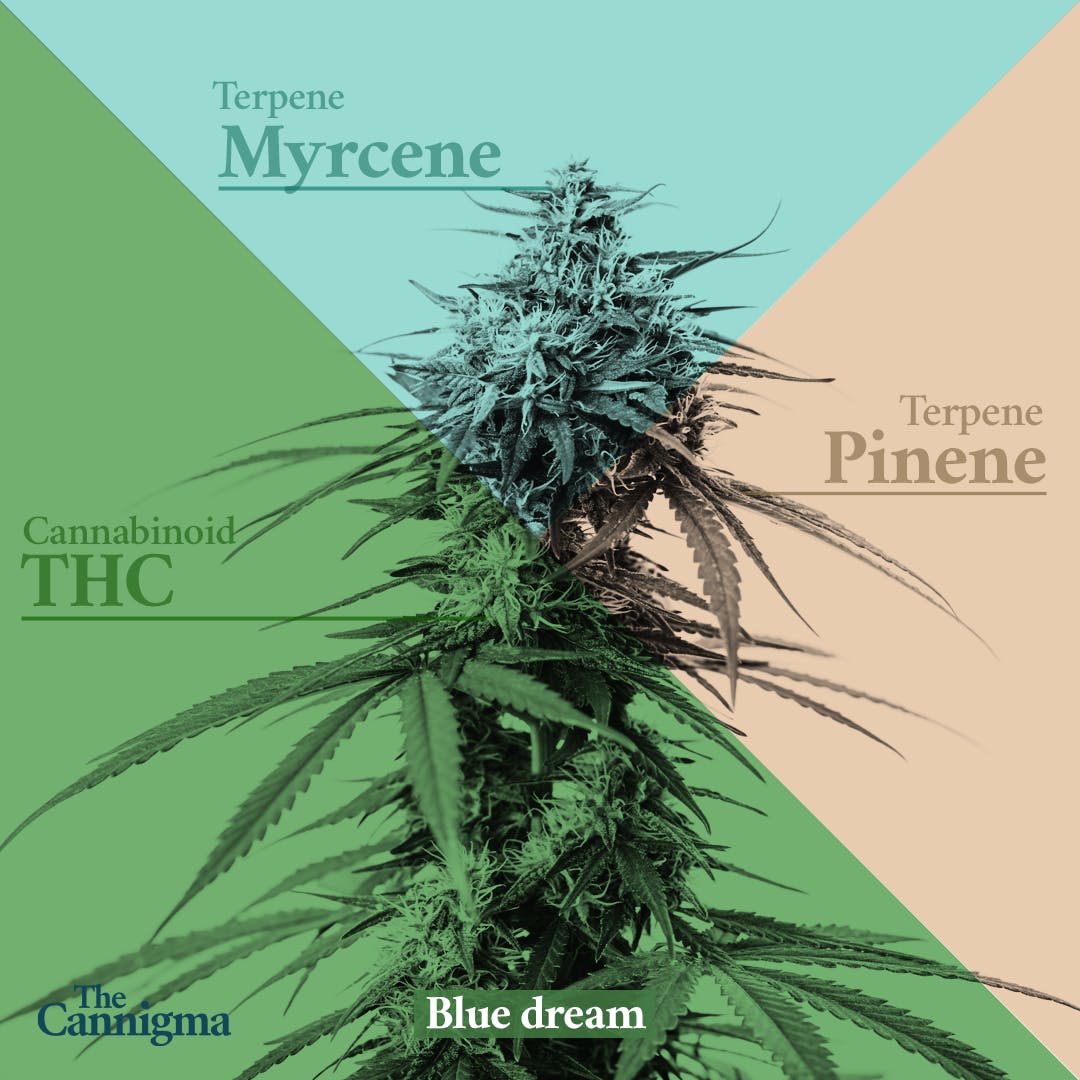 With origins in California’s Emerald Triangle, Blue Dream is a crossbreed between Blueberry and either Haze or Super Silver Haze, depending on who you believe. Blueberry is a marijuana celebrity of sorts, having claimed the High Times Cannabis Cup in 2000 for Best Indica. It is known for its strong sedative effects and euphoric high. On the other side of the lineage, Haze strains are generally regarded for their uplifting, energetic qualities. This mixed heritage could account for the mixture of relaxing and uplifting effects often reported in Blue Dream, though research would indicate that it’s more likely related to its terpene profile.

While there are no clear accounts of its history, online literature holds that it appeared in the Santa Cruz area sometime in the early 1970s. In more recent years, legendary cannabis breeder DJ Short stumbled on the cultivar, and revamped it to the version that’s prevalent around the US today. Since the mid-90s, when medical marijuana dispensaries first opened their doors in California, the strain has been popular among patients.

In a true feat of cannabis multiculturalism, this variety melds Thai, Colombian, Indian, and Mexican genetics.

Cannabinoids and terpenes in Blue Dream

Cannabis varieties such as Blue Dream are often referred to as strains or cultivars, but in fact the most accurate term would be “chemovars.” Strain refers to bacteria and viruses, and cultivars is an abbreviation of “cultivated variety,” one that has been intentionally created or selected and maintained by cultivation.

Talking about the chemical profile of a given cannabis variety can be tricky. There’s no standard definition for Blue Dream — or any other strain for that matter — from a chemical perspective. In theory any grower can cultivate any strain of cannabis with any kind of chemical profile, and name it however they wish. So it’s difficult to definitively state the THC, CBD or CBG content of Blue Dream.

For this report, we gathered Blue Dream’s chemical profile from a variety of third party certificates of analysis, seed banks and marijuana websites such as Wikileaf, Leafly and ILGM.
The following numbers can give you an estimation of what you could expect to find in Blue Dream chemovar, but your best bet is always going to be looking for a certificate of analysis before you choose a cannabis product — this way you’ll know for sure what’s in it.

From the reports we found about the cannabinoids in Blue Dream:

As for the terpenes in Blue Dream:

How Blue Dream affects you

While of course different strains affect different people in different ways, there seems to be a consensus on the combination relaxing and uplifting effect of Blue Dream. And this makes sense from its lineage — Blueberry is known to be a sedating, classic indica strain, whereas Haze, and indeed most Haze varieties, are praised for their buzzy, cerebral effects.

With all this talk of indica and sativa, a word of clarification is necessary.  It’s widely believed that sativa strains give an uplifting and cerebral effect, while indica strains provide a relaxing full-body “high.” Yet, despite this ingrained belief within mainstream cannabis culture, there’s actually zero scientific evidence to support this notion. In fact, research reveals that there are a lot of other factors at play that cause a specific strain to produce certain effects — and whether it is a sativa or indica plant has little to no importance.

What has more significance, though less empirical and far more subjective, is the experience of the masses. In the words of award-winning cannabis cultivator Kyle Kushman in the Nextflix mini-documentary Explained: Weed: “When you have someone labeling something as 70% sativa, 70% indica, it’s 100% subjective. It’s done by somebody smoking it and deciding that they are getting either an indica or a sativa effect from it.”

Blue Dream provides a clear example of the biphasic effects of cannabis — in which low and high doses cause opposite effects. According to Cannabis Pharmacy by Michael Backes, Blue Dream is often uplifting and energizing at low doses, whereas at higher doses patients report strong sedative effects. Given this versatility, with careful dosing it can be useful for treating pain, nausea and insomnia alike. It’s also praised for its effectiveness in treating gastrointestinal issues.

While some users on various marijuana websites say it helps relax them for a good night’s sleep, the majority use it for daytime dosing. Given this versatility — in that it can be used throughout the day and for various activities — it has remained consistently available in California and other West Coast dispensaries since the early 2000s.

Blue Dream is a good choice for daytime pain relief, with its balanced effects providing both muscle relief and analgesia without being too sedative. According to Cannabis Pharmacy, this variety can also be effective for easing muscle spasticity and stiffness of multiple sclerosis.

Widely considered both a daytime and nighttime strain, this variety has long-lasting body and head effects. It’s known to be relaxing and uplifting, with many users enjoying bursts of creativity at moderate doses. In terms of adverse effects, the most common reports are of dry mouth and eyes, while reports of paranoia, dizziness and anxiety are rarer.

Blue Dream is something of a grower’s dream, suitable for novices and experienced cultivators alike. It blooms happily indoors or outdoors, after 55-70 days. Its ideal harvest time for outdoor cultivation is around mid-October in the northern hemisphere.

This cultivar thrives in most environments, including cost temperatures. The plants are very tall, often reaching a height of 150 inches (approximately four meters).

The exact lineage of Blue Dream is unclear, but, according to Cannabis Pharmacy,  some related strains are Blueberry Sativa and Blue Dragon. According to Leafly, two of its children are Pine Queen Dream and DJ Andy Williams.