Of all the methods humans have created for taking cannabis, the most traditional and time-tested is inhalation.

The reason perhaps lies in what we have learned about the pharmacology of cannabis. Science has shown again and again that the inhalation delivery method produces more immediate (and often, more powerful) effects than any other method.

Once inhaled, the smoke from combusted cannabis is absorbed through the lungs and its cannabinoids directly enter the bloodstream. From there these cannabinoids circulate into surrounding areas of the body, quickly passing through the blood-brain barrier, binding to CB1 receptors, and modulating the chemical status of the brain.

By inhaling marijuana, the slower hepatic metabolism that comes with marijuana edibles or tinctures is avoided, resulting in a faster yet slightly more inefficient delivery method.

These days, inhalation is similar to its fellow oral and sublingual delivery methods in one exciting area: product variety. The medical marijuana industry has been churning out all sorts of inhalable products and devices. Of these products, there are two primary categories: smokables and vape-ables.

Smokable cannabis products, as you might expect, include anything one can smoke in order to get cannabinoids into their system. That includes everything from joints and pre-rolls to mediums like pipes and bongs.

Smoking cannabis is fast and convenient. It may also expose users to slightly greater amounts of fully degraded cannabinoids like CBN; some studies have indicated that this cannabinoid may have anti-cancer qualities. Overall, smoking is a valuable addition to the medical marijuana patient’s therapeutic arsenal.

On a more experiential note, smoking also gives patients the opportunity to see, smell, and touch their medical marijuana for themselves. It can almost be like aromatherapy, and some people describe touching the plant itself as feeling more natural.

While smoking is convenient and fast-acting, it does have some medical downsides. Smoking can result in inconsistent dosing, as varying amounts of ignited cannabis may or may not actually make it into one’s lungs.

Cannabis smoke has been shown to contain, on average, five times more hydrogen cyanide and 20 times more ammonia than tobacco smoke. It does have lower levels of polycyclic aromatic hydrocarbons than tobacco smoke, however. And, of course, smoking anything means exposure to carcinogens.

Thankfully, this is likely worse in theory than in practice. A longitudinal study published in 2015 followed habitual cannabis smokers for 20 years and found no link between lung cancer and medical marijuana use.

A 2006 population-based study also found no correlation between cancer rates and cannabis smoking.

If you’re ready to experience the benefits of smokable marijuana, there are several different products to consider. Of course, the timeless joint continues to be a good option.

Hand pipes of virtually every shape and size are also available. Smoking cannabis through a pipe requires no rolling paper or burnable medium of any kind, so it may contain slightly fewer carcinogens than other options. Smoking via hand pipe may also result in a smoother, less “harsh” mouthfeel and overall smoking experience.

Another way to smoke is with marijuana cigarettes or pre-rolls. Just make sure they don’t contain any artificial flavoring or other additives.

Though one of the newest products in the marijuana industry, vaporization devices, commonly known as vape pens, have quickly risen to prominence in recent years. Now they stand to eclipse more established types of cannabis products. Based on some reports, they already have.

Some find that using a vape pen distances them from the stereotypes that sometimes surround the act of smoking cannabis. Vaporization can also have a more sterile, medical feel. A 2018 study found vape use tied to two interrelated factors: concealment and convenience.

Even more importantly, because vaporizers don’t produce smoke, there’s virtually no exposure to the type of carcinogens that result from smoking. The vaping experience is smooth and gentle, and it’s often flavorful because the low heat of some vaporizers may preserve delicate terpenes.

This gentleness belies what science has shown to actually be a very high absorption rate.

A study from Kentucky University’s College of Pharmacy described CBD’s “great potential” before reporting that vaporization may provide bioavailability of up to 30 or 40 percent (smokable products were found to be only around 20% bioavailable).

It’s likely that some terpenes could match this absorption rate through vaporization, at least according to Dr. Ethan Russo…yet others might not be so lucky. A study that looked at the byproducts of “dabbing” also found that heating vape-specific oils could convert their terpene content to harmful byproducts like isoprene, methacrolein, and benzene. To safeguard against this effect consider selecting a vape oil that doesn’t contain extra terpenes—and then avoid overheating it.

Thanks to the increasing popularity of pre-filled vape cartridges, vaporization also makes cannabis easier to dose. With a standardized vape pen, patients don’t need to measure out or weigh the marijuana or tincture drops. Exact dosing is still not possible using most vape pens, but doses can be easily dialed in at a more macro level.

Yet even this near-perfect delivery method is subject to potential drawbacks. Many commercial vapes use thinning agents like propylene glycol to produce their e-liquid base.

A 2017 study found that propylene glycol could break down within the body, leading to carcinogen exposure and pulmonary stress. If you’re like other vaporizer enthusiasts, carcinogenic compounds were probably what you wanted to avoid in the first place. Another additive, called polyethylene glycol 400, is even worse; it has been shown to produce formaldehyde when exposed to high heat.

The solution here is simple: prioritize quality. Patients should find a cannabis company that provides better thinning alternatives (like terpenes or MCT oil) to their consumers. Thankfully, many such conscientious companies are out there.

In mid-2019, doctors in a number of US states began reporting a mysterious lung illness in hundreds of people who reported vaping, many but not all of them with products containing THC. Health officials are unsure of the causes—one direction being investigated is the addition or presence of a bad ingredient.

Many users think vaporization is the future of medical cannabis — and they just might be right. Vape pens today can pair with your smartphone, have their temperature settings precisely adjusted, and be drawn on without pressing any buttons. Others release controlled amounts to make dosing easier.

Look for future technological advancements to cater to medical cannabis patients. Just imagine: doctors could upload patient prescriptions to a specialized app, to be shared with the patient and their “smart-vape.” The vape could then dispense its medical cannabis oil accordingly, holding perfectly to the prescribed schedule. It could even have an auto-reminder feature for busy patients.

Of course, this is only one example—but hopefully it serves to illustrate that the sky’s the limit for medical cannabis. 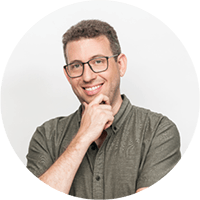 Michael Schaeffer Omer-Man is senior editor of The Cannigma. With over a decade of experience in journalism, he has a passion for storytelling, can...

Products
Cannabis Products for Pets
By Mary Biles | September 12, 2019
Research
Women Are Less Likely to Smoke Cannabis,...
By Ben Hartman | March 1, 2020
US Regulation
Cannabis in Washington
By The Cannigma Staff | February 27, 2020
Treatment
Why Some Doctors Are Uncomfortable Presc...
By Dr. Daniela Garelick | December 9, 2019