How to make and use a water bottle bong 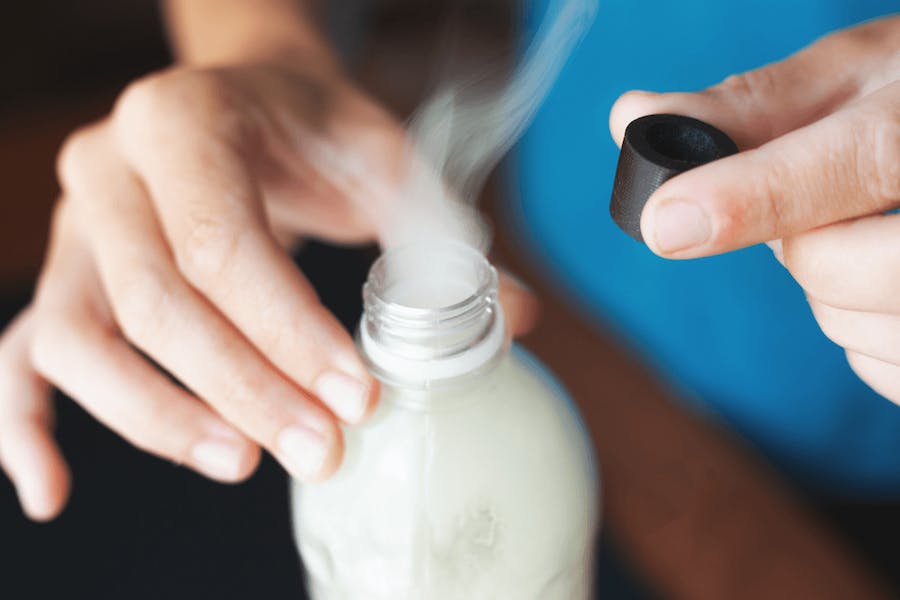 A classic alternative to glass bongs, water bottle bongs can be useful when you don't have another smoking method to hand (Shutterstock)

A cannabis fan with some great herb can be truly ingenious when backed into a corner with no bong, pipe, or rolling papers in the vicinity. When the need arises, a water bottle bong can serve as a great DIY smoking solution and one of the most practical and effective ways of recycling plastic. Here’s how to make your own.

What is a water bottle bong?

This is no trick question – a water bottle bong is just that, a water bottle that has been emptied out and fashioned into a workable bong with a few tricks and a tiny bit of elbow grease.

Water bottle bongs are not meant to last. They are a stop gap measure when you don’t have another smoking device or method at hand, and really should only be used once. But if done right, they can provide a whole lot of the fun of a bong, without costing you a dime.

A water bottle bong works the same way as a fancy glass bong does. Here’s what you need to know:

It’s a remarkably simple and effective device, and one that is surely here to stay.

How to make a bong out of a water bottle

1. Remove any and all liquid from the bottle

If it once had a sugary drink in it, make sure to wash it thoroughly first.

The stem will go from outside the bottle, through a hole in the body of the bottle, down to the bottom of the reservoir. Take apart a plastic pen or a marker and remove the ink and all other pieces other than the hollow plastic cylinder that makes up the body of the pen. This will be your stem.

3. Make a hole in the body of the bong

This is where you will force through the plastic stem. Pick a spot a little less than halfway up the body of the bong and mark it with a sharpie. Some people choose to take a knife and cut a small hole, but a great method is to take a small metal poker or some tweezers you don’t want, and heat the tip up with a lighter until they get white-hot. Immediately take the poking device and push it through the spot you marked with the sharpie until it makes a hole. While the plastic is still hot, push through the plastic stem you made from the pen. If the hole you made with the poker is narrower than the stem, it should make a tight seal as you push it through.

4. Make the hole for the carb

Just like you made the hole for the stem, do the same on the exact opposite side of the bottle, leaving a hole about the size of the eraser head of a pencil.

There are a few methods for making the bowl. If you used a plastic pen that has a cone-shaped metal tip at the end, take it and invert it and stick it into the end of the stem, creating a v-shaped bowl. If it doesn’t fit, you can take some aluminum foil and place it over the end of the stem, creating an indentation for the bowl that you then push down slightly into the body of the stem to hold it in place. Take the toothpick and punch some holes in the bowl. Be careful not to do too many or your weed can fall through.

Your bong is now ready to go, but how do you use it?

How to use a water bottle bong

Using a water bottle bong is basically just like any other bong, though due to its fragile nature you’ll need to be a bit more gentle. After all, this thing isn’t meant to last.

Take a small amount of weed and place it in the aluminum foil bowl, making sure not to pack it down hard so the foil doesn’t fall into the chamber of the stem.

2. Place one finger on the carb

Make sure to cover the carb as you’re inhaling, so that it has a tight vacuum.

3. Insert your mouth into the open top of the bong

With your mouth inserted into the top of the bong (creating a tight seal), hold a flame over the weed in the bowl and inhale strongly and steadily with your finger on the carb. As the chamber fills with smoke and you get towards the end of your inhale, release your finger from the carb and give it one just quick inhale of smoke, all of which should be forced up the chamber into your lungs.

4. Hold the weed in, exhale, repeat

It’s up to you how many times you repeat this step.

The dos and don’ts of water bottle bongs

A water bottle bong is typically a one-time tool, but there are still some things to keep in mind to make sure things go well.

Depends on what you mean by “safe.” Smoking out of a water bottle bong – or any bong for that matter – includes the same health risks as any form of smoking, though the water may filter out some of the tar. Mainly though, there is the safety risk posed by the plastic. The best way to avoid inhaling any potentially harmful plastic fumes is to not hold the flame over the plastic of the stem when inhaling, and to make sure when you get a whiff of burning plastic to shut it down and take a break until things cool off.

In addition, with repeated use, chemicals can leach out of the plastic in the bottle and can be ingested by the user. To play it “safe,” don’t use the bong more than once, and make sure none of the plastic burns.

Water bottle bongs are an effective solution when you absolutely, positively must smoke weed out of a bong but only have some improvised supplies at home. Using thin plastic materials to make smoking devices can pose some health risks, but as long as you keep this as a one-time thing used in emergencies, you should probably be fine.

And once you do want to find a permanent solution, invest in a solid, dependable glass bong.

Regulation Is weed legal in Thailand?
Previous Article Three years after legalization, what’s the state of the cannabis industry in Canada? Next Article Weed slang – the most common nicknames for cannabis
The Cannigma uses cookies to improve your experience and to show you personalized adsACCEPTPrivacy Policy
Manage consent