Home Delivery Is smoking weed bad for your lungs?

Is smoking weed bad for your lungs? 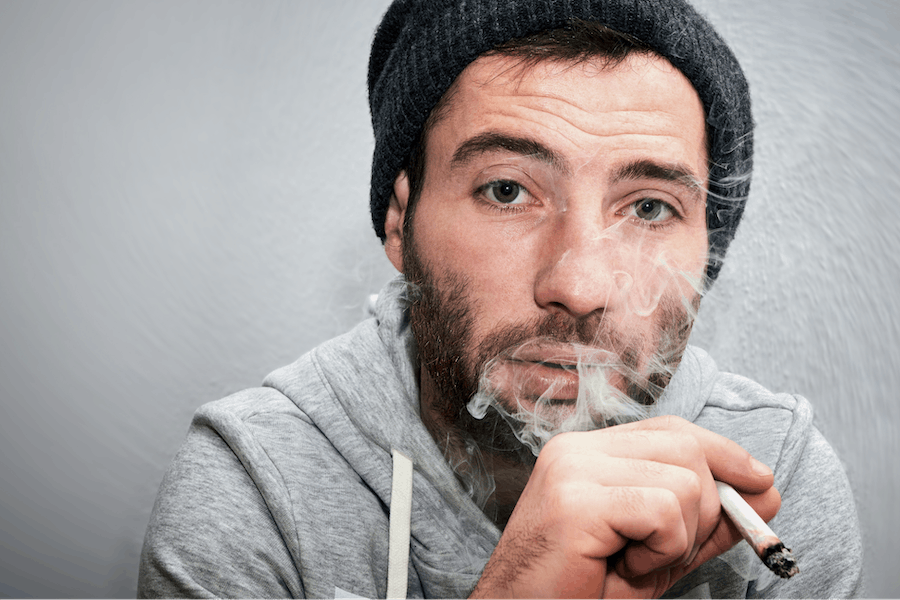 Inhaling any sort of cannabis into your throat, mouth, and lungs has health drawbacks (Shutterstock)

Though it may sound counterintuitive to everything we know about smoking cigarettes, inhaling cannabis can actually increase airflow to the lungs. Long-term use, on the other hand, is associated with respiratory complications.

When you dive into the medical studies about how cannabis affects your lungs, however, the bottom line is less clear cut, particularly because many studies have not excluded cigarette smokers from their analyses.

Of course there are also strong reasons why smoking cannabis remains so popular. It can be a highly effective delivery method for medical marijuana patients and recreational users alike — its active ingredients enter the bloodstream almost instantaneously, making its effects felt very quickly.

Here’s what the research says.

A review of existing research published in the journal “Addiction” in April, 2020 found that “although we still have a lot to learn, we have sufficient evidence to show that cannabis is not harmless to the lungs.”

The risk of bronchitis is in addition to other respiratory complications such as coughing, wheezing, and increased respiratory secretions.

A systematic review of existing research from 2007 found “an association between short-term marijuana administration and bronchodilation” in roughly one-third of studies.

None of them found “consistent association” between long-term marijuana smoking and airflow obstruction measures.

The authors of the review concluded that short-term exposure to marijuana is associated with bronchodilation, and while there is inconclusive data regarding an association between long-term smoking and airflow obstruction, “long-term marijuana smoking is associated with increased respiratory symptoms suggestive of obstructive lung disease.”

That said, like the newer review of research, the authors of the 2007 article also noted that many of the studies they looked at failed to adjust for compounding factors like tobacco use.

Some studies have found there is no measurable difference in pulmonary health between cannabis smokers and non-smokers, adjusting for other factors. One 2010 study found that in most cases, lung capacity and heath of cannabis smokers was comparable to that of people who had never smoked it.

For many people, whether the risks smoking poses outweigh its benefits and convenience may come down to personal medical history, what you’re using cannabis for, and how often you smoke it.

A potentially higher risk of infection

Cigarette smoke is known for harming cilia, the tiny hair-like projections that remove mucus and foreign matter and help keep the lungs clear and safe from infections in the respiratory system.

But does the same thing happen with cannabis smoke?

One study from 2013 found that regular marijuana smoking leads to a loss of cilia, noting that this may harm “the lung’s first line of defense against infection.”Doctors have also warned about the damage that cannabis smoking causes to these defense mechanisms, which can potentially make it easier for viruses to establish an infection in the body’s airways.

Despite some similarities like damaging cilia, the effects of cannabis smoke “is surprisingly different from that of tobacco,” a recent study states.

While the most common serious respiratory consequences from smoking tobacco are chronic obstructive pulmonary disease (COPD) and lung cancer, the “epidemiological evidence that smoking cannabis causes either of these is scant.”

Want to know which cannabis consumption method is right for you? Answer a few simple questions to find out:

The researchers also assert that “most cannabis users also smoke tobacco” and not all studies included in their analysis differentiated between cannabis-only smokers and people who smoked both. Nonetheless, since co-smoking tobacco and cannabis is quite common, it makes sense to have an adult conversation about the risk of lung damage among cannabis users.

Cannabis smoke: Not as damaging as tobacco

Like tobacco, cannabis smoke contains “known carcinogens and other chemicals implicated in respiratory disease,” according to a 2008 study.

Other research has shown that while cannabis smoke has “many of the same carcinogens and tumor promoters” as tobacco, “current knowledge does not suggest that cannabis smoke will have a carcinogenic potential comparable to that resulting from exposure to tobacco smoke.”

In other words, both types of smoke are harmful but their risks are primarily dictated by their main ingredients. With tobacco, nicotine increases the chances of damage to your genes,whereas cannabinoids decrease the likelihood of lasting DNA damage..

Is vaping marijuana bad for your lungs?

Regardless of what some research has found, concern about the health effects of smoking is one of the reasons for the popularity of vaping products, which in June of 2019 accounted for between 15% to 30% of total adult use cannabis sales in California.

Vaping is a smokeless method of intake in which marijuana or marijuana extracts are vaporized and the vapor is then inhaled by the user. Because the materials are not combusted and the temperature is lower, it produces fewer carcinogens and is considered by some as a safer method of intake. Vaping products such as concentrates also tend to have much higher levels of THC than unprocessed marijuana flower, and provide a potent, more consistent dose.

Research has shown that “cannabis vapour is composed almost exclusively of cannabinoids with virtually no pyrolytic compounds,” it does not raise exhaled CO levels and that “vapourizers show promise for cannabis users who want to avoid pulmonary problems.”

That doesn’t mean there aren’t safety concerns with vaping however: by late January 2020, 60 people in the United States died and more than 2,700 people had been hospitalized due to e-cigarette, or vaping, product use associated lung injury, or “EVALI.”

The U.S. Food and Drug Administration has blamed EVALI injuries on illicit and poorly-produced THC vapes tainted with cutting ingredient vitamin E acetate. However, vitamin E acetate was not found in every vaporization cartridge associated with EVALI, so the jury is still out on other potential contributors. Concerns about shoddy vaporizer hardware and batteries and associated heavy metals have also been raised.

Another safety consideration is that vaporization temps can vary widely. A popular form of cannabis vaporization known as dabbing is often performed using a butane torch as a heat source. These high temperatures, despite not actually burning the cannabis concentrate, could lead to the production of potentially harmful toxins.

There was no evidence that vaping illnesses were related to vaporizing dry cannabis flower — only some oil extracts. Interestingly, some EVALI cases were associated only with nicotine vaporization and not thought to be cannabis related.

Smoking marijuana when you have an  underlying lung condition

And what about users who already have a respiratory condition, such as asthma?

Given that there are other potential formulations for cannabis, doctors generally recommend non-inhalation methods for those with any type of lung condition.

Nonetheless, cannabis has some bronchodilatory properties. This is notably different from tobacco, which is a known bronchoconstrictor and can trigger asthma attacks. It must be noted, however, that existing research performed on cannabis and asthma used strains with very low THC (1-2.6%), which could produce different effects than most cannabis on the market today, which tends to have a far higher amount of THC.

Patients with asthma should speak to their physician before smoking or vaping cannabis as a treatment. And when it comes to patients with more severe conditions like COPD, which includes emphysema and chronic bronchitis, the CDC states: “the most important part of treatment is smoking cessation.”

Inhaling any sort of cannabis into your throat, mouth, and lungs has health drawbacks that should be weighed against the benefits. Regardless of someone’s personal health history, cannabis users should keep in mind these health risks and consider other forms of cannabis intake as a change of pace, or a way to moderate their smoking.