Vaping vs Smoking: What’s the Difference? 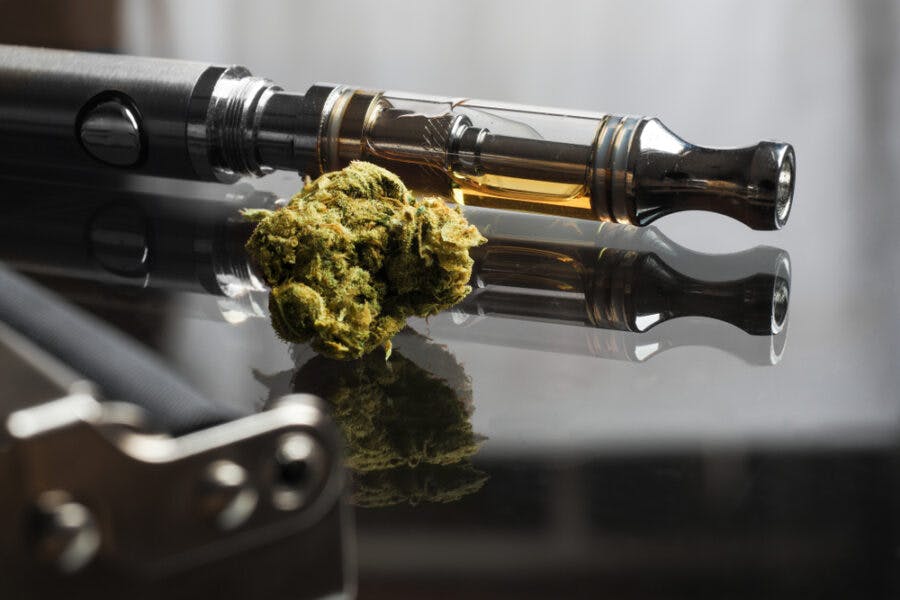 Vaporizers have become a popular way to consume medical cannabis in recent years. Many users prefer using vaporizers, commonly referred to as vaping, because it doesn’t leave lingering smells, is smoke-free, and can be more convenient.

Yet people have been smoking marijuana flowers for at least hundreds of years, and despite its drawbacks, old-fashioned smoking also has its benefits.

Vaping and smoking both involve drawing heated cannabinoids into one’s airways, but that’s where the similarities end. Depending on your particular health and lifestyle needs, either could be ideal for you.

The delivery methods one can use for smoking cannabis are pretty diverse. They include joints, pipes, bongs, bowls, and more. The most established and well-known of these mediums is probably the classic cannabis cigarette — or joint.

Cannabis cigarettes generally consist of flowers from the user’s strain of choice wrapped in a specially made rolling paper.

According to the World Health Organization, the average joint contains anywhere from 250-750 milligrams of cannabis. In some parts of the world, marijuana is often sprinkled onto tobacco inside a joint or cigarette.

Pipes are another delivery vessel that goes way back. Pipes have three major components: a receptacle to hold burning plant matter, a stem to hold, and a mouthpiece through which to inhale cannabis smoke. Many traditional cultures have their own trademark version of the pipe. In Morocco, for example, a narrow clay and hardwood pipe called a sebsi is most common.

It’s worth noting that pipes come in all shapes and sizes, the smallest of which is often colloquially referred to as a “one-hitter.” One-hitters may be ideal for patients who are new or especially sensitive to cannabis, as they often only hold one-tenth of a gram of marijuana (that’s 10-30 milligrams of active cannabinoids in most cases).

Many of the simpler pipes out there are called bowls, which refers to their marijuana -holding component. Medical marijuana users who partake in this fashion can be said to be “smoking a bowl.”

Think of the bong like a more sophisticated version of the pipe. This medium has a specialized water-filled chamber that the cannabis smoke travels through prior to inhalation, serving to cool down the smoke.

Many users report that this makes using a bong easier on the lungs than other smokable options.

Bongs may also have a detachable bowl that allows users to remove their cannabis from heat sources immediately post-draw. Out of all the smoke-friendly delivery vessels, the bong might just be the one that gives its user the most control over temperature.

Vaping is a way to heat up marijuana without actually burning it. Vaporization calls for a heat that releases cannabinoids and other compounds into the air, producing a vapor which is then inhaled.

Vaporizers usually come in the form of thin, pen-shaped devices. Tiny internal coils heat up a vape’s marijuana content to just the right temperature, at which point users can take a “draw” off the device and inhale its vapor.

For obvious reasons, the whole process is much more discreet than smoking. Many users also find vaping to be much gentler on the throat and lungs than smokable products are.

It’s worth noting that certain types of vapes are especially popular. In California, most cannabis is purchased in the form of concentrate — and most of this concentrate is vaped. Last year the amount of concentrate sold in the Golden State comprised 37% of total marijuana sales, as opposed to 33% of sales coming from cannabis flower, according to 2018 data from BDS analytics. Of that 37%, more than 70% of it is coming from vape-fueled purchases.

CBD-specific vapes are also rising in popularity. In Colorado, Oregon, and Washington, their sales grew 203% in the first 10 months of 2017 alone. It’s likely these trends towards vaping will only grow more pronounced with time.

Much of the available research says that CBD is more bioavailable when vaped than when taken through any other delivery method. The vaping advantage is there for THC, too, according to a double-blind, crossover study at Johns Hopkins University, which found that “vaporized cannabis produced greater pharmacodynamic effects and higher concentrations of THC in blood compared with equal doses of smoked cannabis.”

While more research in the area of vaping vs. smoking would be helpful, most of the available literature seems to say the same thing.

Pros, cons, and things to keep in mind

No method of cannabis consumption is perfect — but with a little research and trial and error, it’s possible to decide what’s best for you.

Despite the apparent health benefits of vaping, it seems like the most popular method in many areas is still smoking. That’s true in Canada, at least. Of all the Canadians who reported consuming marijuana in the first half of 2019, 77% reported smoking it while only 19% said they had used a vaporizer.

There’s something about smoking — perhaps its multisensory experience of fire, smoke, scents, and sounds — that remains attractive to many people.

Now for some less favorable news: the act of smoking cannabis comes with surprising levels of carcinogens. Users may be unwittingly exposed to tar, ammonia, benzopyrene, benzanthracene, and hydrogen cyanide. There’s also carbon dioxide. And while some studies hint that the anti-cancer qualities of cannabinoids may counterbalance the carcinogens that smoking them comes with — there is no concrete proof of this at this time, so perhaps it’s better to be on the safe side.

Here’s a practical plus to vaping: it’s discreet. Surprisingly enough, a study in the Journal of Substance Use and Misuse identified this quality as the primary motive for vaping, above even convenience or the vaping experience itself.

Most people who vape medical cannabis tend to view it as being safer than alternatives like smoking. They’re probably right. All else being equal, vaporizing a quality cannabis product won’t produce the carbon dioxide or harmful carcinogens that smoking will.

Then there’s the already-mentioned absorption advantage. Vaporized cannabis seems to shuttle more cannabinoids into the bloodstream and produce stronger effects than an equal amount of smoked produce.

While generally very safe, even vaping isn’t immune to risk. In fact, those who vape cannabis concentrates may be faced with bigger potential dangers than any other group.

As of late September 2019, over 500 people had become ill from what the American Center for Disease Control described as “lung injury associated with e-cigarette use, or vaping.” At least seven people have died.

Authorities have been unable to pinpoint the cause of the illness, with the CDC suggesting consumers refrain from using e-cigarettes until their investigation is complete, and the FDA warning Americans to stay away from THC vaporizers for the time being.

The message here is clear: be careful with dubiously-produced vape oils, especially if you live in an area where their THC-rich varieties are illegal. Those without access to high-quality, lab-verified vape oils can instead opt to smoke cannabis flower with a special herbal vaporizer. Of course, ensuring the quality of one’s cannabis flower is important, too.

With such pressing issues of quality in mind, what’s one to do?

The best solution is an obvious one: get your vape or smokable products from a reputable medical cannabis dispensary or trusted online retailer. Look for brands with transparency that have their lab results readily available both online and in-person. Patients may also consider selecting companies that have organic certification, FDA-approved facilities, or other certifications.

If one is seeking out clean, pure vape cartridges, a little extra care may be needed. Brands that exert full ownership over their entire supply chain — from seed to sale — will be able to have full confidence in the purity of their products. Brands that utilize in-house testing (in addition to third-party verification) may also have an easier time regulating each and every batch of products produced.

Obtaining a premium-quality cannabis flower is a bit easier. Not to say that lab reports and pesticide analysis shouldn’t be requested (they should), just that discerning impurities in cannabis flower will be exponentially easier to discern than those in a vaporizer cartridge.

Perhaps the best overall product is one that draws on elements from both smoking and vaping: the dry herb vaporizer. The most well-known of such devices are table-top machines, but handheld dry herb vapes are readily available today, too. These devices allow one to effectively get the best of both worlds, by vaping pure cannabis flower.  No solvents, oils, fillers, or emulsifiers needed — just a medical cannabis patient and their strain of choice.