Home Products Everything you need to know about the vaping illness

Everything you need to know about the vaping illness 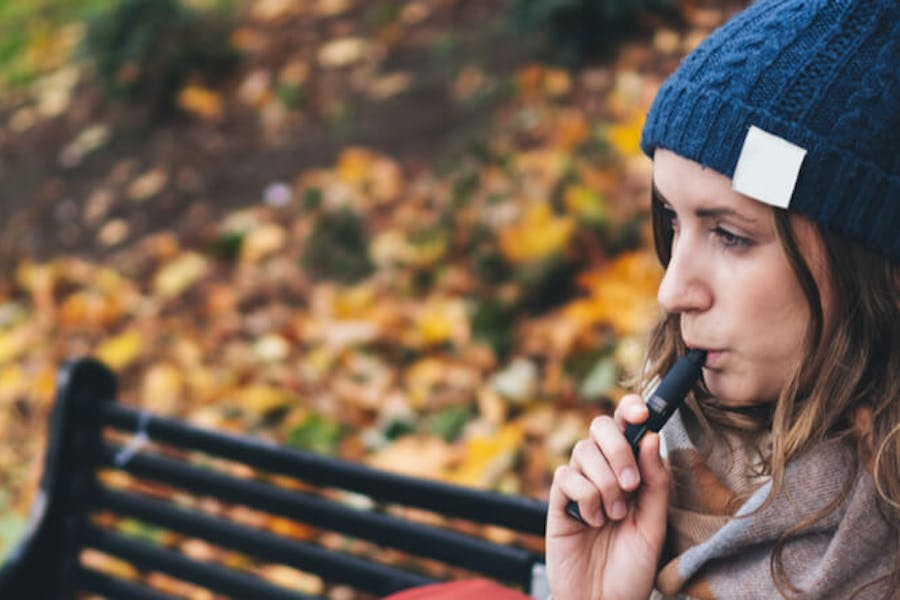 Vaping, or using a vaporizer to consume or administer cannabis, has grown rapidly in popularity for a variety of reasons, including ease of access, discretion, portability, and quick onset relief time. According to one study, one in five American cannabis users reported using vapes.

That has begun to change, however, with the outbreak of a mysterious, severe lung illness across the United States. Experts and health authorities have not been able to say exactly what is causing it, but each case has one thing in common: they are all somehow related to vaping.

The U.S. Centers for Disease Control and Prevention (CDC) reported that there have been 1,888 lung injury cases and 37 deaths associated with e-cigarette or vaping use as of October 29, 2019. The FDA has also launched a criminal investigation into the matter.

Both agencies are recommending that patients and consumers avoid vaping products, particularly those containing THC and those obtained off the street or illicitly, until the investigation is complete.

Vape sales have fallen across the United States as a result of the epidemic — by 15% nationwide, by one account. So what exactly do we know about the illness?

The CDC declared in a public statement that while all patients have a history of using vaping products, “no consistent evidence of an infectious cause has been discovered,” leading it to the conclusion that “the suspected cause is a chemical exposure.”

Medical researchers have also noted that lung tissue of a number of patients resembles chemical burns. “All 17 of our cases show a pattern of injury in the lung that looks like a toxic chemical exposure, a toxic chemical fume exposure, or a chemical burn injury,” Dr. Brandon T. Larsen, a surgical pathologist at the Mayo Clinic in Scottsdale, Arizona, told The New York Times.

Yet despite extensive testing on both federal and state levels no single product has been linked to all of these cases.

One compound, vitamin E acetate, an oil derived from vitamin E, has been mentioned in a range of reporting as a potential culprit. While naturally occurring, “its oil-like properties could be associated with the kinds of respiratory symptoms that many patients have reported: cough, shortness of breath and chest pain,” officials told The Washington Post. This compound was found in many of the samples obtained from victims in New York.

Health officials in Illinois and Wisconsin “provided the strongest clues so far into what might be making people sick,” according to The Washington Post. They interviewed 86 sick patients and “the vast majority reported using illicit THC-containing pre-filled vape cartridges, and bought them from informal sources.”

An ABC News report also noted that while some patients had vaped nicotine, many who have fallen ill-used THC oil cartridges purchased from pop-up shops and other illegal sellers.

That has led many to postulate that the spate of vaporizer-linked lung injury is being caused by THC products purchased from underground or unlicensed vendors. California is currently being considered the point of origin because many illegal vendors flourish there.

Until a cause is officially determined, the FDA suggests that consumers stop using e-cigarettes or vaping products containing THC, particularly vaping products “obtained off the street or from other illicit or social sources.” The agency further recommends that anyone who displays related symptoms (cough, shortness of breath, chest pain) to promptly seek medical attention if they’re concerned about their health.

The CDC echoes the sentiment, urging consumers to refrain from using e-cigarettes or vapes at this time. The CDC also warns consumers about purchasing unlicensed products, adding that consumers “should not modify or add any substances to these products that are not intended by the manufacturer.”

Origins of the vaping epidemic

What follows is the story of how this mysterious “vaping illness” came about, how regulatory agencies have responded, and the health findings the general public should know.

A 2010 study published in the International Journal of Environmental Research and Public Health concluded that airborne propylene glycol — one of the primary thinning agents used in vape pens — could potentially induce or exacerbate asthma, eczema, and other allergic symptoms.

An article on vape pen safety published a few years later on educational website Project CBD explained that propylene glycol, when heated, could transform into a group of cancer-causing chemicals called Carbonyls. Included in the Carbonyl family are compounds like formaldehyde, classified by the International Agency for Research on Cancer as a group 1 carcinogen.

Adding to the confusion was the fact that propylene glycol was classified by the FDA as GRAS or “generally recognized as safe” (GRAS) as a food additive”. The classification, however, was based on toxicity studies that did not involve heating or breathing the substance.

The Project CBD article urged caution, stating that, “there may be a hidden downside to vape pens, which are manufactured (typically in China), marketed, and utilized without regulatory controls…which at high temperatures can transform solvents, flavoring agents, and various vape oil additives into carcinogens and other dangerous toxins.”

As the industry continued to grow California began drafting more rigorous laws for toxin and pesticide testing for cannabis products. The new regulations came into effect in July 2019, and several cannabis vape brands pulled products off their shelves not long after they went into effect.

One of these was the California based Bloom Bland, which recalled cartridges on July 25, 2019, containing myclobutanil, a “popular fungicide banned for use on cannabis by the California Department of Pesticide Regulation.”

In late August, Leafly reported that “a new type of additive started showing up in late 2018, and has since become widely used in underground markets.” It added that the compound was odorless, tasteless and existed in legal and underground iterations, concluding.

“This new additive may or may not play a role in the current health crisis,” according to the Leafly report, “but it is one of the major new ingredients in illegal vape cart oil in widespread use this summer.”

The first signs of the vaping illness officially appeared in April, 2019. The Washington Post reported that while e-cigarettes had been sold for over a decade, state health departments in Washington and Illinois found that the outbreak began with 53 people in April.

Those afflicted reported a wide range of symptoms including shortness of breath, chest pain, coughing, nausea, vomiting, and fever. Many would end up with acute respiratory distress syndrome, a life-threatening condition caused by fluid build-up in the lungs. A third of patients would be put on respirators.

The illness “rapidly increased beginning in July,” according to a report by CNBC News. Concern over the role of propylene glycol in these illnesses prompted the FDA to propose adding propylene glycol to its list of “Harmful and Potentially Harmful Constituents in Tobacco Products” on August 5th.

The first death related to the vaping illness occurred in Illinois on August 23, 2019, according to the AP. It would appear next in Minnesota on September 6, but not before a Leafly report flagged several illegal underground brands as potential culprits. Two of these “illicit-market brands” included West Coast Carts and Dank Vapes, the latter of which would also be fingered in a report by VICE a few days later.

Health officials searched in vain for a potential common factor. In early September, it was reported that vitamin E acetate had been found in nearly all of the samples collected from patients in New York and elsewhere.

The same day, the FDA formally warned consumers to avoid vapes containing THC. However, the agency also cast doubt on the vitamin E acetate theory, stating that while it was actively testing “for the presence of a broad range of chemicals, including nicotine, THC and other cannabinoids along with cutting agents/diluents and other additives, pesticides, opioids, poisons, heavy metals and toxins,” that “no one substance was identified in all of the samples tested.”

In an attempt to curb the spread of the illness, health agencies began to take action. One of the first attempts was spearheaded in New York by governor Governor Andrew Cuomo, who directed his health department to subpoena three companies selling “thickening agents.”

President Trump would go on to propose a ban on flavored e-cigarettes a few days later. Many followed suit, including New York, which quickly became the first state to ban e-cigarettes. Similar proposals have been tabled in other states.

Over the coming days and weeks, more troubling reports emerged. One investigation in Hawaii found “potentially dangerous additions” in CBD products including “traces of fungus and bacteria.” One product even contained “an illegal amount of THC.”

The AP reported in mid-September that, “some operators are cashing in on the CBD craze by substituting cheap and illegal synthetic marijuana for natural CBD in vapes and edibles.” The AP had various CBD vape products tested and discovered that one-third “contained types of synthetic marijuana — drugs commonly known as K2 or spice that have no known medical benefits — while others had no CBD at all.”

An investigation by Leafly published in late September followed the journey of illegal vape cartridges from Shenzhen, China to ports in Los Angeles and into the underground market. It also detailed the ways in which underground manufacturers used unregulated and potentially toxic thinning agents like “Honey Cut” “to cut THC oil concentrations by 50% to 70% without consumers noticing.”

Ten of the unregulated cartridges were tested by NBC for pesticides, with all 10 coming back positive. “The products all contained myclobutanil, a fungicide that can transform into hydrogen cyanide when burned,” according to the report.

Los Angeles has since tried to combat the spread of these cartridges, announcing a potential one year ban on the sale of vapes. Oregon recently announced a total ban on flavored e-cigarette/vaping products.

A VICE published an article the same day, titled “The Vaping Crisis Has a New Villain: ‘Dank Vapes,” that outed black-market THC cartridges as “a potential culprit behind the illnesses.”

How to Stay Safe

While no one compound or agent has been found to be behind these illnesses, it does appear that most cases are connected to underground cannabis cartridges. The FDA has warned consumers to avoid vapes containing THC as well as Vitamin E acetate, stating,

“Because consumers cannot be sure whether any THC vaping products may contain Vitamin E acetate, consumers are urged to avoid buying vaping products on the street, and to refrain from using THC oil or modifying/adding any substances to products purchased in stores. Additionally, no youth should be using any vaping product, regardless of the substance.”

The most practical solution, however, ultimately lies in the hands of legislators and regulatory agencies like the FDA. Project CBD, for its part, implored state health officials to “implement a rigorous regulatory program that prioritizes public health and raises the safety standards for all edibles and food supplements.”

Janelle is a journalist, artist, and cannabidiol (CBD) expert. Her works have appeared in publications including Thrillist, Rolling Stone, BBC, and...