Home Treatment What Is the Entourage Effect?

Home > Treatment > What Is the Entourage Effect?

What Is the Entourage Effect? 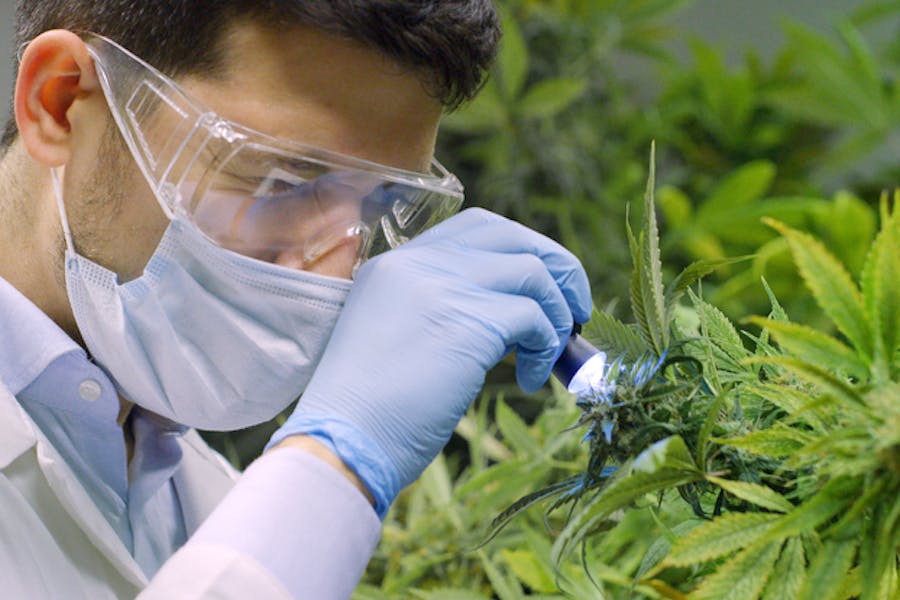 Why do whole plant cannabis extracts appear to be more effective for our health than isolated THC and CBD?

Most of us are used to taking synthetic white pills containing single molecules for our malaises, so the idea that a botanical extract containing hundreds of compounds works better can be hard to believe. Yet the entourage effect, the name scientists have given to the synergistic relationship between all or many of the molecules in cannabis, helps explain why cannabis, in all its botanical glory, is best.

Preparations made from cannabis have been used by doctors and in folk medicine for thousands of years. Back then, no one questioned the plant’s molecular makeup. However, with the discovery of the primary cannabinoids — tetrahydrocannabinol (THC) and cannabidiol (CBD) — a greater understanding of the cannabis plant began to develop.

Nowadays, there are believed to be 144 cannabinoids (and counting). There are THC and CBD acidic precursors THCA and CBDA, cannabigerolic acid (CBGA) — the parent molecule from which other cannabinoids are synthesised. There is cannabinol (CBN), a mildly psychoactive cannabinoid found in aged cannabis. Tetrahydrocannabivarin (THCV), a homologue of THC thought to suppress appetite. Cannabidivarin (CBDV) which may have anti-seizure activity. Of the 130 or so other cannabinoids present, further research is required to fully understand how they affect the body.

Next in the medley of molecules found in cannabis, come the 150 or so terpenes providing the plant’s distinctive aromatic tones. Terpenes aren’t just found in cannabis. Take any aromatic plant, or even fruits and vegetables, and you will find many of the same terpenes in cannabis. Limonene, for instance, is abundant in citrus fruit, pinene in pine trees, linalool in lavender, and beta caryophyllene in black pepper.

In nature, terpenes act to repel insects, but in humans, their effects are often medicinal. At concentrations of 0.05% they are considered “of pharmacological interest,” interacting with cell membranes, neuronal and muscle ion channels, neurotransmitter receptors, G‐protein coupled receptors, and enzymes.

Studies have shown limonene for example to have anti-anxiety effects, pinene to be antibiotic, linalool both anaesthetic and anticonvulsant, and beta caryophyllene, a powerful anti-inflammatory agent. Then there’s relaxing myrcene, thought to be the main contributing factor differentiating sativa and indica strains of cannabis.

And let’s not forget flavonoids, the secondary polyphenolic metabolites giving the yellow pigment in plants. Flavonoids can be antioxidant and antibiotic, and in some cases are even anti-tumoral.

When one considers that a single plant contains hundreds of potentially therapeutic molecules, it’s easy to see why scientists are so excited about isolating and using them as the basis for a whole array of future medicines. Indeed, it’s the most logical way for researchers to really understand the cannabis plant. They need to know which cannabis constituents are responsible for the wide variety of medicinal effects in order to study their mechanisms of action in the body.

Some such medications are available these days, primarily purified cannabinoid-based medications (Epidiolex), combinations of molecules (Sativex), or synthetics (Marinol).

Interestingly, many patients say they have better results from cannabis products containing the full gamut of molecular ingredients. One meta-analysis comparing isolated and whole plant CBD as a treatment for epilepsy found that whole plant CBD was not only twice as effective as its isolated equivalent, but that lower doses were needed to achieve a therapeutic effect. And it would seem the entourage effect can take much of the credit.

Entourage effect begins with the ECS

It seems right and fitting that the entourage effect finds its origins in the body’s endocannabinoid system (ECS) — our internal body system that processes, creates, and breaks down cannabinoids. While these are the commonly stated key players in the ECS, Israeli scientist Shimon Ben-Shabat noticed how some closely related metabolites increased the activity of the primary endocannabinoids; thus coining the phrase “the entourage effect.”

However, it was Dr Ethan Russo, a neurologist and psychopharmacology researcher, who extended the term to cannabis. In his paper, “Taming THC: Potential cannabis synergy and phytocannabinoid-terpenoid entourage effects,” he proposed a “herbal synergy” between the lesser studied but potentially biologically active compounds in the cannabis plant, similar to that found in the endocannabinoid system.

In basic terms, we can consider the entourage effect as being like a cast of actors in a theater production. THC and CBD are the protagonists, while the rest of the cannabinoids, terpenes, and others, are the supporting cast. Sure, the main actors are impressive, but without the rest of the cast, costume designers, makeup artists, and others, there would be no play.

This theory goes beyond the previous scientific consensus that combining THC and CBD produces superior therapeutic effects, while allowing for a greater therapeutic window for the often ill-tolerated THC.

Synergy between cannabinoids and terpenes

Another key component of the entourage effect is the synergy between cannabinoids and terpenes.

The hundreds of terpenes present in cannabis — such as linalool, limonene, and pinene — have unique therapeutic effects that are helpful by themselves and alter the effects of cannabinoids.

One notable example is the terpene myrcene, which improves the passage of compounds across the blood-brain barrier. Thanks to this, myrcene can make it easier for cannabinoids to enter the brain, making them more effective. In addition, myrcene has sedating properties that can aid the sleep-inducing effects of cannabis.

Meanwhile, the terpene limonene has shown anti-inflammatory, anti-anxiety, and anti-stress properties that can add on to the effects of CBD and other cannabinoids.

However, these examples are just scratching the surface, and the interaction of terpenes and cannabinoids represents the next great frontier of cannabis research.

While the concept of the entourage effect would appear to explain what is experienced in practice by medical cannabis patients, only now are researchers beginning to find hard evidence to explain the phenomenon.

They found the whole plant cannabis extract displayed superior anti-tumoral action compared to isolated THC in all three types of breast cancer studied. In order to find out whether terpenes were responsible, they added in a “cocktail” to the isolated THC, identical to the terpenes found in the full spectrum extract. Interestingly, this did not alter the anti-tumoral activity. Instead, they suggest any changes may be due to low concentrations of CBG and THCA.

Mary Biles is an ex-TV producer, writer, and educator with a background in holistic health. She’s written for the Huffington Post, CNN, the BBC, an...