It’s a tale that’s equal parts spy novel and urban legend — a covert government lab, a top secret experiment, and an inside man who smuggled the contraband out into the daylight. However G13 came to be, this indica-dominant hybrid strain is known for producing a strong, relaxing, and euphoric high and for its skunky fragrance and sweet pine flavor.

(We can neither confirm nor deny its origin story.) 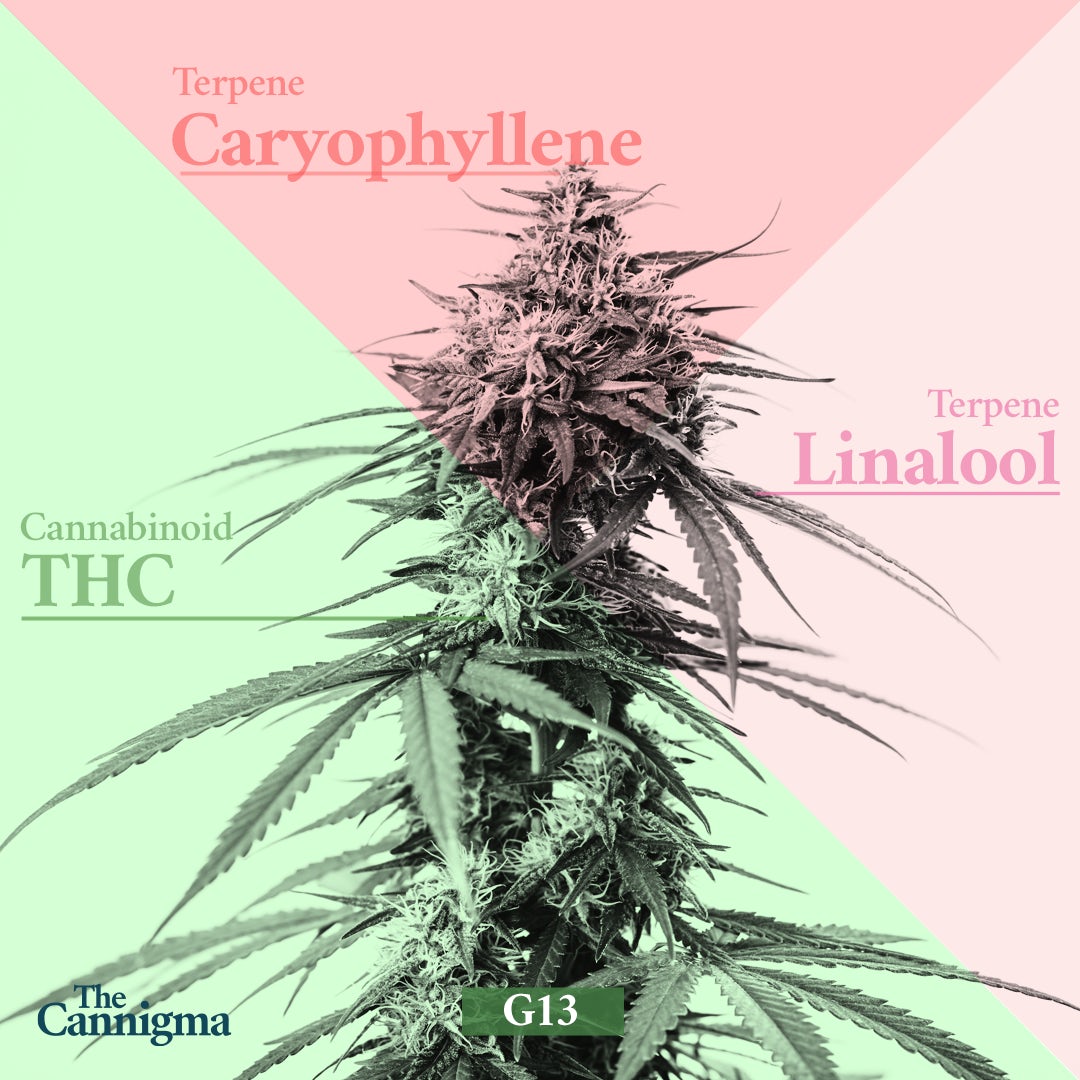 Mystery, intrigue, and marijuana smoke surround the origin story of G13. It was supposedly first created in a top-secret, secure US government cannabis research facility in the 1970s, where according to Cannabis Pharmacy, it reached THC levels of more than 29%. That’s pretty high for 2020, but for the 1970s? That would have put it in a different league than the rest of the cannabis on the streets back then — if not a different sport altogether.

According to the legend, the strain was grown at the US government-run research facility at the University of Mississippi, where legend has it, one researcher with an outlaw streak managed to spirit out a cutting, which was given to legendary Dutch breeder Nevil Schoenmakers who spread it to the wider cannabis world.

The strain’s legend grew with a new generation due to the 1999 film American Beauty, during which a high school dealer sells marijuana to his next door neighbour played by Kevin Spacey for the other-worldly price of $2,000 per ounce — in 1999 money. The dealer, Lester, describes the herb as “G13, it’s genetically engineered by the US government, it’s extremely potent but a completely mellow high, no paranoia.”

Ultimately, the origin legend of G13 is almost too good to fact check, though recent reports about the poor quality of government-grown weed may cast doubt on this Hollywood tale. Nevertheless, the strain became so popular that the SweetWater brewery made a an IPA beer after it- “420 Strain G13”.

Cannabinoids and terpenes in G-13

While the masses might disagree, it’s virtually impossible to predict what effect a strain can have on you merely from its sativa, indica or hybrid origins. And indeed, the chemical profiles of a multitude of flowers harvested from different plants that are all supposedly the same strain can differ wildly. Growers can basically call their products by whatever name they want. For this reason, it’s very difficult to say for sure what the levels of THC, CBD or CBG are in G-13. In the lab results we compiled for G-13, for example, we found THC levels ranging from 10% to 29% — a significant range.

Nevertheless, we put together this report on G13’s chemical profile from a database of third party certificates of analysis, seed banks and marijuana websites such as Wikileaf, Leafly and ILGM.

These numbers can give you an estimation of what you could expect to find in the G13 chemovar, but your best bet is always going to be looking for a certificate of analysis before you choose a cannabis product — this way you’ll know for sure what’s in it.

Pinene 0.28%
* The numbers in the tables are averages of data from multiple resources
** Terpenes are of pharmacologic interest at concentrations above 0.05%

How G-13 affects you

Maybe American Beauty was right? G13 can have high levels of THC, but like many indica-dominant strains it is thought to create the sort of pleasant, relaxing and happy high that could help you pass the time on the couch, even if that couch is deep inside a government facility under a ceiling of fluorescent lights.

According to user reviews from different cannabis websites, G13 provides a calming tranquil body high that can make it effective for dealing with stress or depression. The powerful high it produces can also be helpful for treating pain, and for people who have trouble sleeping, a dose before bedtime can make a real difference. According to Cannabis Pharmacy, it’s particularly popular among migraine patients.

G13 can cause a dry mouth and headache, so make sure to stay hydrated. If you smoke a large amount you may also feel a bit dizzy. It can potentially cause anxiety or paranoia in those who are prone to such effects. Though, like dizziness or other adverse effects, this may be related to the amount ingested, so consume responsibly.

G13 is a strong, durable strain that can withstand pretty high temperatures (around 85 degrees) and inclimate weather, making it a solid choice for outdoor growing. That said, because it can grow quite high, an outdoor grow might not be the most low-profile option.

G13 is moderately difficult to grow and does well both indoors and outdoors. It requires heavy feeding so make sure to provide a rich diet of nutrients, in particular nitrogen during the vegetative stage.

One thing to keep in mind is this is a strain  that grows tall and needs a lot of space to stretch out, so plan accordingly. Also make sure to provide enough airflow between the plants to keep humidity in check.

It can produce a relatively high yield of around 1.9 ounces of dense, dark green buds per square foot  when grown indoors, and yields of around 40 ounces per plant are doable with outdoor grows.

According to Leafly, two of G13’s direct descendants are Valley Ghash and Tangerine G13. G13 can have similar effects to other indica-dominant strains like Skywalker OG or Cookie Monster. Strains like G13 Haze and Amnesia G13 can be reliable stand-ins for G13 as well.