A cannabis world favorite for almost three decades, Sensi Star is an award-winning, indica-dominant strain known for its powerful aroma, citrusy taste, and ability to wrap you up in its warm and fuzzy couchlock embrace. 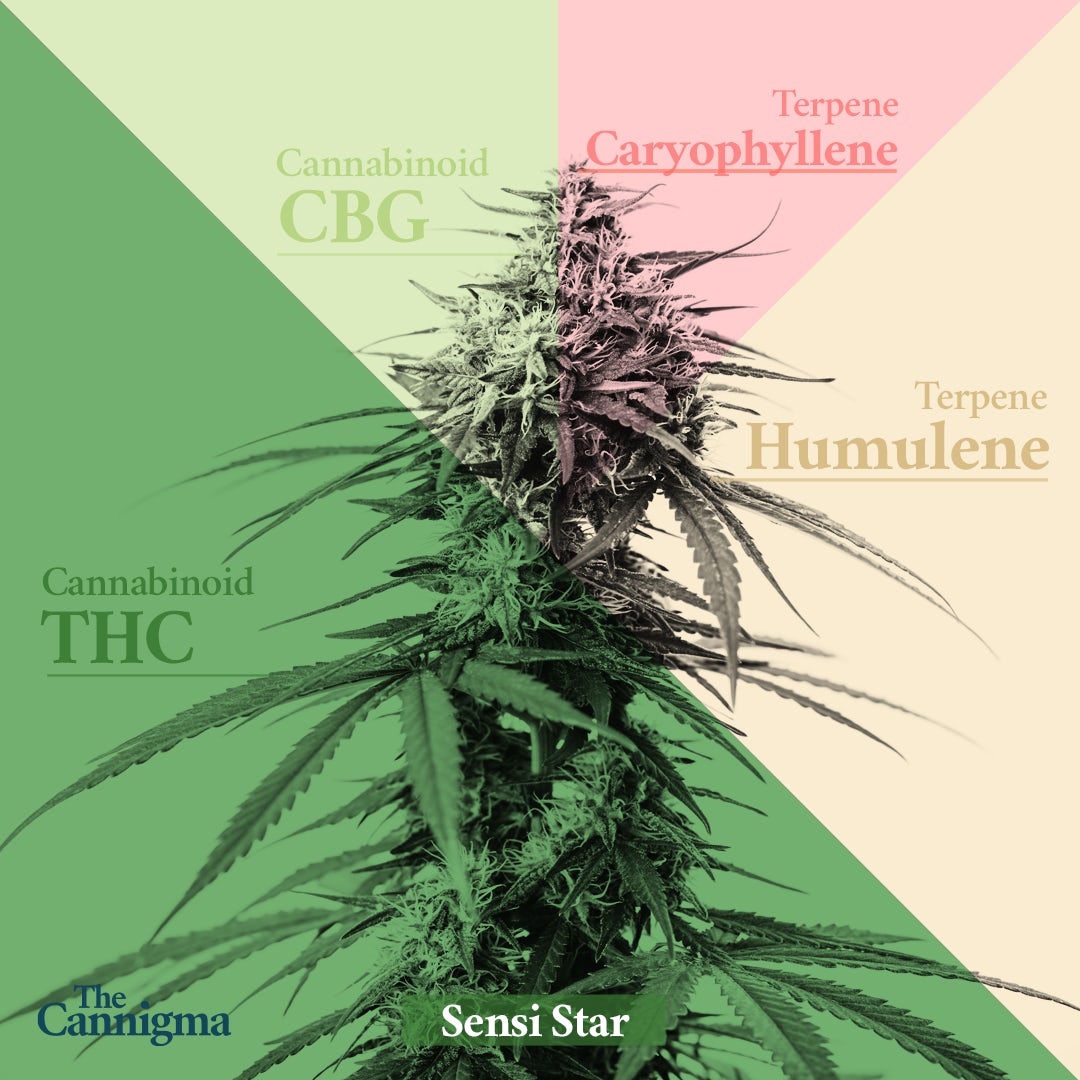 Cannabis Pharmacy traces the lineage of Sensi Star back to Luc Krol, the founder of Paradise Seeds, who it says developed the seed in the early 1990s. In the years to come it became a fan favorite among cannabis enthusiasts, and won acclaim as one of the finest indica strains available.

According to Paradise Seeds, the strain put the company on the map by winning repeated cannabis contests after it first hit the scene in 1995. The company describes its star-making strain as “the strongest indica you will ever encounter,” which “appeals to old school and new schoolers alike and has become well known among medical users in recent years for its super relaxation powers.”

Leafly describes Sensi Star as “a legendary indica strain” that produces buds that are covered in crystal trichomes that “sparkle like a constellation of stars,” and has won the hearts not only of cannabis smokers and growers alike.

Cannabinoids and terpenes in Sensi Star

Cannabis varieties like Sensi Star are often referred to as strains or cultivars, but in fact the most accurate term would be “chemovars.” Strain refers to bacteria and viruses, and cultivars is an abbreviation of “cultivated variety,” one that has been intentionally created or selected and maintained by cultivation.

Talking about the chemical profile of a given cannabis variety can be tricky. There’s no standard definition for any strain from a chemical perspective. In theory any grower can cultivate any strain of cannabis with any kind of chemical profile, and name it however they wish. So it’s difficult to definitively state the THC, CBD or CBG content of Sensi Star.

For this report, we gathered Sensi Star’s chemical profile from a variety of third party certificates of analysis, seed banks and marijuana websites such as Wikileaf, Leafly and ILGM.
The following numbers can give you an estimation of what you could expect to find in the Sensi Star chemovar, but your best bet is always going to be looking for a certificate of analysis before you choose a cannabis product — this way you’ll know for sure what’s in it.

Myrcene 0.1%
* The numbers in the tables are averages of data from multiple resources
** Terpenes are of pharmacologic interest at concentrations above 0.05%

From the reports we found about the cannabinoids Sensi Star:

As for the terpenes in Sensi Star:

How Sensi Star affects you

The long-lasting body effects of Sensi Star can make it an effective strain for pain relief. The tranquilizing high can also ease stress and quiet the wheels of depression. And with this kind of reported sedation, it can be a helpful strain for people who are coping with insomnia.

Ultimately though, the effects of any strain can differ from one person to the next.

Sensi Star is a favorite of growers because of its high yield (14 oz/ plant according to ILGM) and the ease of growing it both indoors and outdoors.

It is a very hardy strain that does especially well outdoors, though you’ll want to keep it sheltered from rain. Outdoors it can grow large, rock hard buds that are covered with resin, earning it the strain’s nickname “white strain” according to Sensi Seeds. The strain prefers warm, dry climates with temperatures of around 68 to 80 degrees.

According to Leafly, the plant grows to a height of up to 78 inches, which makes it well suited to indoor grows. One thing to keep in mind is that this straint can be “an extremely smelly plant” according to Cannabis Pharmacy, so it may be hard to keep things discreet.

The plant should flower in 8-9 weeks, and yields of around 14 ounces per plant for an outdoor grow, or 1/sqf for an indoor grow should be expected.

Similar varieties according to the book Cannabis Pharmacy, are S.A.G.E, and White Widow. And according to Leafly, two of sensi star’s descendants are Gold Star and Rockstar Master Kush