What if you could taste the rainbow without ever getting up off your couch? The aptly named Zkittlez strain (aka “Skittles,” and “Skittlz”) is a potent indica-dominant strain that tastes like fruity candy and leaves you feeling happy and relaxed, coasting down a rainbow into your own pot of gold. Now while you may have gotten high and had some Skittles, this strain is for when you’re looking to do things in the opposite order. It has earned a spot at the top of the cannabis world, due to its flavor, aroma, and the high that makes it sweeter than candy. 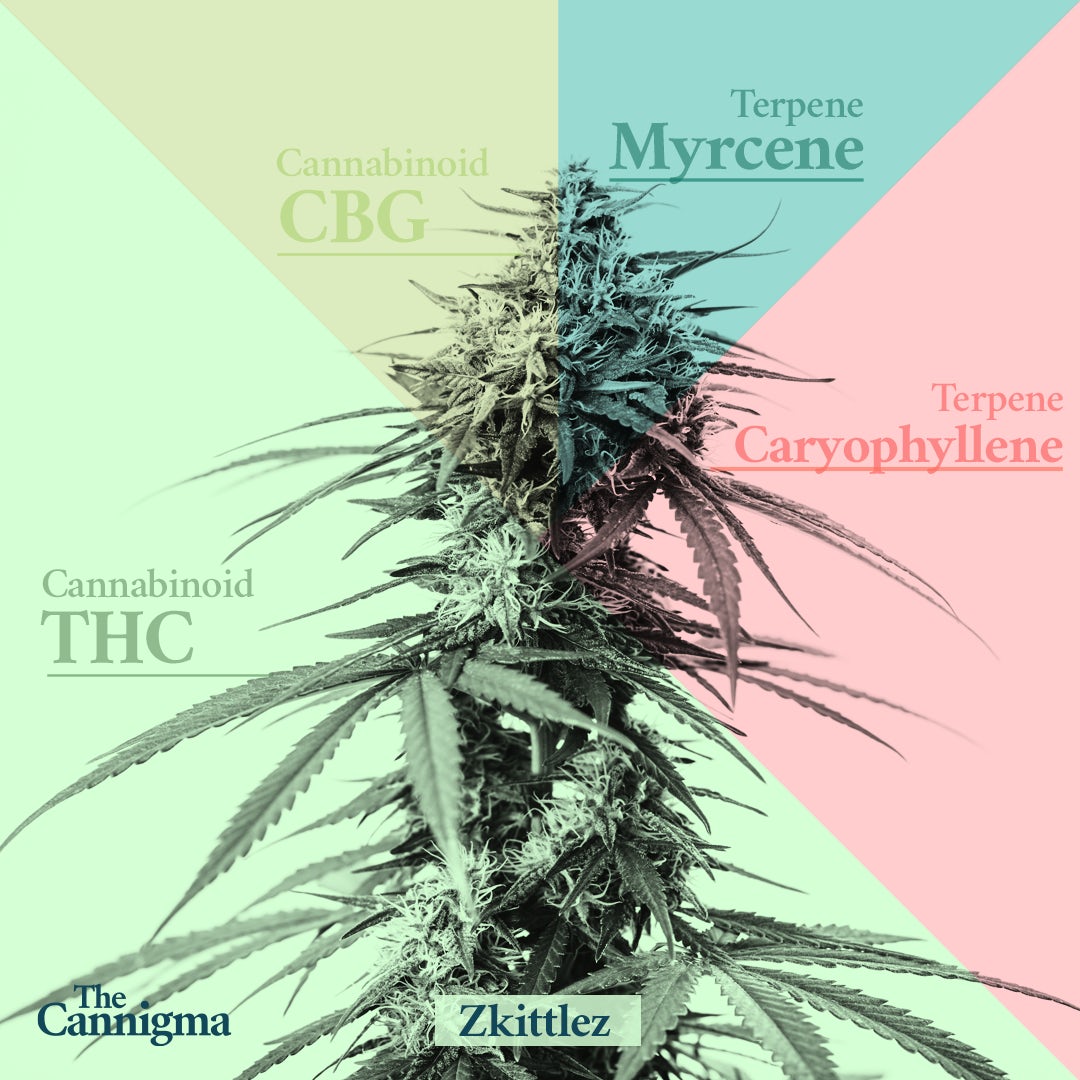 This cannabis flavor sensation was birthed by the growers at 3rd Gen Family and TerpHogz, LLC. The latter has since rebranded itself as Zkittlez™, because when you’ve crafted a blockbuster weed strain, why not lead with that?

In a press release from August, 2020, Jon Orantes, managing director of Zkittlez™ spoke about the company’s new joint venture with Halo Labs, saying it would help them “reach more of the market with our products and bring the Zkittlez movement to the next level!” This excitement was also found in an earlier press release, in which Terphogz’s CEO Green R. Fieldz said they were “extremely excited” to find a collaboration with their “award-winning genetics.” The press release also stated that due to its popularity, Zkittlez has a price premium of 20% or higher compared to other strains. (The strain has also been credited to grower Shiloh Massive of Dying Breed Seeds in Mendocino, California, which is partnered with 3rd Gen Family.)

But what are those awards, and how can a single weed strain help a group of growers garner a major cannabis marketing, cultivation, and distribution agreement? And why is it spelled Zkittlez? (actually, that one’s easy — so they don’t get sued by Wrigley)

Along with that fruity flavor, Zkittlez is also known for its colorful buds which have a wide range of colors including purple, orange, and light green. The high itself is described as very chill but not too couch-locky, a nice way to wind down without getting too zonked out. The THC level isn’t as high as many of the marquee weed strains out there, but it still feels just right, and besides, this is a strain for people who put a lot of emphasis on the flavor and aroma of their herb.

The strain is described as a cross of Grape Ape and Grapefruit, and a third, mystery strain. Grape Ape is a relaxing, indica-dominant strain known for its (surprise) grape flavor, while Grapefruit is an upbeat sativa with a strong citrus smell and grapefruit flavor. Put them together, and it’s probably no surprise you have a strain that evokes a bag of candies.

In a 2018 article, Brandon Scott Parker of 3rd Gen Family wrote an ode to Zkittlez, in which he said “Zkittlez is going to be amongst the Holy Grail. Zkittlez is undeniably and unexplainably different from anything else out there. The palate when you smoke it, everything.”

And about that third parent strain? In a 2020 interview, Brandon said that Zkittlez became pregnant by an unknown strain while growing indoors and that “I saw it had some seeds in it. We never really found out what dropped balls because there was no male.”

It’s only been around for a few years, but so far, Brandon is right — in a world of hyped-up weed strains, there is something especially sweet about Zkittlez.

Cannabinoids and terpenes in Zkittlez

The chemical profile you see below is an average of laboratory tests for products called “Zkittlez” — so it’s just an estimate of what you might find when you buy Zkittlez weed.

Pinene 0.16%
* The numbers in the tables are averages of data from multiple resources
** Terpenes are of pharmacologic interest at concentrations above 0.05%

How Zkittlez affects you

Leafly Zkittlez reviewers mostly report this strain as producing relaxation, happiness and euphoria, and sometimes causing dry mouth and dry eyes. But really, marijuana affects people in different ways. The two main factors are your own biology (your endocannabinoid system, metabolism, age, weight, etc), and the product you choose (including its cannabinoid profile and terpene breakdown, and the delivery method used).

Zkittlez is considered an easy-to-grow strain that doesn’t require a ton of maintenance or expertise. It prefers a warm, sunny, and dry climate, and can thrive both indoors and outdoors.

It has a relatively short flowering time of between 7-10 weeks, and produces a nice sized harvest — around 16-17 ounces or more per plant if grown outside.

In the past, people have had difficulties finding Zkittlez seeds online, but today there is a fair number of companies that sell them both regular and autoflowering, and you shouldn’t have any problem scoring your own.

Zkittlez shares common attributes with both of its main parent strains. Like Grape Ape, it has a relaxing high and a strong, fruity flavor and aroma, and like Grapefruit, it has a citrusy flavor and aroma and a lively high that combines with Grape Ape to create a well-balanced experience.

Due to its popularity and notable flavor and aroma profiles, it’s no surprise that Zkittlez has itself become a parent strain. 3rd Gen Family have used it to breed the strain “Rozé,” which has started to gain a reputation in its own right – as well as a 2nd place finish in the 2017 Emerald Cup. Named for its slight rose water aroma, Roze was the result of a meticulous breeding process using Zkittlez, and in that same 2020 article its parentage is referred to as “Zkittlez + Mystery Hermaphrodite.”

Ask the Expert Can I substitute coconut oil for vegetable oil in weed gummies?
Previous Article Berry White Next Article Afgoo
The Cannigma uses cookies to improve your experience and to show you personalized adsACCEPTPrivacy Policy
Manage consent