Sticky and stoney, Afgoo is a strain whose name sounds like how you may feel after smoking this indica-dominant hybrid. Also known as Afgooey, this strain is rich and earthy and draws on its Afghani parentage to provide a dreamy, relaxing high that runs across the whole body. But what makes Afgoo such an interesting strain? It’s time to get gooey. 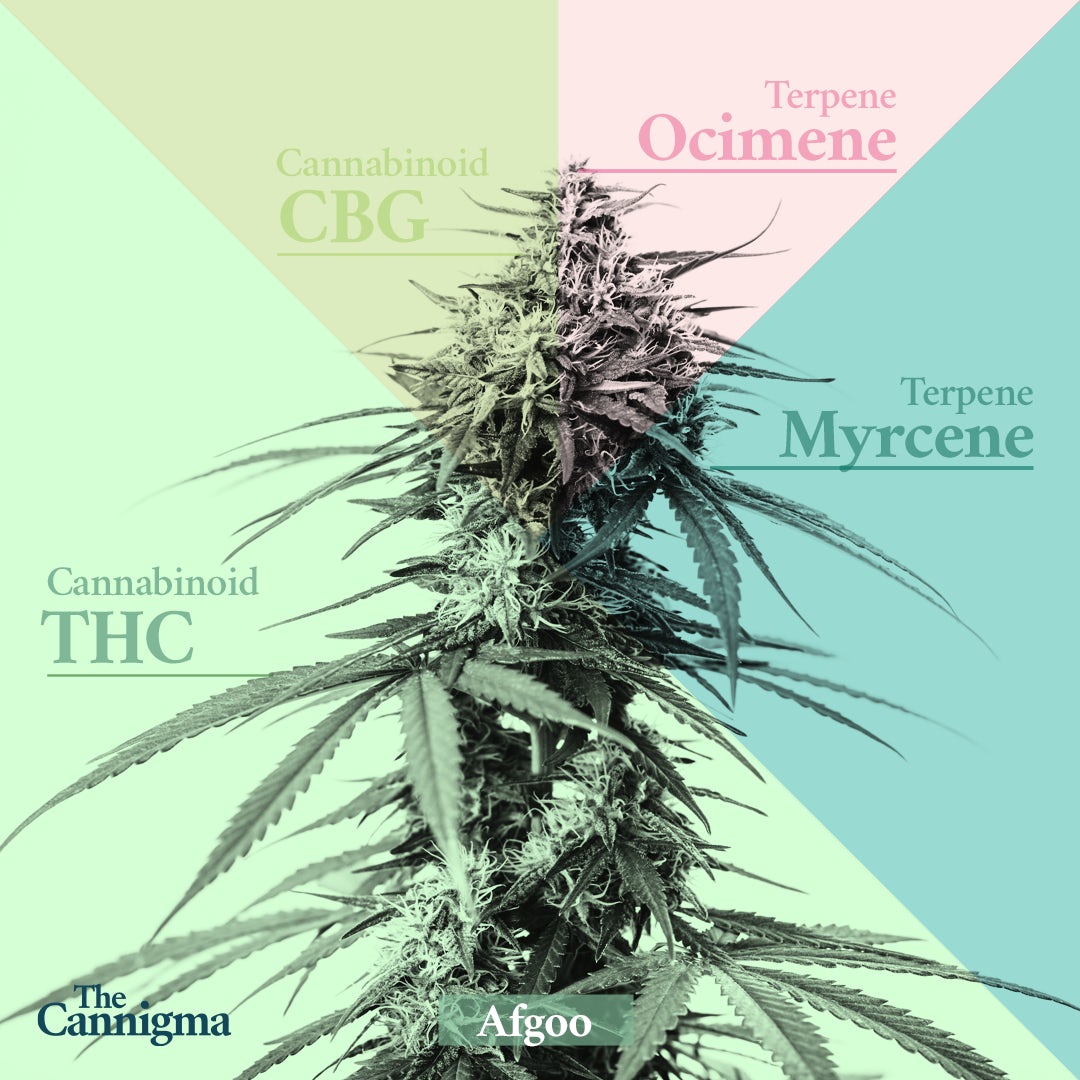 The Afgoo strain has reportedly been around since at least the 1980s, and it is frequently credited to the famed growers at Green House Seeds in Amsterdam, who also operate the Strain Hunters Seedbank.

On the seedbank’s website, Afgooey is cited as a cross of Afghan and Maui Haze and “a famous cut from Northern California.”

Strain Hunters says that “the Afgooey is very stoned, with a cerebral effect that I can define as confusing, heady, almost chaotic. It hits fast, and lasts long.”

But what about the gooey flavor? Strain Hunters says it “reminds of old-school afghan, with a fruity twist. It is earthy at first, but evolves into a sweeter, fruitier experience, with notes of orange, lemon and tropical fruits.”

Afgooey buds are dense, compact, and pear-shaped, with medium to the large calyx, according to Strain Hunters. It is also known for being a highly-resinous plant, which is one explanation for the gooey name.

By and large, Afgoo is described by writers and users as an old school strain that has stood the test of time, a strain whose potency matches up with today’s strains, and which has a flavor and aroma that sticks with you. Not to mention that stoney, cerebral, and long-lasting dreamy high.

Cannabinoids and terpenes in Afgoo

The chemical profile you see below is an average of laboratory tests for products called “Afgoo”— so it’s just an estimate of what you might find when you buy an Afgoo strain. It consists of relatively high THC (average of 17%) and a modest amount of CBG (0.7%), very high myrcene levels (1.3%) and modest amounts of ocimene (0.15%) and BCP (0.12%).

Humulene 0.05%
* The numbers in the tables are averages of data from multiple resources
** Terpenes are of pharmacologic interest at concentrations above 0.05%

How Afgoo affects you

Based on user reports, Afgoo some of the common effects of Afgoo are relaxation, sleepiness, happiness and euphoria.  And could cause dry mouth, dry eyes, and dizziness. But really, marijuana affects people in different ways. The two main factors are your own biology (your endocannabinoid system, metabolism, age, weight, etc). and the product you choose (including its cannabinoid profile and terpene breakdown, and the delivery method used).

If anybody has some good advice about growing Afgoo it’s probably the guys at Strain Hunters. They refer to the strain as having an 8 weeks flowering time both indoors and out, and say that if grown outdoors, you can harvest more than 1 kilogram (2.2 pounds) of dried, manicured buds.

The plant grows short and is easy to fit in a confined space. Don’t let that fool you though — Afgooey has a very — very — generous yield of more than 2 pounds per plant if grown outdoors. Make sure you have a well-ventilated grow spot or cool neighbors if you grow outside — this is a pungent strain.

Afgoo prefers a sunny and warm climate, and it’s considered a relatively easy strain to grow.

The Afgoo parent strain Afghan/Afghani is a strong indica that has had a giant impact on the wider cannabis world and the genetics of an untold number of strains. Like Afgoo, it can provide a deeply relaxing and stoney high that envelops the smoker, and is a great nighttime strain.  The other parent, Maui Haze, is a potent indica-dominant hybrid with dense, dark buds that can bring on an energetic and lively high. Put these two strains together and you can see what makes Afgoo so special.

Afgoo has been used to breed a number of strains as well, including Afcrack/Grand Hustle (a cross with Green Crack), the wonderfully-named Gilbert Gottfried (a cross with Purple Wreck and Banana Split), Dream Beaver (a mix with Blockhead and Appalachia), and Mother Tongue (a cross with Watermelon OG and JOG Kush), to name just a few. There is also the strain Mendo Afgoo, though its exact parentage is not known.

Whichever Afgoo-derived strain you try, it’s quite likely to share some of those same stoney attributes that make Afgoo so memorable.

Ask the Expert Can I substitute coconut oil for vegetable oil in weed gummies?
Previous Article Zkittlez Next Article Candyland
The Cannigma uses cookies to improve your experience and to show you personalized adsACCEPTPrivacy Policy
Manage consent