Home Recipes How to make cannabis oil for cooking and edibles

How to make cannabis oil for cooking and edibles 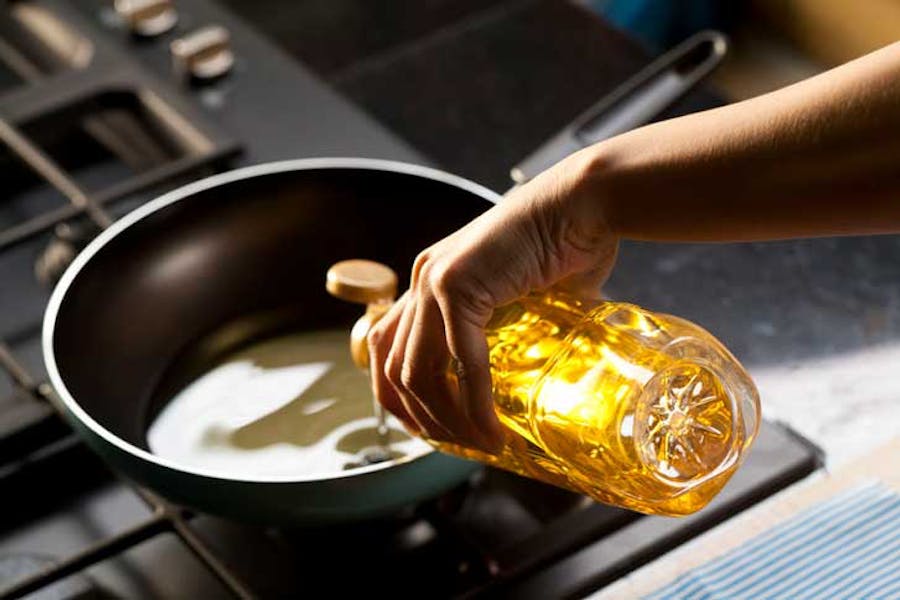 Pouring oil into a pot for making cannabis oil for edibles. (benaung/123rf)

Cannabis edibles have exploded in popularity in recent years, both due to the powerful, full-body sensation they produce, and the fact that they can be consumed easily and discreetly, without any need to smoke anything.

When making your own cannabis edibles at home, having your own infused cannabis oil on hand is a perfect shortcut, a cheat code that takes out all the guesswork and makes every edible recipe a cinch.

➤ Go straight to the recipe

The reason to make your own batch of THC infused oil is that you can break it out in the kitchen anytime you want to quickly add some magic to a dish. With cannabis-infused olive oil or coconut oil, you can always just pull the bottle off the shelf and drizzle it on a salad or use it to fry up some steak and eggs, helping make any meal a special occasion with no fuss.

The possibilities are endless — cannabis cooking oil can be easily mixed into a batch of marijuana ice cream for when you really need to chill out, or use it to whip up a batch of spicy chipotle aioli to put on some burgers you just grilled out on the back patio.

Why marijuana edibles need a fat

THC and CBD are fat-soluble, meaning that when making edibles they need to be consumed in fat in order to be broken down by the body. The oil used during the infusion process absorbs the THC and a wealth of other cannabinoids, terpenes, and flavonoids, creating a potent fat that can be used later for cooking.

Because these cannabinoids are fat-soluble, they bond to the body’s fatty tissues, which is unfortunately the reason why cannabis users can fail a drug test even a month later.

But we aren’t out of the woods yet. You can’t merely dump your weed into a vat of hot oil, stir it a few times and call it a day. The cannabis must first go through a process called decarboxylation for it to have its desired effects.

Decarboxylation is a reaction that activates compounds in cannabis — most notably, THC — which through decarboxylation transforms from the non-psychotropic THCA to the THC that we all know and love.

The main way to decarboxylate cannabis is through heat, which occurs instantly when cannabis is smoked. Typically, cannabis starts to carboxylate at around 220-245°F (105-120°C), and it needs at least 30 minutes at this temperature to complete the chemical transformation. If you heat it at a slightly lower temperature for a longer period of time, however, you may actually preserve more of the terpenes in the cannabis.

Decarboxylating can be done by placing broken up cannabis flower on a pan in the oven, baking it at a low heat and then mixing it into the oil and letting it cook at a low temperature to infuse into the oil. You can also decarboxylate during the infusion process, by combining it with the oil while heating it, though this should take much longer than infusing with already decarboxylated cannabis.

There are three main methods of infusing oil or fat with cannabis: saucepan, double boiler, or slow cooker. The saucepan method may be the most straightforward method, and involves heating the oil and the decarboxylated cannabis in a saucepan at the right temperature around 130-150°F (55-65°C) for about 1-3 hours. If you’re using a saucepan, make sure to stir frequently and keep at a low heat, so as to avoid scorching.

If using a double boiler, put water in the bottom pan and then add the oil to the top section, stir in the cannabis and heat on low — 130-150°F (55-65°C) — for about 1-3 hours. In a slow cooker, combine the cannabis and oil and cook at the same low temperature for around 1-3 hours.

It is possible to infuse cannabis into oil without decarboxylation at first, but it will take much longer, possibly several hours.

Whatever your method, when you’re done cooking the oil and cannabis together, let it cool and then strain the oil to remove the cannabis, and bottle it somewhere far out of reach of children.

How much cannabis should I use for cannabis oil?

The amount of cannabis you should use for your oil depends on a number of factors including your tolerance and the potency of the cannabis used. Once it’s ready, try a very small amount and wait a couple of hours and see what you think. Don’t get impatient, as edibles can take up to two hours to kick in. It’s very easy to take too much!

You can also use an online edible dosing calculator to estimate the strength of your oil.

There are a number of classic mistakes people make when infusing cannabis, but they’re pretty easy to avoid.

First off, many people simply forget or dismiss the need to decarboxylate their cannabis, creating a far less potent and effective infusion. This step is not only necessary, it’s also quite easy and cuts down the time you need for infusion.

Many people add too much cannabis to their mix and end up making an infusion that is too potent to use liberally. Start small with that first batch, and if you need a more potent mix, adjust your cannabis level as needed.

Another common mistake is to use your absolute best cannabis for making edibles. While a higher THC percentage can make the edibles more potent, the great thing about the long, drawn out cooking process of making edibles is that it draws so much out of the cannabis, creating a full symphony of terpenes, flavonoids, and cannabinoids, even when using a weaker strain of cannabis. In fact, you can even make edibles using shake, leaves, or already vaped cannabis, though you won’t want it to make up the bulk of the cannabis you use for the recipe.

Finally, you’ll want to make sure to pay attention when you’re infusing. While the recipes are quite simple, it’s easy to forget you have something on the stove, or to leave the temperature too high, and find a batch of burnt oil or worse, a grease fire in the kitchen.