Can cannabis help with weight-loss in obesity? Research on this is complex but suggests that cannabis can help.

Cannabis impacts weight and appetite primarily because of its interaction with a natural system in the human body known as the endocannabinoid system.

Made up of natural chemicals called endocannabinoids, endocannabinoid receptors that interact with those chemicals, and enzymes which clear the endocannabinoids from our body, this important system is responsible for homeostasis in some of our bodies most crucial functions. For example, it is a vital element in functions such as:

Normally endocannabinoids are able bind to their endocannabinoid receptors stimulating this system and thus regulating and balancing these key functions. But interestingly, these molecules are very similar to cannabinoids, some of the active chemicals in cannabis. Cannabinoids can also stimulate these receptors to modulate multiple effects.

When it comes to weight, the endocannabinoid system definitely plays a role. Endocannabinoids are important to the regulation of feeding behavior, energy metabolism, and body weight, so cannabinoids are also likely to affect these. In fact, scientists were inspired to look into the endocannabinoid-obesity connection because they noticed that THC — one of cannabis’ active cannabinoids — has a tendency to produce an increased appetite. This cannabinoid is known for stimulating CB1, an endocannabinoid receptor that is primarily concentrated in the central nervous system. Stimulating CB1 leads to increased food cravings and enjoyment of food, as well as promotion of fat storage. So researchers decided to investigate whether blocking CB1 might reduce appetite for those struggling with weight loss.

This might have to do with how endocannabinoid receptor activity affects fat cells. Fat cells come in three basic types: White fat cells are involved in storing fat and secreting hormones, brown fat cells work to expend calories and produce heat, and beige fat cells are transitional, turning from white to brown in response to various stimuli. These beige fat cells can protect against obesity by enhancing energy expenditure, so some researchers believe that a medical intervention that converts white fat cells to beige could be a helpful way to treat obesity. Interestingly, cannabinoid receptors regulate this function — transforming white fat cells into beige ones.

Given this information, there are two basic routes that scientists believe can help with weight loss. The first is blocking CB1 activation to reduce feeding behavior and cause less weight gain. In some rodent-based experiments, blocking CB1 also led to an improved metabolic profile and other markers of improved weight-related health. These changes occurred before the actual weight loss, which suggests a causal relationship between blocking CB1 and achieving weight loss.

In other animal models, scientists have also observed a long lasting overstimulation of the endocannabinoid system in genetically induced obesity. This seems to result in permanent over-activation of CB1, adding more reason to believe that blocking CB1 could help with weight loss. Still, weight loss in human studies doesn’t seem to cause a change in endocannabinoid system activation — suggesting that there is some underlying factor yet to be discovered.

CB1 modulation is also a tricky route to take because CB1 is located primarily in the central nervous system and thus comes with an array of psychoactive effects. In clinical trials, a weight-loss drug called Rimonabant was successful at achieving weight loss by blocking CB1, but was pulled from the market due to severe psychological side effects. Those taking the drug reported anxiety and depression — sometimes to the point of suicidal ideation. This could be a factor that limits our ability to use CB1 activation for weight loss. More research is ongoing.

The other potential route is stimulating CB2. Research suggests that blocking CB2 inhibits weight loss. On the other hand, stimulating it reduces appetite and can indeed lead to weight loss. It’s hypothesized this may also increase fat cell transformation from white to beige. Again, beige fat cells fight obesity by increasing energy expenditure.  Since CB2 is not primarily located in the central nervous system (like CB1), stimulating this receptor doesn’t lead to psychoactive effects.

Medical studies on obesity and cannabis

The endocannabinoid system has a big impact on weight. Based on the research to date, scientists have good reason to believe that blocking CB1 or stimulating CB2 will lead to weight loss. Of course, things get a little bit more complicated when we look at the research on human subjects.

For a long time, we assumed that cannabis always induces increased appetite and weight gain. And it makes sense. Many have experienced cannabis’ appetite stimulating effects. One minute you’re smoking or vaping, then suddenly you have an insatiable craving for snacks. This is known colloquially as the “munchies.” More than one cannabis user has regretted their enthusiastic snacking after the fact.

But does cannabis intake (and the resulting snacking) actually lead to weight gain? The research is somewhat conflicted.

In patients with low weight, such as HIV or cancer patients, we do see weight gain associated with cannabis use. One study on HIV patients found smoked or oral cannabinoids were effective at increasing food intake. Another found that it led to increased weight gain over the placebo. But other studies found that repeated dosing could result in a tolerance to these effects.

So contrary to the mythos surrounding the “munchies” effect, there are cases where cannabis increases caloric intake, and cases were it does not. But this evidence still suggests cannabis use could lead to weight gain. Still, things get even more interesting when we look at larger studies on the topic.

Large longitudinal studies have also been undertaken to look at the connection between cannabis use and obesity. Consistent with the studies above, more extensive cannabis use was associated with increased caloric intake. But mysteriously, it was not associated with increased weight. Multiple longitudinal studies have come back with similar results. While cannabis users report more caloric intake, they have lower levels of obesity.

So despite theory and research suggesting that stimulating CB1 with cannabis’ most plentiful chemical, THC, will lead to weight gain — the majority of cannabis users seem to be benefiting from the opposite effect. Cannabis seems to be protecting from obesity — even while encouraging increased snacking behaviour.

One clue that might help us solve this mystery is a recent study looking at the gut microbiota of obese mice, treated with THC. The study found that chronic THC treatment prevented diet-induced increases in body weight. While the untreated mice gained weight from a high-fat diet — those who were given THC did not. In addition, treatment with THC shifted the gut microbiata of obese mice to look more like the microbiota of healthy mice. Researchers on this study concluded that changes in the gut might actually be contributing to the THC-induced protection from obesity.

Other researchers suggest there may be differences in short term and chronic cannabis use for obesity. Short-term use may cause weight gain, while chronic use protects from it. Researchers also consider the possibility that cannabis has a regulating effect on weight — increasing it only for those who are underweight. Others suggest it may even lead to weight loss for those who are overweight.

There are some limitations to these studies that could be causing conflicting results. For one thing, study design and bias can come into play — and in these studies — it’s worth noting that in some cases the research was looking at cannabis as a potential treatment for obesity, while in others they were looking at it as a potential cause.

Another important factor is the chemical composition of the cannabis being used, which varied amongst the studies, when it was tracked at all. In some studies, THC levels were as low as 1.84% — a very low level when compared to a majority of cannabis products on the market. Other studies looked at cannabis use in general, with no regard for the actual chemical composition of the plants being used.

While looking specifically at THC and CBD is important, the overall chemical composition of the cannabis plant is incredibly varied, and the effects of any individual compound in the plant can shift, depending on the other chemicals present. This is called the entourage effect. Due to this variability, it’s hard to get clear results from studying cannabis in general — rather than studying specific compound or blends of compounds found within cannabis. So it’s not yet clear whether the protective effect cannabis seems to have on obesity might be due to compounds other than THC and CBD.

Another factor is the size of the group being studied. In some cases we saw large studies with thousands of participants. But in other cases the groups were so small (less than a dozen), any data found has to be taken with a grain of salt. With small groups like this, individual differences and other factors can cloud the data.

The one thing everyone can agree on is that more research is needed to fully understand these implications.

If you are considering using cannabis for obesity, keep in mind that cannabis has been shown to cause weight gain in with short-term use, with data showing a higher likelihood of weight gain. Still, statistically, you are more likely to be protected from weight gain than to gain weight from using cannabis in the long term. 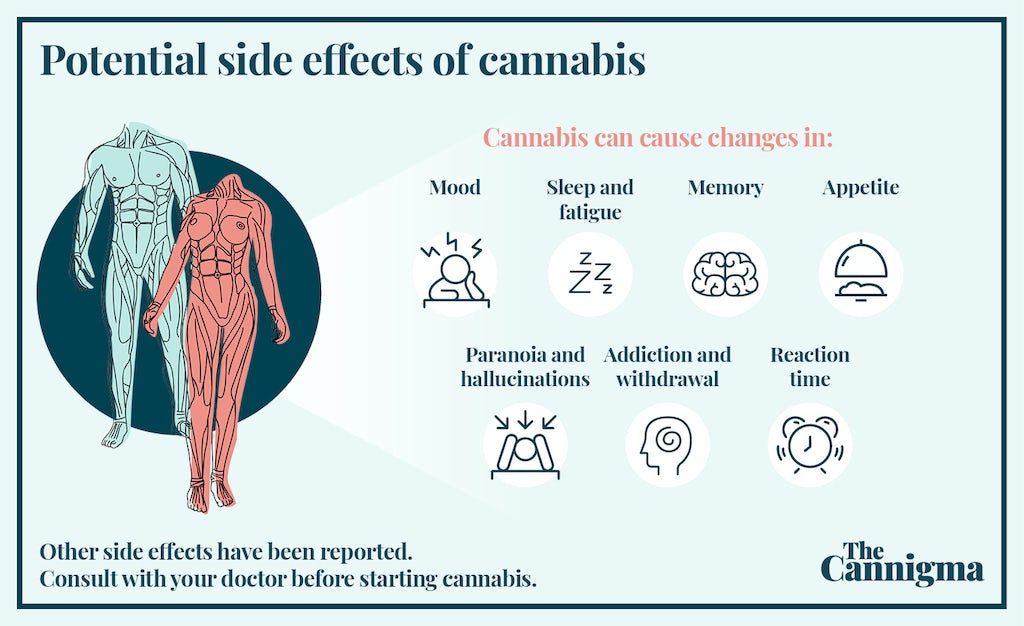