Dozens of studies have shown that cannabis helps with pain. To date, there are no human studies published specifically looking at cannabis and knee pain. Since we do have studies showing cannabis helps with joint pain in conditions such as osteoarthritis that cause knee pain, it’s reasonable to assume that cannabis may also help with this specific pain. However, exactly how effective cannabis is for knee pain is a question that can only be answered after specific studies are done.

Furthermore, multiple strains of cannabis have been identified that have different chemical profiles. Nevertheless, research is lacking regarding which strains would be most efficacious for specific conditions.

How cannabis works on knee pain

CB1 receptors are densely cumulated in frontal-limbic brain regions which regulate emotional manifestations of pain. CB2 receptors are abundant in immune cells and represent a target for affecting inflammatory processes.

There is evidence that the synovium, soft tissue membrane that lines spacing of diarthrodial joints, tendon sheaths, and bursae, plays a considerable role in the cause of knee pain caused by osteoarthritis. CB1 and CB2 receptors are expressed in the synovium of osteoarthritis and rheumatoid arthritis patients. According to researchers, the presence of cannabinoid receptors in this membrane may indicate the endocannabinoid receptor system is an important therapeutic target for treating the pain associated with these conditions.

Research on knee pain and cannabis

Studies have made it clear that cannabis helps with chronic pain. Many of the studies looking at cannabis and chronic pain have examined conditions that affect joints such as osteoarthritis.

The following studies give an overview of cannabis’s effects on chronic pain and joint-specific pain.

The association between cannabis use and reductions in chronic pain (in general and in conditions affecting joints) is positive. What we still require are clinical trials examining the effects of cannabis on people with knee pain.

There is currently an undergoing randomized, double placebo trial investigating the use of vaporized cannabinoids for arthritis of the knee joint. Different ratios of THC and CBD are being administered on 40 subjects to test the safety, efficacy, and tolerability of various cannabinoid combinations. The trial was estimated to be completed in mid-2019 but still appears to be in progress.

Both animal and human studies appear to show positive effects for CBD as a pain-reliever in conditions affecting the joints such as osteoarthritis and fibromyalgia.

CBD is useful for pain relief, but whether CBD is effective for knee pain is yet to be determined. Human trials are needed to test whether CBD administered to people with knee pain helps reduce pain more than placebo.

Cannabis is a safe medication to use for joint pain, and although it has potential side effects, it is a much safer option than opioids. Short term side effects of cannabis may include euphoria, perceptual changes, increased appetite, and changes to energy levels.

Long-term side effects are unlikely for infrequent users of small amounts of cannabis. Chronic use of cannabis — especially when started as an adolescent — can cause cognitive impairment later in life and increase the chances of addiction, which occurs in approximately one in ten people who use cannabis.

CBD has few side effects, but in some people, it may cause stomach discomfort and fatigue. CBD also has the potential to have negative interactions with certain blood thinners. 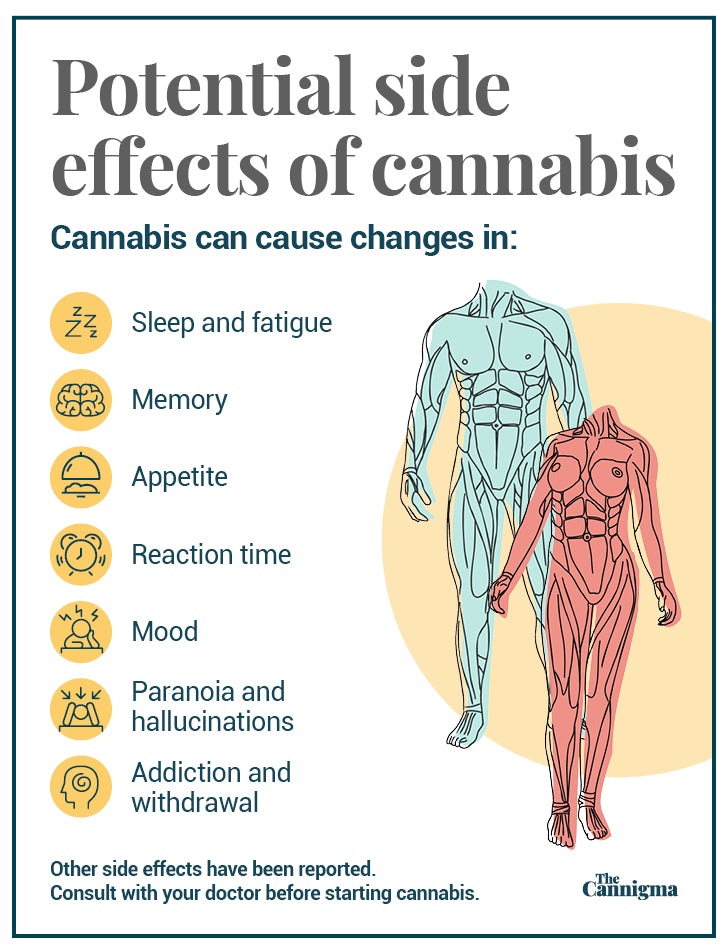