Can Cannabis Help With Opiate Use / Addiction?

Although studies are far from conclusive, there are promising signs that cannabis has a major role to play in treating multiple problems associated with opioid use.

For example, recent studies point to cannabis as beneficially controlling nausea and insomnia in people undergoing opioid withdrawal. Cannabis also has been shown to address the underlying symptoms of pain that often lead to opioid use in the first place. And some research has even suggested that cannabis use could effectively treat Opioid Use Disorder (addiction) itself.

Many healthcare professionals are increasingly considering cannabis as part of a therapeutic approach to treating multiple adverse opioid issues. Even state governments have stepped forward in approving medical marijuana for opiate abuse. Though research is still limited, initial findings are encouraging in suggesting that cannabis can help alleviate opioid withdrawal symptoms such as nausea while also addressing underlying pain and insomnia. Healthcare officials caution, though, that more research, particularly randomized control trials, are needed.

To better understand how cannabis may have a positive effect on helping opioid users, it’s important to consider the human body’s endocannabinoid system (ECS) and its complex interplay with the chemical elements of both opioids and cannabis.

The ECS regulates a wide array of biological functions, most importantly through modulating homeostasis. It was only recently discovered to exist in all vertebrates.

It’s important to note that the endocannabinoid system is just one type of neurotransmitter system in the human body. Another is the opioidergic system, which is regulated by opioids, and researchers are only now beginning to better understand how the two systems work to modulate conditions such as pain and anxiety and how their functioning can both raise or lower the risk of drug abuse.

Overall cannabis research efforts has lagged in the US because of cannabis’s historic classification as a dangerous Schedule I drug, precluding it from significant research. With increased acceptance of legalized and medical marijuana across the US, research now is beginning to grow, including research into whether and how cannabis can be used to combat opioid abuse. As it stands now, there are numerous observational studies, as well as some preclinical and clinical surveys, that give a glimpse of the possible benefit cannabis offers.

For instance, a 2018 National Institutes of Health report looked at the complex interplay of the endocannabinoid and opioidergic systems and found evidence to suggest that cannabis holds great potential to prevent opioid misuse (through its use as an analgesic alternative), alleviate opioid withdrawal symptoms, and decrease the likelihood of relapse. The study examined how CB1 receptors and mu opioid receptors (MORs) typically are distributed in the same areas of the brain and how this biological overlap points to the interaction between the two systems, especially in regard to emotional reward responses and other physiological actions that could affect opioid withdrawal.

An earlier study conducted by the University of Michigan in 2016 found that medical cannabis use is associated with decreased opiate use. Using an online questionnaire, researchers conducted a cross-sectional retrospective survey of 244 medical cannabis patients with chronic pain between 2013 and 2015. They concluded that cannabis can be a key asset in addressing opioid withdrawal symptoms.

A 2018 study published by Howard University Hospital reviewed how cannabis might positively affect OUD outcomes. That study found that one key benefit of using cannabis is that CBD actively controls nausea, one of the more prominent adverse effects of opioid withdrawal. The researchers cautioned, though, that cannabis still posed a risk of introducing disorientation and lethargy for some users.

A 2019 study also looked at how CBD might be used in addressing opioid abuse issues. The exploratory double-blind randomized placebo-controlled trial, published in The American Journal of Psychiatry, found cannabidiol (CBD) can reduce cue-induced craving and anxiety, two critical aspects of addiction that often contribute to relapse and continued drug use. It’s important to note that CBD was investigated in people with heroin use disorder, but researchers say they are confident the same data can be extrapolated for addiction to other types of opiates as well.

In addition, a 2018 Canadian study published in the journal Addiction looked at how cannabis use might affect the odds of an individual sticking with an anti-opioid treatment program. The study found that one of the main factors increasing the chances that people would stay enrolled and engaged in treatment efforts in Vancouver was participants’ daily marijuana use.

Though an ever-increasing number of studies are exploring the use of cannabis for opioid abuse, at least one study, conducted in 2015, found no evidence for a reduction of opioid-withdrawal symptoms by cannabis smoking during a methadone dose taper.

Cannabis is believed to be safe drug treatment for a variety of issues, and there have been no reported fatalities in its long history of use. 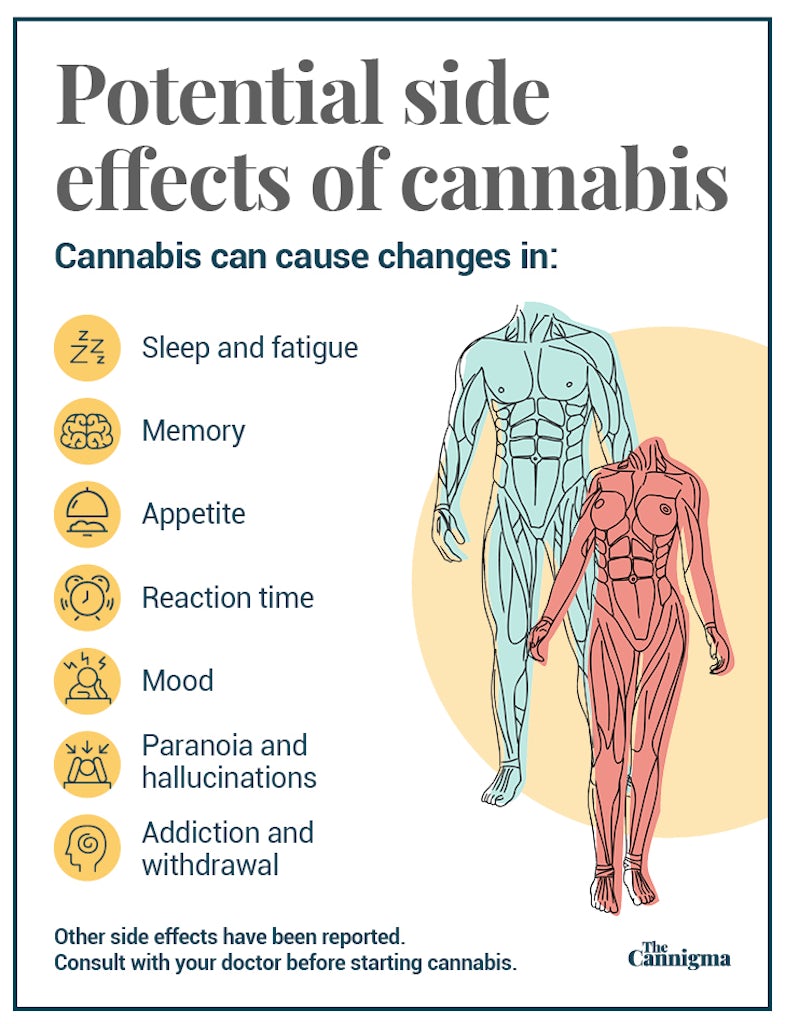 The majority of reported side effects are mild to moderate and include fatigue, drowsiness, diarrhea, vomiting, decreased appetite, and fever. The short-term side effects of THC can include memory, motor and judgment impairment. Long-term possible side effects can include cognitive impairment, a small risk of addiction, and an increased risk of developing a psychotic disorder.

Cannabis as an addiction treatment