Cannabis has a long history of use for female-specific medical conditions, including menstrual pain. Although studies in this area remain scarce, research suggests that the endocannabinoid system regulates many processes related to menstrual cramps, such as pain and gastrointestinal function.

Furthermore, there’s plenty of evidence that cannabis can relieve pain, nausea, loss of appetite, bloating, and other issues that happen to be symptoms of menstrual pain.

There’s no direct clinical evidence supporting cannabis use in menstrual pain and its associated symptoms. However, accumulating research findings suggest that the endocannabinoid system is a prime target for relieving abdominal pain, nausea, appetite loss, bloating, and other symptoms of menstrual cramps.

Cannabis may also be helpful when it comes to the mood shifts that often characterize PMS. Though there’s a lack of knowledge among researchers about how exactly cannabinoids might stabilize mood, they do suggest that the endocannabinoid system can regulate emotional behaviour, mood and stress.

As such, it’s not surprising that cannabis has been used to relieve menstrual issues for thousands of years and that dozens of studies back the pain-relieving, anti-nausea, appetite-stimulating, and other effects of cannabis-based medicines.

Although more research is needed before cannabis is accepted as a treatment for menstrual cramps, there’s enough data to warrant trying it out, especially considering that it seems to address not only pain but many other symptoms.

The endocannabinoid system (ECS) consists of cannabinoid receptors, endocannabinoids, and enzymes that synthesize and break them down. The major role of this system is to maintain a state of balance in the human body called homeostasis. To achieve this, the ECS regulates key processes such as pain, sleep, mood, temperature and immune functions.

So far, scientists have identified two types of cannabinoid receptors: CB1 and CB2. They are found everywhere in the body, with CB1 being particularly abundant in the central nervous system and CB2 in cells of the immune system. These receptors are activated by anandamide and 2-AG, the two main endocannabinoids produced by our bodies.

Furthermore, plant-derived cannabinoids (phytocannabinoids) such as THC and CBD can also interact with cannabinoid receptors and enzymes. This explains how cannabis-based medicines can produce beneficial therapeutic effects.

There isn’t any specific research looking at the involvement of the ECS in menstrual pain and related symptoms. Having said that, ECS receptors, endocannabinoids, and enzymes are present in the female reproductive system and play an important role in its healthy function.

More importantly, the ECS regulates processes related to the symptoms of menstrual pain, such as gastrointestinal function and pain, which means targeting it with cannabis-based medicine can potentially offer relief.

To begin with, the endocannabinoid system plays a major role in regulating pain. This is demonstrated by the presence and involvement of CB1 and CB2 receptors and endocannabinoids in every part of the so-called pain pathway: the processes that result in the sensation of pain. For example, the CB1 receptor is abundant in parts of the peripheral and central nervous systems related to sensing, sending, and processing pain signals. Meanwhile, the CB2 receptor plays a bigger role in inflammatory pain through its involvement in immune function. Also, both 2-AG and anandamide are known to have pain-relieving effects. These findings suggest that targeting the ECS is a promising option for relieving the abdominal pain and discomfort seen in menstrual cramps.

Furthermore, the endocannabinoid system is known to regulate appetite and food intake. This is best demonstrated by the fact that CB1 receptor activation increases appetite, and is the reason synthetic THC drugs are used to counter illness-related weight loss. As such, the ECS can also be utilized to counteract the appetite loss associated with menstrual pain.

Moreover, the endocannabinoid system plays an important role in regulating gastrointestinal function, which means it can help with nausea, bloating, and related digestive symptoms of menstrual pain. Most notably, activation of the CB1 receptor seems to reduce gastrointestinal motility, which plays a key role in symptoms such as nausea, bloating, diarrhea, and abdominal pain.

Meanwhile, research suggests CB1 activation in the central nervous system can also reduce the urge to vomit, another possible symptom of menstruation. The role of the ECS in regulating digestive function is highlighted by the effectiveness of THC drugs such as dronabinol in reducing nausea and vomiting.

Taken together, all of these research findings highlight how we can utilize the ECS to relieve menstrual pain and related symptoms.

Despite the long history of cannabis use for menstrual discomfort, there are currently no studies looking at the effects of cannabis on relieving menstrual pain and related symptoms. Having said that, there’s a good deal of evidence that cannabis can improve nausea, bloating, appetite loss, various types of pain, and other issues that happen to be symptoms of menstruation.

To start off, pain relief is arguably the most research-backed benefit of cannabis, with a 2015 review of 28 clinical trials concluding that there was “moderate-quality evidence “to support its use in chronic pain. More importantly, the National Academies of Sciences, Engineering, and Medicine stated in 2017 that “There is conclusive or substantial evidence that cannabis or cannabinoids are effective for the treatment of chronic pain in adults.”

Furthermore, there’s evidence that cannabinoids such as THC and CBD can reduce nausea and vomiting. For example, a 2007 study found that the THC-based drug dronabinol was as effective as prescription medication at reducing nausea and vomiting in people undergoing chemotherapy, with 71% of patients completely resolving their nausea. More importantly, a 2015 systematic review of 23 clinical studies concluded that “Cannabis‐based medications may be useful for treating refractory chemotherapy‐induced nausea and vomiting.”

Similarly, it’s a well-established fact that cannabis use stimulates appetite. This was demonstrated by a 1995 study where 139 people suffering from AIDS-related weight loss successfully used dronabinol to maintain and even regain weight. These effects are so well-documented that cannabis in general and THC specifically are now widely used to help patients suffering from weight loss associated with chronic disorders.

In addition, cannabis may help relieve anxiety and other mental issues associated with menstrual pain. For example, a 2011 study found that CBD, a non-psychoactive cannabinoid, improved anxiety induced by public speaking in people with social anxiety disorder (SAD).

Furthermore, two studies of people with inflammatory bowel disease (IBD) reported that cannabis use was common for relieving abdominal pain, diarrhea, bloating, and reduced appetite. As it happens, these symptoms also occur in menstrual cramps.

Moreover, a 2002 review by leading medical cannabis expert Dr. Ethan Russo highlighted records going back thousands of years of cannabis use for relieving conditions that affect women, including menstrual pain. This review noted that even Queen Victoria was prescribed monthly doses of cannabis by her physician to reduce menstrual discomfort. Dr. Russo concluded his review by stating that cannabis can offer a safe, effective alternative treatment for dysmenorrhea (menstrual cramps) and other symptoms related to menstruation.

Similarly, a 2018 review noted that cannabis is commonly used to relieve menstrual pain and that cannabinoids such as THC and CBD have muscle-relaxing effects that can relieve the muscle spasms involved in menstrual cramps.

Also, several studies discuss anecdotal reports of cannabis relieving menstrual cramps and list the condition as one of the reasons people turn to medical cannabis. Lastly, research on adenomyosis and endometriosis, two painful disorders affecting the tissue lining the uterus, suggests that cannabis may be a therapeutic option for pain relief.

In summary, although clinical studies looking directly at the use of cannabis for relieving menstrual pain are lacking, there’s plenty of evidence that cannabis can help with abdominal pain, nausea, bloating, appetite loss, and other menstruation symptoms.

One of the main barriers to the medical use of cannabis is its psychoactive side effects. These include memory impairment, euphoria, anxiety, paranoia, and decreased reaction time. 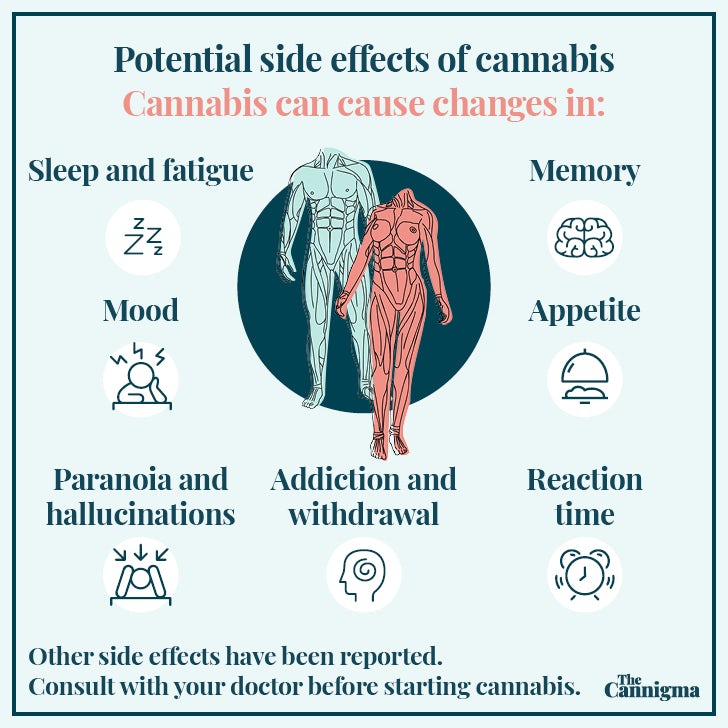 Also, cannabis can cause other side effects, such as fatigue and dry mouth. Generally speaking, however, cannabis is a safe substance with minor and passing side effects. Furthermore, using CBD-heavy preparations such as CBD oil is an effective way to avoid the psychoactive effects of cannabis.

By comparison, standard medications used to relieve menstrual pain, such as NSAIDs, are associated with side effects such as stomach ulcers, GI bleeds, and its overuse associated with harm to the kidney, liver and heart.

What does infertility have to do with cannabis?