Possibly the most famous cannabis strain of the past few decades, OG Kush has a seat at the center of the pantheon of weed strains that have shaped how we get high today. A parent chemovar for countless popular strains, OG Kush has been duplicated and imitated countless times, leaving a constellation of new chemovars and happy weed filled days in its wake. But where did OG Kush come from, and what makes it such a legendary strain? 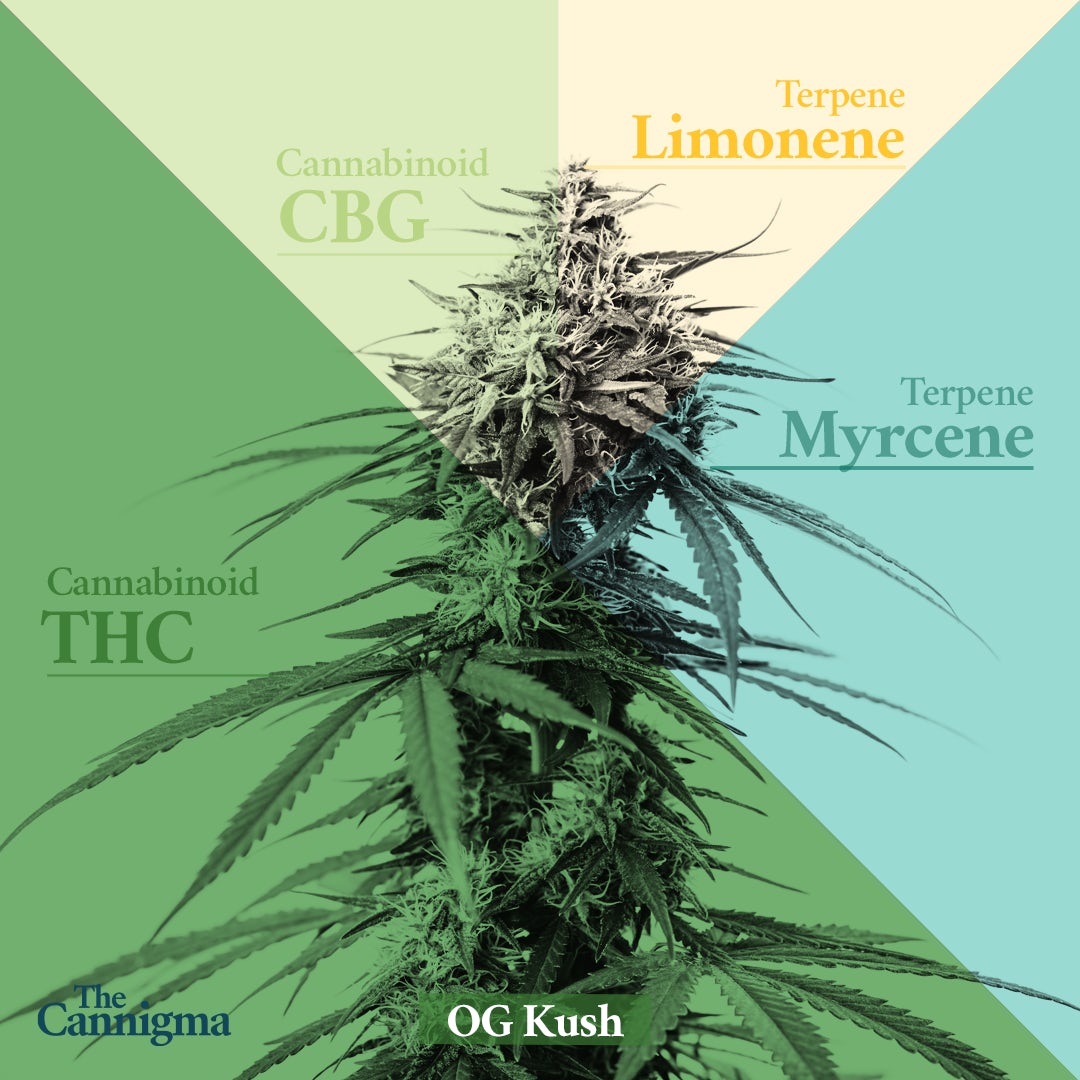 For a weed strain of such importance, the exact origin of OG Kush is pretty hard to nail down. Often described as a mix of Chemdawg and a Hindu Kush landrace, one of the most popular stories revolves around a Florida man named Matt “Bubba” Berger.

Berger, who referred to himself as “one of the 6 original godfathers of the OG Kush” and “the creator of Bubba Kush,” in an interview with The Cannigma, reportedly created a highly-popular kush strain by crossing Northern Lights with a Kush plant, which originally became Bubba Kush. Berger reportedly crossed the “Bubba” cutting with another strain called Krippy or Supernaut, which later made its way to LA where it became a hit, and the cannabis household name we know today.

Another story reportedly backed up by reputable cannabis source B-Real of Cypress Hill holds that “the strain came up from Florida under the name of Crip, possibly Creep” in the early 90s and made it to the LA music sense, where it took off.

The theme that runs through most OG Kush origin stories is that a mysterious Kush mix from Florida made its way to southern California in the early 90s, took off with rappers and other musicians, and the rest is history.

OG Kush produces dense, frosty buds that produce a pungent, earthy, and woodsy aroma. The taste can be spicy and citrusy and the high is a potent mix of both cerebral and couchlock, producing a relaxing, tranquilizing high, as well as a euphoric sensation.

But that doesn’t change the most argued about aspect of OG Kush — its name.

What Does “OG” mean?

Theories abound about the origin of “OG” with countless people stating that it stands for “Original Gangster,” a slang term used to to signify that it’s a veteran, a mainstay of the underworld — and now the legal weed scene. It could also serve as a way to distinguish it from imposters.

Others state that the abbreativation stands for “Ocean Grown,” with the argument being that this was meant to signify why it was such a popular strain (because….it’s grown by the ocean?).

For more on “Ocean Grown,” let us turn to Cannabis Pharmacy:

“The story goes that, in 1993, a cultivator in the foothills of the Sierra Mountains in northern California got the Chemdawg cut. One of the growers with whom he shared Chemdawg lived on the ocean in Sunset Beach, California.

Someone told the breeder the reason his kush was so good had to be that it was “mountain grown.” The breeder famously replied, “Nah, bro, it’s ocean grown.” The Ocean Grown tag stuck and was soon shortened to OG Kush.”

Another theory states that OG stands for “Original Grower,” a tribute to the marijuana growers who smuggled seeds back from Afghanistan in the 1970s, as well as the original incarnation of Overgrow.com, a popular cannabis grow site.

The bottom line? This isn’t an exact science, but what is undeniable is that OG Kush is a strain that has left an undeniably large impact on the cannabis scene.

Cannabinoids and terpenes in OG Kush

The chemical profile you see below is an average of laboratory tests for products called “OG Kush” — so it’s just an estimate of what you might find when you buy an OG Kush strain.

Pinene 0.1%
* The numbers in the tables are averages of data from multiple resources
** Terpenes are of pharmacologic interest at concentrations above 0.05%

How OG Kush affects you

Based on user reports from resources like Leafly, OG Kush often produces happiness, relaxation, euphoria and upliftment. It can also cause dry mouth, dry eyes and (less commonly) paranoia and dizziness. But really, marijuana affects people in different ways. The two main factors are your own biology (your endocannabinoid system, metabolism, age, weight, etc). and the product you choose (including its cannabinoid and terpene breakdown, and the delivery method used).

OG Kush is considered a rather difficult strain to grow, mainly because it can be susceptible to mildew, pests, and disease. For growers, this means making sure that the plants are well ventilated and that you prune regularly. Also, because the buds can be quite dense and heavy, they may require setting up a support system for the buds.

Luckily, OG Kush has a short flowering time of around 8-9 weeks, and it can produce a rather healthy yield of around 16 ounces per plant outdoors, and a little over an ounce and a half per square foot indoors.

If grown outdoors, it should flower by early October, just make sure it’s in a warm climate with low humidity.

OG Kush has been used to breed countless strains that have made a name in their own right. But what about OG Kush itself? The strain’s genetics are frequently given as a cross of Hindu Kush with an unknown strain, with the potent Chemdawg (widely-cited as a parent strain of Sour Diesel) often mentioned as the mystery co-parent.

The list of strains that were bred using OG Kush is very long and includes a number of very popular cannabis world favorites. A short list would include: