At some point in the last couple years, tons of us looked around and realized that all of our favorite desserts are cannabis strains now, and all of our favorite weed strains are dessert. This definitely goes for Sunset Sherbet – also known as just Sherbert or Sherbet – yet another blockbuster weed strain from the Bay Area cannabis kings at Sherbinskis. Fruity and frosty with a relaxing and euphoric high, there’s nothing quite like a bowl of Sherbet. 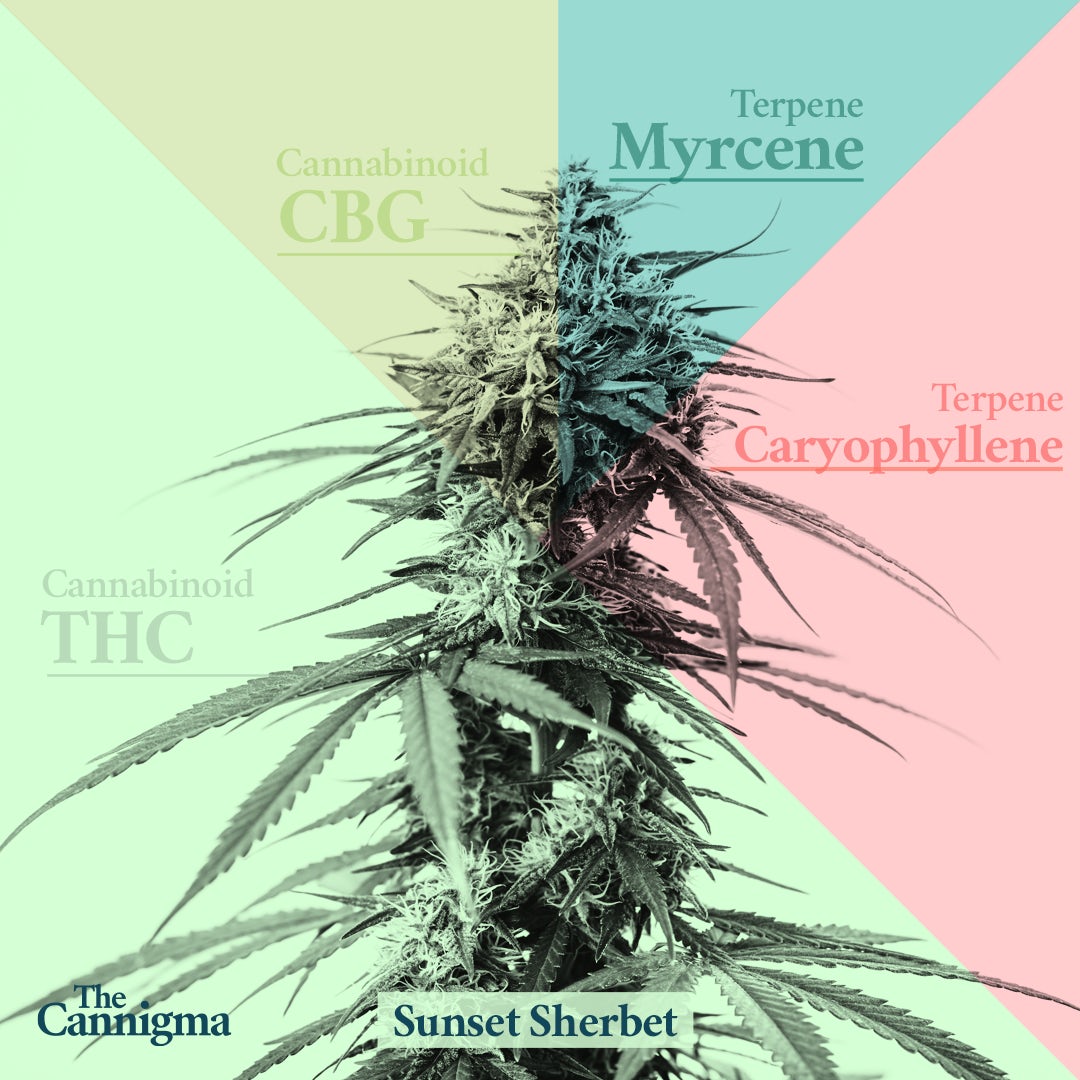 The growers at Sherbinskis in San Francisco describe Sunset Sherbert as “a flagship for Sherbinski” and a “powerfully potent smoke” due to its Girl Scout Cookies and Pink Panties parentage.

But if we really want to get to the bottom of the Sunset Sherbert story, we need to head back to grower Mr. Sherbinski’s grandmother’s house.

In 2017, Sherbinski described how he was at his grandmother’s house in 2014 when he accidentally pollinated a Girl Scout Cookies plant with a Pink Panties male, creating the strain we all know today as Sunset Sherbet.

The strain may also be confused with Sorbet, which Leafly describes as “a clone-only creation from DNA Genetics that many believe to be a phenotype of Sunset Sherbert.” They also mention Sorbet 11, reportedly a cross of Sunset Sherbert and the Original Lemonnade. DNA Genetics currently sells seeds for at least 13 strains that include Sorbet parentage.

What is smoking Sunset Sherbert like? Sherbert is known for its sweet, fruity, earthy aroma and the flavor is described as everything from berries to creamy mint. The high of this indica-leaning hybrid is described as relaxing and euphoric, with Sherbinskis saying it creates “a full body high” that can melt away stress and bad vibes like a bowl of rainbow sherbet on the hot summer pavement.

And while it’s a chill, relaxing strain that’s perfect for a laid back night in, you can bet if you show up at the barbecue with a jar of Sunset Sherbert someone’s going to bring you a plate before you’re even in the door.

Cannabinoids and terpenes in Sunset Sherbet

The chemical profile you see below is an average of laboratory tests for products called “Sunset Sherbet” — so it’s just an estimate of what you might find when you buy Sunset sherbet weed.

Limonene 0.13%
* The numbers in the tables are averages of data from multiple resources
** Terpenes are of pharmacologic interest at concentrations above 0.05%

How Sunset Sherbet affects you

Based on user reports from, Sunset Sherbet tends to produce relaxation, happiness, euphoria, and upliftment. It can sometimes cause dry mouth, dry eyes, and less often- anxiety and dizziness. But really, marijuana affects people in different ways. The two main factors are your own biology (your endocannabinoid system, metabolism, age, weight, etc). and the product you choose (including its cannabinoid and terpene profile, and the delivery method used).

The good news first – Sunset Sherbert is generally considered an easy strain to grow, and has a flowering time of around 8 weeks. The bad news? It has a pretty low yield – less than an ounce per square foot indoors and about 11 ounces per plant outdoors.

That said, it is a bushy plant of medium height that is considered resistant to molds and mildews and does not take a lot of careful tending. Growers will want to make sure that Sunset Sherbert is in a warm, dry climate, and kept away from much humidity.

The plant can thrive both indoors and outdoors, and should be ready for harvest by early October.

Sunset Sherbert was bred from Pink Panties — believed to be a cross of a Burmese landrace and a Florida Kush plant (Sherbinski said it was created by administering “Male Burmese Pollen to Sherb’s famous OG cut) — crossed with Girl Scout Cookies (GSC), one of the most acclaimed cannabis strains of all time.

Pink Panties has a citrus and herbal flavor, while Girl Scout Cookies is known more for having more of what fans describe as a sweet, even minty flavor.

Sunset Sherbert is similar to another Sherbinski strain — Gelato — which is one of the most popular strains anywhere, and a cross of the Thin Mints GSC phenotype and Sunset Sherbert.

With its Girl Scout Cookies parentage, Sunset Sherbert shares genetics with GSC parent strains Durban Poison and OG Kush, two of the most acclaimed and influential strains in cannabis.

In addition to Gelato, Sunset Sherbert was used to breed strains such as Sorbet #11 (a cross with Original Lemonnade) and Blue Sherbert (a cross with Blue Cookies), to name just two.