You may have smoked killer strains before, but Jack the Ripper weed takes things to another level. An energizing haze strain, this sativa-dominant hybrid is known for producing an intense high and very resinous buds with a powerful lemon aroma that can make it a great strain for producing concentrates. Put it that way, Jack the Ripper doesn’t sound so frightening after all. 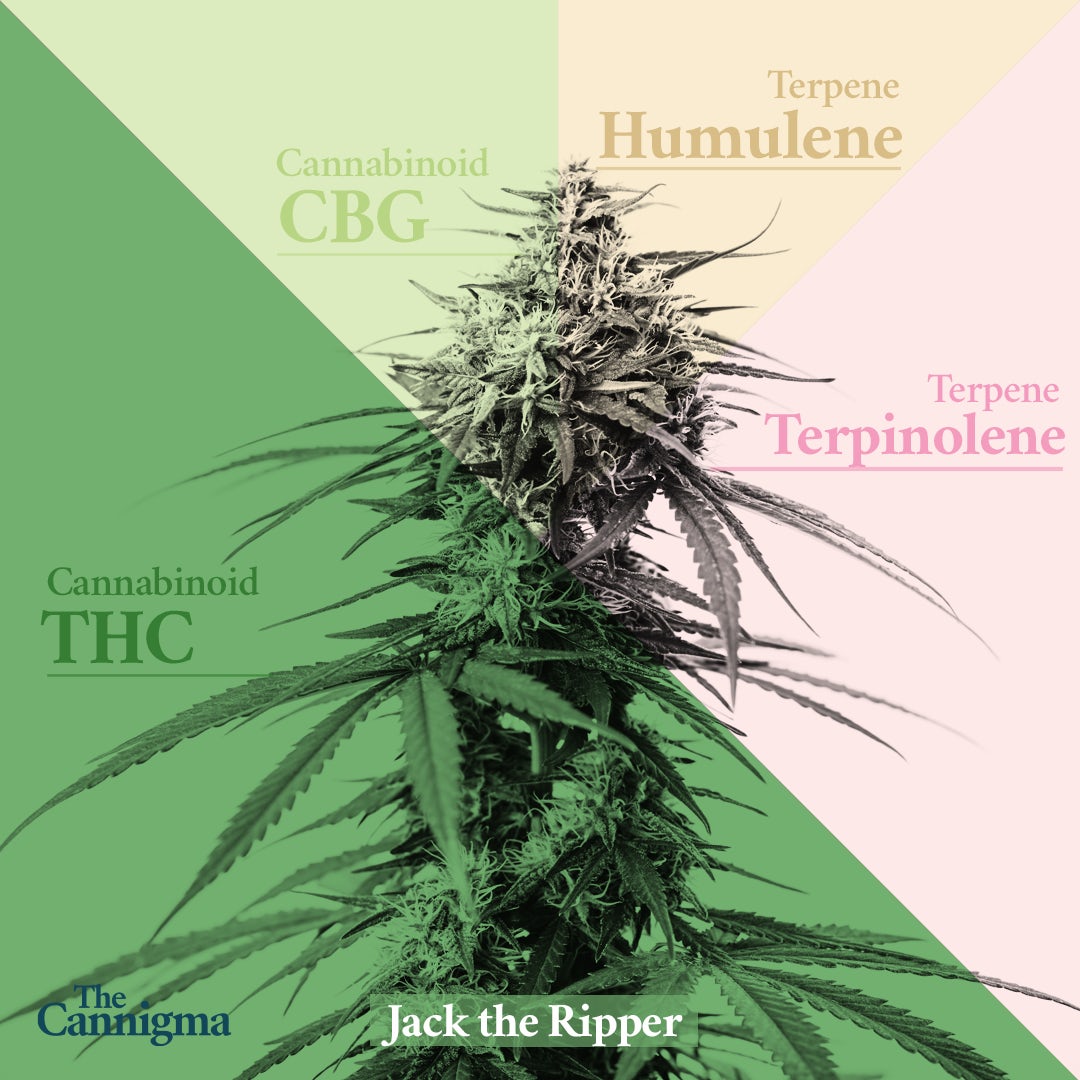 The name Jack the Ripper is not an homage to late 19th century serial killers, rather, it speaks to the heritage of the strain.

The strain was reportedly developed by Subcool’s the Dank, the same breeder behind the strain Chernobyl (he has a thing for names that aren’t especially chill). He has described it as a cross of a Space Queen male with a Jack’s Cleaner clone — the latter being a strain that was also developed by Subcool. Jack’s Cleaner is a sativa-dominant strain bred by crossing Jack Herer with the Cleaner, and is known for being an energetic, potent strain.

Subcool said that the Jack the Ripper strain is a good example of how outscrossed strains “are sometimes better than the parent strains. I feel this is the case with Jack the Ripper. The lemon tart of Jack’s Cleaner has combined with the candy mango flavor of the Space Queen to create a resinous marvel.”

He added that the experience of breeding Jack the Ripper, also known as JTR, “represents the sum of what I’ve learned and collected as a breeder. To succeed in creating crosses that maintain the exact desirable traits of the mother that I wanted while improving other specific qualities is a humbling experience.”

Named one of the top 10 strains of 2006 by High Times magazine, Jack the Ripper is a popular strain that is praised for its intense, cerebral high that hits hard right off the bat, and then tapers off into a more chill buzz. With an intense lemony aroma and a sweet, earthy flavor, smoking Jack the Ripper is a fully-immersive experience.

Perhaps ironically, Jack the Ripper is less suited to the nighttime, and is more of an upbeat strain for spending an overcast day trudging through the London fog.

Cannabinoids and terpenes in Jack the ripper

The chemical profile you see below is an average of laboratory tests for products called Jack the Ripper — so it’s just an estimate of what you might find when you buy Jack the Ripper.

Myrcene 0.15%
* The numbers in the tables are averages of data from multiple resources
** Terpenes are of pharmacologic interest at concentrations above 0.05%

How Jack the ripper affects you

Based on user reports, the Jack the Ripper strain can produce happiness upliftment, euphoria and energy. This correlates with some studies that suggest terpinolene (the most dominant terpene in Jack the Ripper) can create energizing and uplifting “sativa-like” effects. It may also cause dry mouth, dry eyes, paranoia and dizziness. But really, marijuana affects people in different ways. The two main factors are your own biology (your endocannabinoid system, metabolism, age, weight, etc). and the product you choose (including its cannabinoid and terpene breakdown, and the delivery method used).

Jack the Ripper is considered a relatively easy strain to grow which can thrive both inside and out, though if grown outdoors you’ll need to protect it from frost.

It produces a rather modest but not small yield but should be ready to harvest in 8-9 weeks if grown indoors, or by October if grown outdoors. Jack the Ripper buds are known for being especially frosty and resinous.

Jack the Ripper also has in its lineage the famed Jack Herer, a sativa-dominant strain known for its energetic high.

Jack the Ripper has been used to breed a number of strains, most notably the Subcool strain Chernobyl (a cross with Trainwreck and Trinity). Other strains include:

Ask the Expert Can I substitute coconut oil for vegetable oil in weed gummies?
Previous Article OG Kush
The Cannigma uses cookies to improve your experience and to show you personalized adsACCEPTPrivacy Policy
Manage consent