A powerful reaction takes place when you spark Chernobyl — a sativa dominant hybrid that packs a heavy punch and causes a euphoric, energizing high that can last for hours. But far from making you feel like you’ve collapsed in on yourself like a nuclear reactor, Chernobyl is the type of strain that can have you floating for hours, laughing and chatting the day away — and leaving your friends to deal with the fallout. This is also a colorful, dank strain that leaves a powerful aroma lingering in the air well after you exhale. 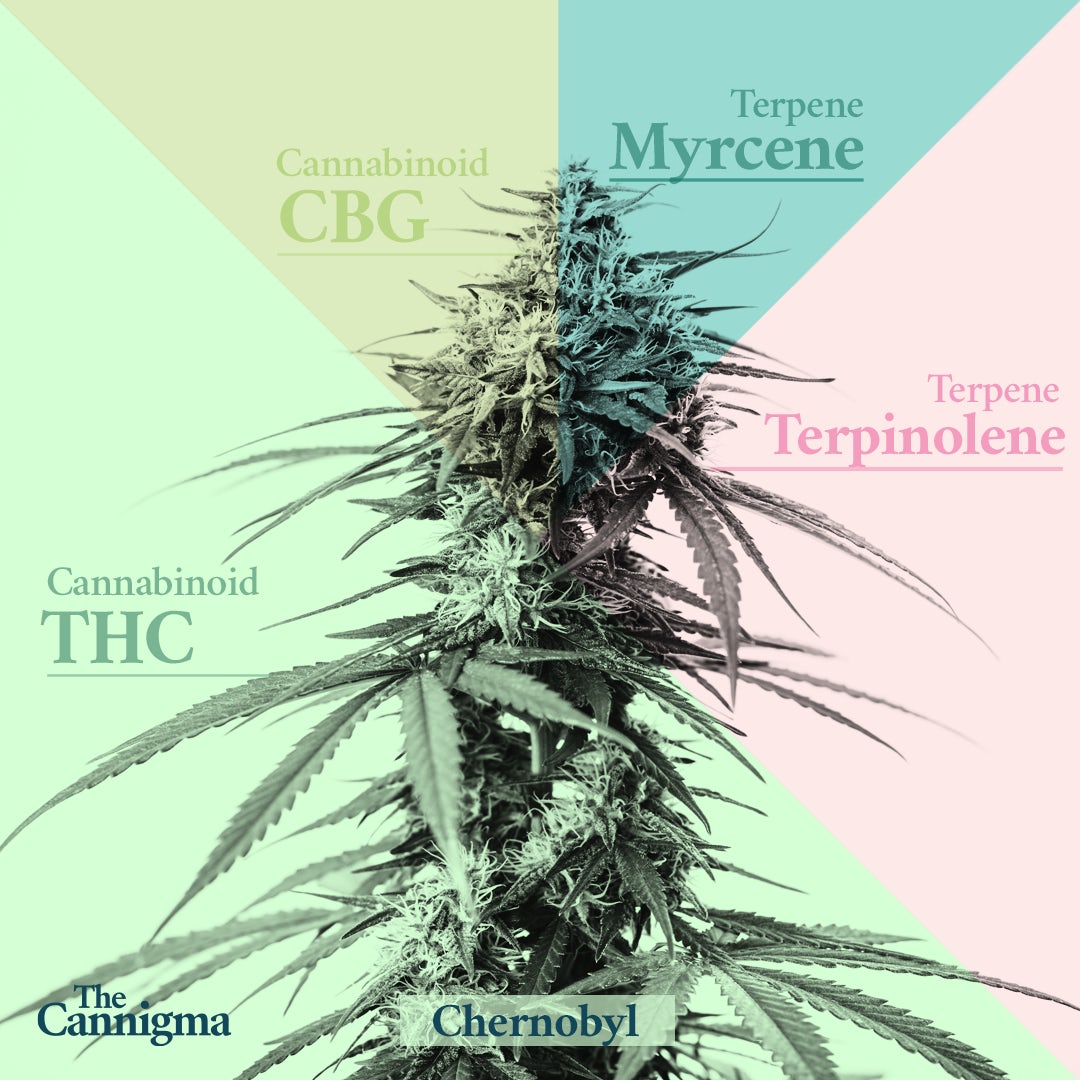 The culprits behind Chernobyl (the strain) are from TGA Genetics, now known as “Subcool’s the Dank,” after chief breeder Subcool. The same team was also responsible for “Jack the Ripper,” an up-tempo, very citrusy haze that has been named as one of the parent strains of Chernobyl, along with Trainwreck and Trinity.

Medical Jane quoted Subcool as saying that “the complex coloring that shows up late in the plant’s life is a thing of beauty and the potency of this mother is epic.”

According to the article, Subcool had traveled out to the west coast to find “the best Trainwreck cut he could locate,” and after almost giving up entirely, he finally found a female plant that had everything he was looking for. He crossed it with Jack the Ripper, and through this act of fusion (fission?), the strain Chernobyl was born.

But why Chernobyl, of all the names to pick? According to Cannaconnection, “this strain is developed to carry the memory of this disaster with its strong and very pungent aromas.” Considering that the breeder’s flagship strain was named after Jack the Ripper, perhaps chill strain names aren’t a must for Subcool.

The flavors of Chernobyl are reported as lemony, but also sweet, with a distinctive “lime sherbet smell” according to Leafly.

Chernobyl is an energetic strain that creates a long-lasting high, meaning it’s ideal for day-time smoking. That said, users report that the sensation is also very relaxing, so you could find it works great for later in the day as well.

The strain has won accolades — including being named the High Times Strain of the Year for 2010. In fact, the magazine’s senior cultivation editor Danny Danko described Chernobyl as “devastatingly powerful” with “a taste all its own.”

So, are you ready to visit Chernobyl the safe way?

Cannabinoids and terpenes in Chernobyl

The chemical profile you see below is an average of laboratory tests for products called “Chernobyl” — so it’s just an estimate of what you might find when you buy Chernobyl weed. It shows moderate concentration of THC (averaging 16%) and high terpinolene (0.47%) and myrcene (0.35%) concentrations.

Limonene 0.21%
* The numbers in the tables are averages of data from multiple resources
** Terpenes are of pharmacologic interest at concentrations above 0.05%

How Chernobyl affects you

Based on user reports from resources such as Leafly, Chernobyl can create happiness, upliftment, euphoria and relaxation, and could cause dry mouth, dry eyes, and dizziness. But really, marijuana affects people in different ways. The two main factors are your own biology (your endocannabinoid system, metabolism, age, weight, etc). and the product you choose (including its cannabinoid profile and terpene breakdown, and the delivery method used).

Chernobyl can grow both inside and outside, but outside it will produce a higher yield. It’s a pretty fast-growing plant, and should be ready to harvest in 7-9 weeks, or by early October if grown outside.

Chernobyl prefers a warm and sunny climate, and one that is well-ventilated to whisk away the moisture.

The nucleus of Chernobyl weed is formed by three strains — Jack the Ripper, Trainwreck, and Trinity. Taken together, this ancestry reads like a horror movie — stuck on a train with a serial killer, the carriage runs off the rails, and you meet the Holy Trinity, well before you wanted to.

Regardless, from these strains, we can gather where Chernobyl gets its own attributes. Jack the Ripper is known as an energetic lemon haze that provides an intense high and a citrus aroma, while Trainwreck is said to be another upbeat, potent sativa with a lemony aroma. Trinity is a rare, yet acclaimed sativa-dominant hybrid that’s known for its strong, uplifting high that can also be deeply relaxing.

Chernobyl has been used as a parent in a number of strains, such as Nuclear Cookies (a cross with Girl Scout Cookies) and Sweet Berry (a cross with Blueberry).