If you buy some peanuts and this cracker jack, then you should have no problem finding someone to take to the ballgame. You also might find baseball is a whole lot more interesting than you remember, and that hot dogs and shelled peanuts are about as good as it gets. Cracker Jack is a lively hybrid strain known for a euphoric high that could be just the pick-me up you need. And with a parentage that includes two of the most famous cannabis strains around — Green Crack and Jack Herrer — it’s no surprise that Cracker Jack is a fan favorite. 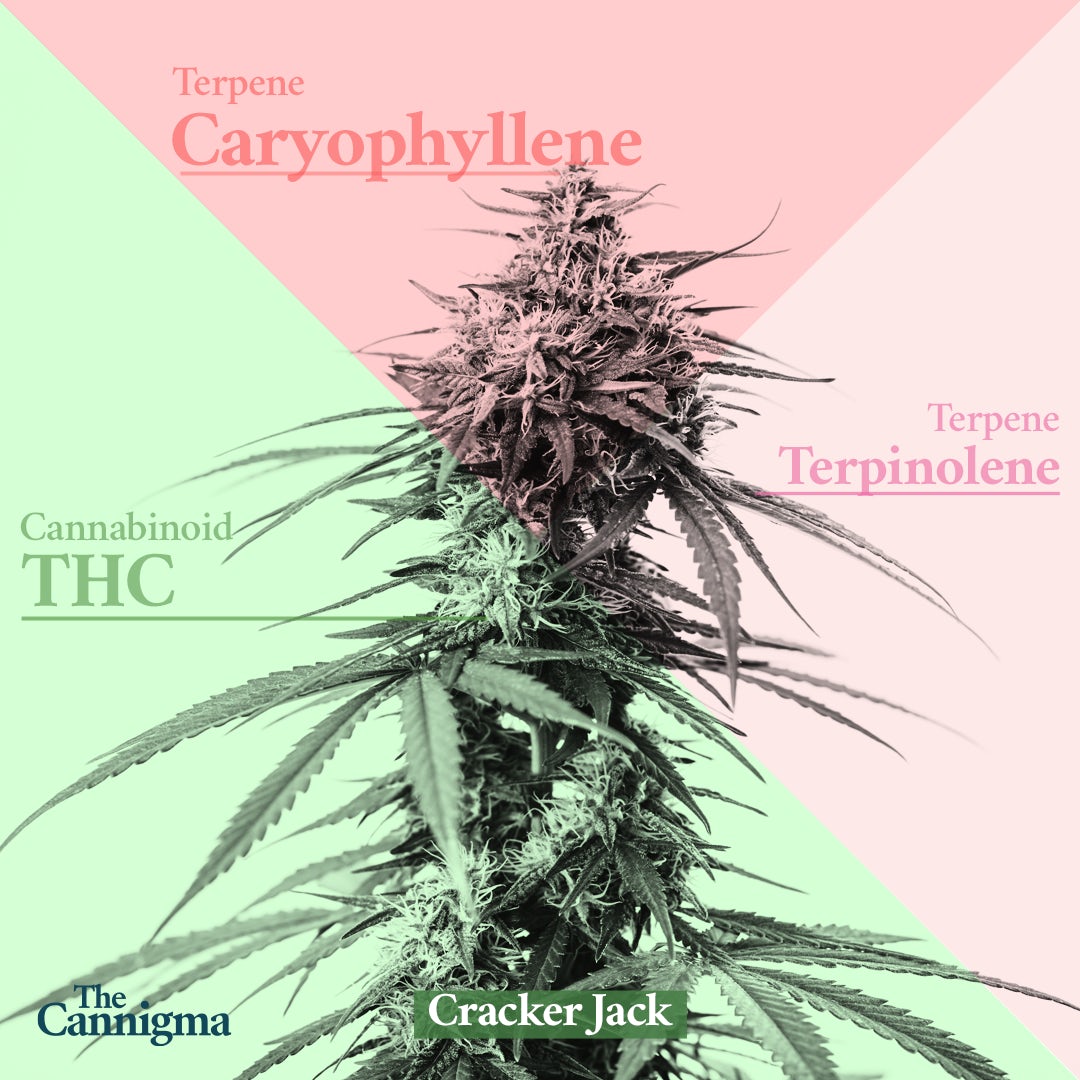 While the name evokes caramel covered popcorn and an afternoon at the ballpark, Cracker Jack actually gets its name from its parentage — the legendary strains Green Crack and Jack Herer. Both of these are sativa-dominant strains known for producing the sort of energetic high that makes them perfect for a wake-and-bake or a nice lunchtime smoke before heading out for an afternoon at the beach. And while Green Crack (perhaps befitting its name) produces a more energetic, even “racey” high, Jack Herer is a more mellow strain, creating a well-balanced mix in Cracker Jack.

California’s Tree Top Collective is credited with first breeding this strain, which mixes sweet and fruity flavors in every puff. It has an aroma that is typically described as fruity but also floral, perhaps owing to the rare prominence of terpinolene in the chemovar.

Cracker Jack is a hybrid strain that is considered about equally sativa and indica, though the effects are closer to what most consumers associate with the upbeat high caused by sativa strains. Scientifically speaking though, there is no ironclad way to know how a strain will make you feel based solely on whether it’s considered sativa or indica.

And while Cracker Jack isn’t nearly as famous as either of its legendary parents, it has built a name for itself in the cannabis world.

Cannabinoids and terpenes in Cracker Jack

Strain names can be a fun way to distinguish between different types of weed, but much like human names, they can’t really predict your experience. You might know a few Laura’s, but one might be energetic and outgoing, and the other timid and introverted. No one ever defined the characteristics of someone named Laura and the same is true with strain names. For a while people also used the sativa and indica genetics of their weed to predict the type of high it would produce, but we now know that these are botanical terms that don’t necessarily reflect at the chemical properties of the plant.

This is why looking at the chemical profile can give you a more accurate prediction of what to expect from your Cracker Jack. We gathered certificates of analysis from a variety of cannabis testing laboratories and from online resources and came up with the chemical profile below. It’s not supposed to be the definition of Cracker Jack, but rather an approximation of what you can expect when looking for this strain. One particularly impressive thing about this chemovar is its high concentration of terpinolene, one of the rarest cannabis terpenes. Other prevalent terpenes we identified are BCP, humulene and limonene. When it comes to cannabinoids, this chemovar boasts pretty high levels of THC and CBG.

Myrcene 0.1%
* The numbers in the tables are averages of data from multiple resources
** Terpenes are of pharmacologic interest at concentrations above 0.05%

How Cracker Jack affects you

Terpinolene, the most prevalent terpene in this chemovar, has shown sedative properties in preliminary research, but subjective reports from cannabis users describe their experience with high terpinolene varieties as stimulating. This could be due to the combination of THC and terpinolene, so the scientific jury is still out when it comes to the type of high weed with high terpinolene levels will create. THC concentration was relatively high in the tests we found for Cracker Jack, with very low levels of CBD to balance it, so you can expect a fairly intense high.

When it comes to the aroma of Cracker Jack, according to the above profile, it should be a mixture of floral and fresh (terpinolene), spicy (BCP) citrusy (limonene) and earthy (humulene).

Like the type of high you’ll experience, the medical conditions that could benefit from this strain largely depend on the chemical profile in your Cracker Jack. Though largely preliminary, research suggests these cannabinoids and terpenes as potential treatment for conditions such as pain, inflammation, and arthritis. Terpinolene specifically showed potential efficacy for acne and heart disease, but again these are all preclinical evidence which make them pretty weak compared to cannabis products that were clinically tested on humans.

Cracker Jack is known as an easy-to-grow chemovar that even beginners should be able to cultivate without too many headaches. Cracker Jack is known for growing well both indoor and outdoor, and is also a hardy plant that is resistant to many forms of mold or mildew. Cracker Jack prefers a dry, sunny climate and grows to a medium size with a medium yield. Simply put, this is an easy, straightforward strain to grow, and is perfect for veterans and novices alike.

Anybody who is a fan of lively but not-too-intense, fruity and flavorful sativa strains should find a lot to like in Cracker Jack. The strains it most closely resembles are its parents — Green Crack and Jack Herer — though there are no shortage of Jack Herer bred strains like Candy Jack or Black Jack which produce similar effects. Fans of fruity, potent haze strains should also find that Cracker Jack produces a similar euphoric high to lift your spirits and get your creative juices flowing.