Much like Zoe Kravitz, this strain shows that when both your parents are works of art, the odds are in your favor as well. Most commonly-described as a mix of cannabis superstar strains Sour Diesel and OG Kush, Headband is a smooth yet potent hybrid with the delicious flavor profile one would expect from its celebrity parents. And with a strong, relaxing and euphoric high – which isn’t usually as upbeat as Sour Diesel — Headband weed can get you in the right headspace throughout the day. 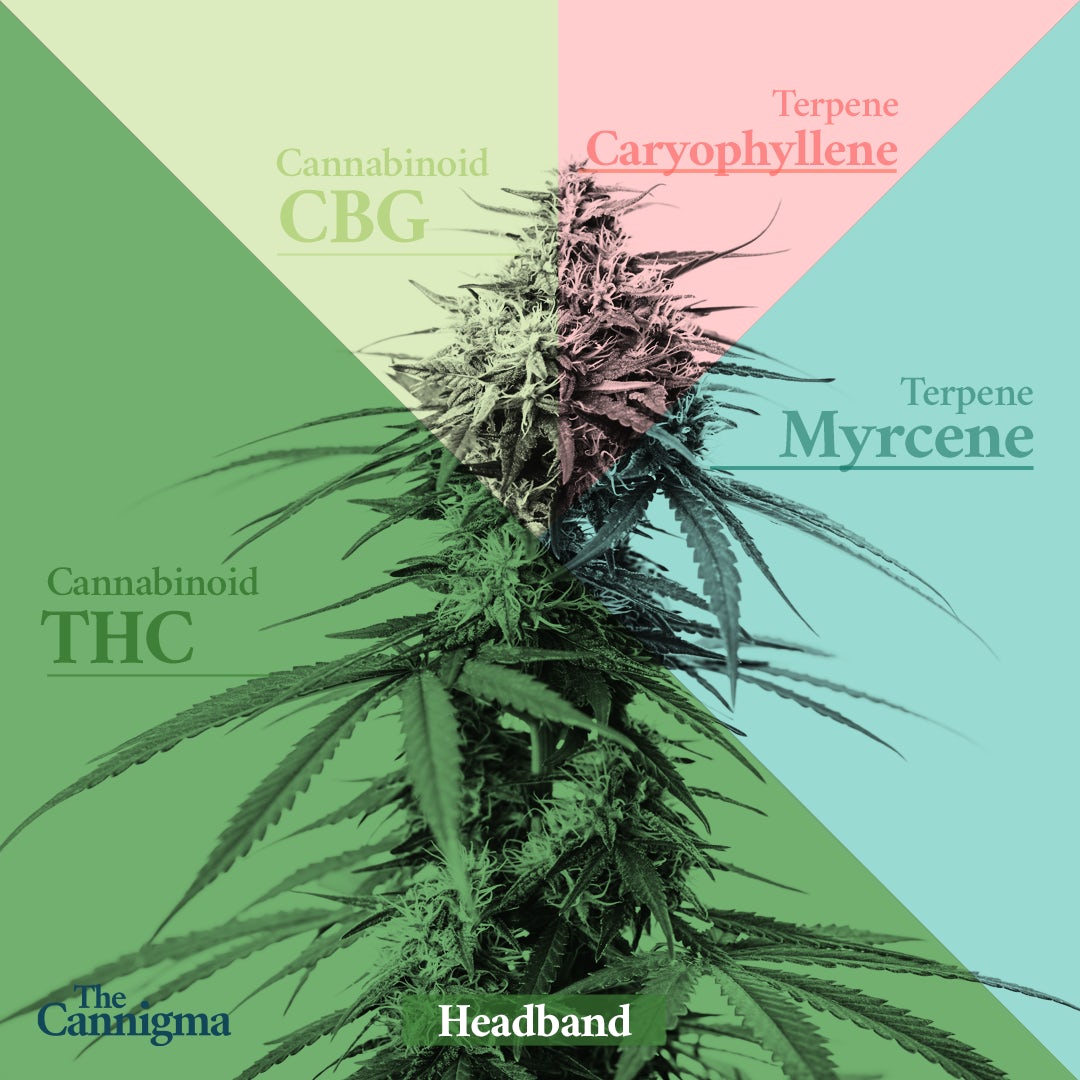 Often described as “Sourc Kush,” the Headband strain is most commonly credited to the breeders at DNA Genetics, famous for crafting such strains as LA Confidential, Kosher Kush, and Tangie.

The cannabis company describes Sour Kush, the strain “formally known as Headband” as being the result of “reversing the OG Kush to pollinate the Sour Diesel.” The company says Headband provides a high that “is completely medical and not too overpowering” and has “bag and head appeal,” due to its tantalizing aroma, beautiful buds, and “a fuely-soury taste and smell with a long lasting high.” The breeders also state that it is “a good all day smoke that won’t knock you down like some of the heavy indicas.”

The strain won 3rd place overall at the 2009 High Times Cannabis Cup, and in the decade and change since then it won no small share of dedicated fans.

Another origin story for the Headband strain traces it back to an East Coast breeder known as Weasel, who reportedly first called it Underdog, and later Daywrecker Diesel. Others cite the story of “Loompa’s Headband,” an OG Kush and Sour Diesel cross also known as Underdog OG.

The bottom line, there is a consensus that the Headband marijuana strain is a mix of OG Kush and Sour Diesel, and we’ll let the historians debate the rest.

The aroma is a pungent bouquet of diesel and citrus, and the flavor carries with it more of the same — that fully-immersive flavor of fuel and lemon that makes you want to dive into the baggie and start rearranging the furniture.

Cannabinoids and terpenes in Headband

The chemical profile you see below is an average of laboratory tests for products called “Headband” — so it’s just an estimate of what you might find when you buy Headband.

Pinene 0.16%
* The numbers in the tables are averages of data from multiple resources
** Terpenes are of pharmacologic interest at concentrations above 0.05%

How Headband affects you

One of the explanations for the name Headband is the headrush after smoking, that can make it feel a bit like you’re wearing a crown or a headband. The most abundant terpenes in Headband also may play a role in its effects: Limonene and Pinene can provide energetic effects and citrusy and earthy aromas, while beta-Myrcene and beta-Caryophyllene are more relaxing and sedative.

Based on user reports, Headband tends to produce happiness, euphoria and upliftment, and could cause dry mouth, dry eyes, and dizziness. But really, marijuana affects people in different ways. The two main factors are your own biology (your endocannabinoid system, metabolism, age, weight, etc). and the product you choose (the cannabinoid profile, the terpenes breakdown and the delivery method).

That being said, the above chemical profile could potentially help with conditions and symptoms such as pain, inflammation, insomnia, arthritis, multiple sclerosis, stress, depression, acne, dementia, parkinson’s and IBD (crohn’s disease and ulcerative colitis).

Headband is a relatively easy to grow strain that can be grown both indoors and out, though it prefers dry and warm climates where humidity is kept in check.

The strain does have a tendency to sprout small popcorn size buds, which is part of why it can have a relatively low yield. Careful and attentive trimming can help improve yields and bud size.

Headband flowering time is about 9-10 weeks, and if grown outside you should expect around 18 ounces per plant by mid-October.

Headband draws a great deal of its effects, flavors, and aroma from its star-studded parentage. Fans of OG Kush and Sour Diesel (i.e., most everyone) should find a lot to love here, as will anyone who likes well-balanced strains that combine the relaxing qualities of a kush with the energetic vibe of diesel strains. Wedding Cake is a highly-popular hybrid strain with a similar terpene profile that can be both energizing and relaxing, while Super Sour Diesel, a cross of Sour Diesel and Super Silver Haze provides a lot of the same package as Headband, with a slightly more upbeat drive.

Ask the Expert Can I substitute coconut oil for vegetable oil in weed gummies?
Previous Article Forbidden Fruit Next Article Acapulco Gold
The Cannigma uses cookies to improve your experience and to show you personalized adsACCEPTPrivacy Policy
Manage consent