If Adam and Eve had just smoked the Forbidden Fruit weed instead of eating from the Tree of Knowledge, then we could probably all understand why they thought it was worth getting kicked out of paradise. A potent indica-dominant hybrid replete with fruity flavors and citirusy aromas, the Forbidden Fruit strain is a hit at any (garden) party, but also just perfect for kicking back at night, wondering about the meaning of life as you drift off on a cloud of your own design. 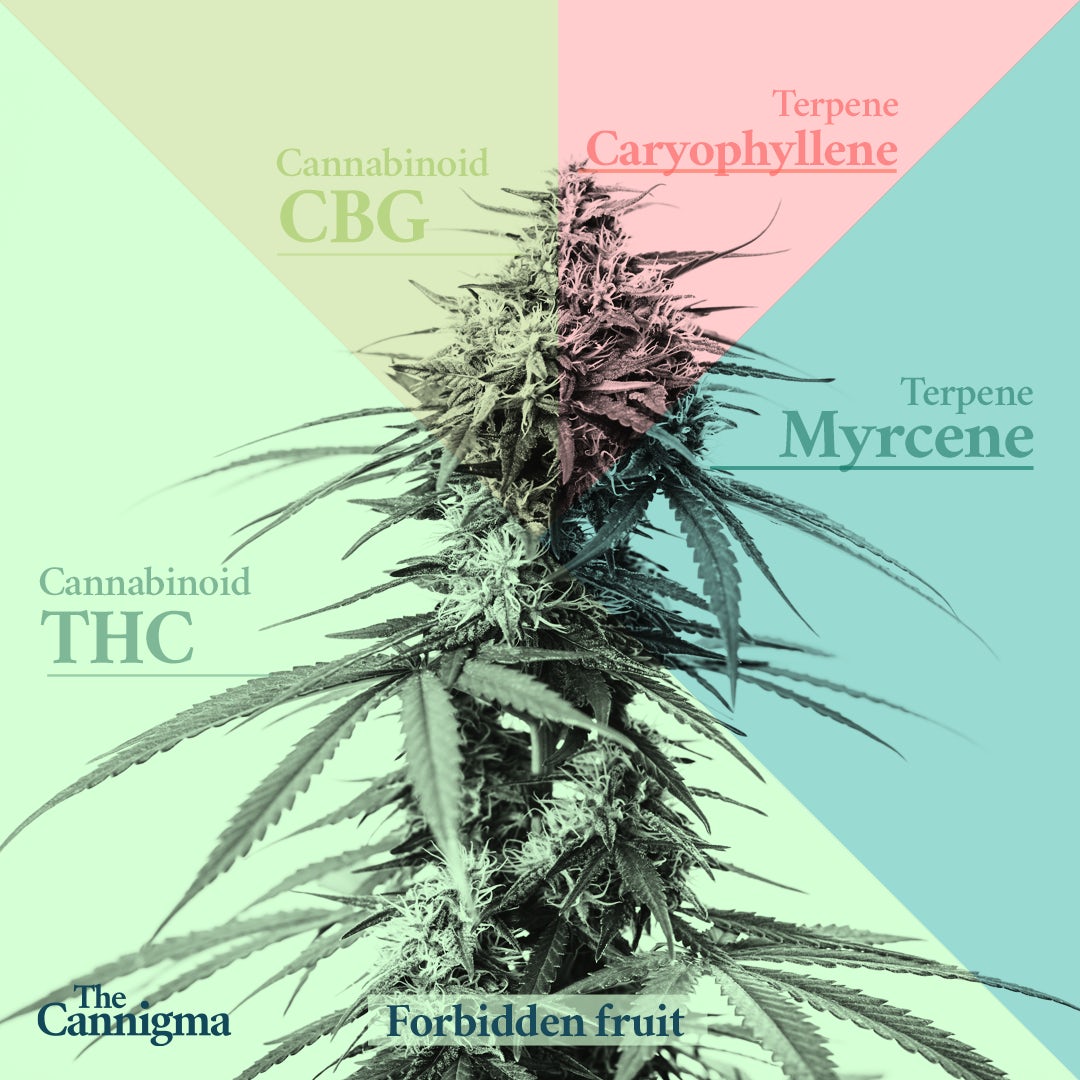 Scholars differ on the origin of the Forbidden Fruit strain, though it is often credited to the team at Chameleon Extracts, who say on their website that the strain “is a mix of Cherry Pie and Tangie created by UrbanGardener408 of Chameleon Extracts, with some of the most beautiful batches of flower coming from Evergreen Acres.”

Meanwhile, Cannabis Now traces Forbidden Fruit back to the Bay Area, and a breeder named Joseph from Chameleon Extracts, who told them that he bred Forbidden Fruit in 2016 by dusting a Tangie plant with pollen from Cherry Pie. Out of the resulting 37 phenotypes, Joseph was “able to narrow it down to one winning phenotype,” and he apparently didn’t even need to take the 7th day off to rest.

“The one that we ended up keeping was purple from the beginning and that was how we ended up keeping the first one,” Joseph told Cannabis Now, adding that “out of the 37, it was the only one showing any color at all. There was a couple that maybe smelled a little better, but it had that visual appeal I knew people would enjoy. But it tastes like Tangie all the way through. It had the Pie look, it just tasted like Tangie.”

The mother Tangie plant used to grow Forbidden Fruit was cut from the breeders at Crockett Family Farms and can reportedly be traced back to the mid-90s, according to Cannabis Now.

The strain is described as having a purple hue with green and orange fibers, a pungent fruity aroma, and a euphoric high that makes you want to stroll around in any garden, no matter how far it is from Eden.

But let’s get back to that parentage. Tangie is a brilliantly flavorful citrusy strain mixed by crossing California Orange and Skunk, which has won contest after contest in the cannabis world. Cherry Pie is a dreamy strain bred by Jigga, the same breeder who grew the blockbuster strains Girl Scout Cookies and Gelato. Jigga created Cherry Pie by crossing Indica-legend Granddaddy Purple and Durban Poison — one of the most famous landrace strains of all. Now, imagine you take these two incredible strains and mix them together? Tangie Pie? That would make sense, but wouldn’t work as well as Forbidden Fruit, a name that conjures up just how unique and delightful this strain is.

Cannabinoids and terpenes in Forbidden fruit

The chemical profile you see below is an average of laboratory tests for products called “Forbidden Fruit” — so it’s just an estimate of what you might find when you buy Forbidden Fruit.

Linalool 0.15%
* The numbers in the tables are averages of data from multiple resources
** Terpenes are of pharmacologic interest at concentrations above 0.05%

How Forbidden fruit affects you

Based on user reports, Forbidden Fruit tends to produce relaxation, happiness, euphoria and sleepiness, which makes sense seeing that it’s high in myrcene and BCP — two sedative and calming terpenes. Commonly reported side effects of  Forbidden Fruit are dry mouth, dry eyes, and dizziness, but marijuana affects people in different ways. The two main factors are your own biology (your endocannabinoid system, metabolism, age, weight, etc). and the product you choose (the cannabinoid profile, the terpenes breakdown and the delivery method).

That being said, the above chemical profile could potentially help with conditions and symptoms such as pain and migraines, insomnia, stress and dementia.

According to Joseph from Chameleon Extracts, Forbidden Fruit is a strain that doesn’t really take too much of a heavy hand. As he told Cannabis Now “the genetics are so strong that you don’t have to push it,” adding that it’s the type of strain “that you can literally throw it in the ground and hit it with a garden hose and you’re going to be extremely happy with the results.”

Joseph is by no means the only grower cultivating Forbidden Fruit, which is often described as being of medium difficulty to grow, with a relatively high yield of around 3 ounces per square foot. It is also considered to be rather low maintenance, and not very susceptible to pests, disease, mold or mildew.

Though Forbidden Fruit is an indica-dominant hybrid it has a mix of effects that can be both relaxing but also euphoric and uplifting. In this sense it’s similar to its parent strain Cherry Pie, which combines the relaxing effects of Granddaddy Purple with the upbeat tempo of Durban Poison. Like Tangie, it is a highly-flavorful fruity strain that puts flavor and aroma front and center in the smoking experience. Overall, it should be a welcome strain for people who like flavorful, potent strains that aren’t too sedative or too racy.