The cannabis world is full of strains that were created by breeding two marquee chemovars — but few can touch the pedigree of Blue Cookies. A cross of Blueberry and Girl Scout Cookies, the Blue Cookies strain (also known as “Blueberry Cookies”) is an indica-dominant hybrid that produces a very potent, well-balanced euphoric and relaxing high and the sweet and fruity flavor Blueberry is known for. 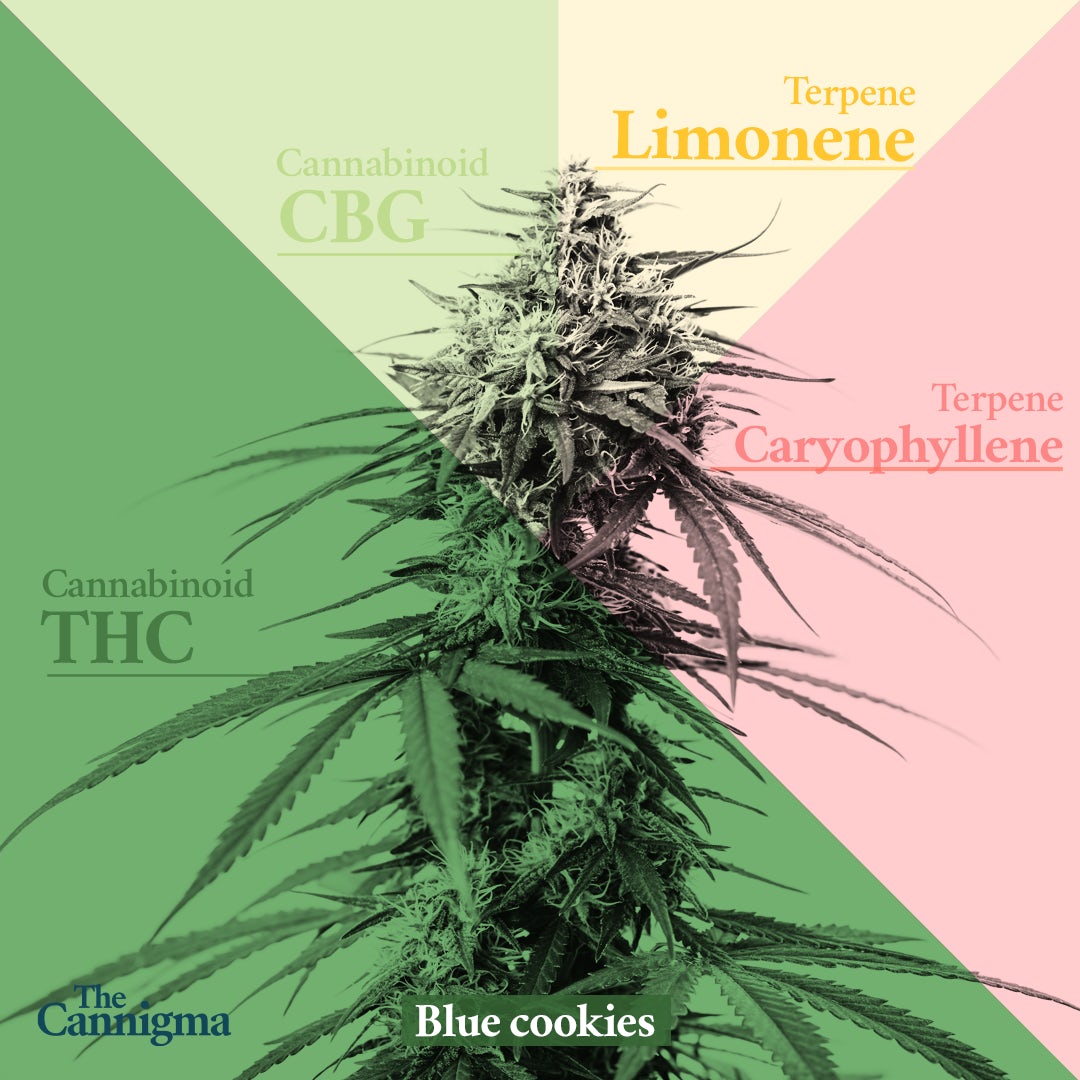 There isn’t a single agreed-upon inventor of Blue Cookies, but that makes sense for a strain that combines two highly-famous chemovars that are household names in cannabis, and which countless growers over the years could have decided to cross on a whim. It’s often said to have originated on the West Coast, specifically in Washington state, like many a classic strain.

Its parent strain Girl Scout Cookies (or GSC) is easily one of the most acclaimed and influential strains on earth, and one that has been used in countless strains, spreading its genetics throughout the cannabis world. That strain originated in the Bay Area, where it was bred by the Cookie Family collective, who are also behind strains like Gelato and Cherry Pie. GSC is typically described as a mix of the classic landrace Durban Poison and the West Coast cannabis icon OG Kush.

Blueberry, on the other hand, is an indica landrace that first hit the scene in the late 70s, and won the hearts and minds of countless stoners due to its strong, tranquil high and delicious sweet and fruity flavors.

Looking at the origins of Blue Cookies’ parents one can understand why it’s a popular strain — but that doesn’t tell the entire story. Blue Cookies is also very potent, and regularly clocks over 25% THC, making it a strain that might not be ideal for beginners.

Blue Cookies is also known for having great “bag appeal,” with big, dense buds that are green with hues of blue and purple and a ton of trichomes. It’s a similar appearance to Blueberry, which has dense buds that often feature a prominent purple shade to them.

The flavor profile of Blue Cookies is appealing and complex, combining fruity flavors that are described as everything from grape to cherry to orange — and even candy. Basically, a taste that’s as sweet as the high.

The chemical profile you see below is an average of laboratory tests for products called “Blue cookies”— so it’s just an estimate of what you might find when you buy Blue cookies weed. It consists of a high THC concentration, averaging at 21%, relatively high CBG (1.1%), a modest amount of BCP (0.6%) and limonene (0.5%), and slightly lower concentrations of humulene (0.2%) and linalool (0.2%).

Linalool 0.2%
* The numbers in the tables are averages of data from multiple resources
** Terpenes are of pharmacologic interest at concentrations above 0.05%

Based on user reports, Blue Cookies is very often described as a relaxing “indica” strain that can also produce happiness and euphoria. Commonly described adverse effects are dry mouth and dry eyes. But really, marijuana affects people in different ways. The two main factors are your own biology (your endocannabinoid system, metabolism, age, weight, etc). and the product you choose (including its cannabinoid profile and terpene breakdown and the delivery method used).

Blue Cookies is considered a moderately-difficult strain to grow, mainly because it requires careful pruning and also because seeds can be hard to come by — so your only option might be to get your hands on a clipping. It also may require setting up a support system initially during the grow.

The strain can grow both outdoors or indoors, and it can thrive in a warm climate with a little bit of humidity — as well as in colder locales. Exposing it to colder weather during the grow will help it develop more of a purple hue.

The strain grows from a short height of around three feet to about five feet tops. It has a relatively short flowering time of 8-9 weeks, and provides an ample yield of about a pound if grown outside.

Blue Cookies bears similarities to the countless strains with “cookies” in the name that are derived from Girl Scout Cookies phenotypes. The same goes for the constellation of strains with “blue” in the name that were bred using Blueberry. Monster Cookies for instance (not to be confused with Cookie Monster), is a combination of GSC and Granddaddy Purple, an acclaimed indica with purple hues and a deeply relaxing high that isn’t far off from what Blueberry may have you feeling.

Blue Cookies itself was used to breed Blue Sherbert, a cross with Sherbert. The latter is a highly-acclaimed strain that was bred by Mr. Sherbinski, the same Bay Area breeder responsible for creating the Gelato strain in collaboration with Cookies Fam — who first bred GSC. A family affair indeed.

Seedfinder also cites strains such as Birthday Blues (a cross with Birthday Cake) and Bluetopia (a cross with Fruitopia) as just two of several strains that have been bred using Blue Cookies.