Relaxing yet cerebral and social, Do Si Dos (or Dosidos) is a hybrid strain with Girl Scout Cookies lineage (hence why it shares the name of the popular peanut butter Girl Scout Cookie). Do Si Dos has quite the pedigree and can be potent and pungent, and the perfect accompaniment for a quick round of square dancing or just an hour or two on the couch pigging out on some peanut butter cookies. 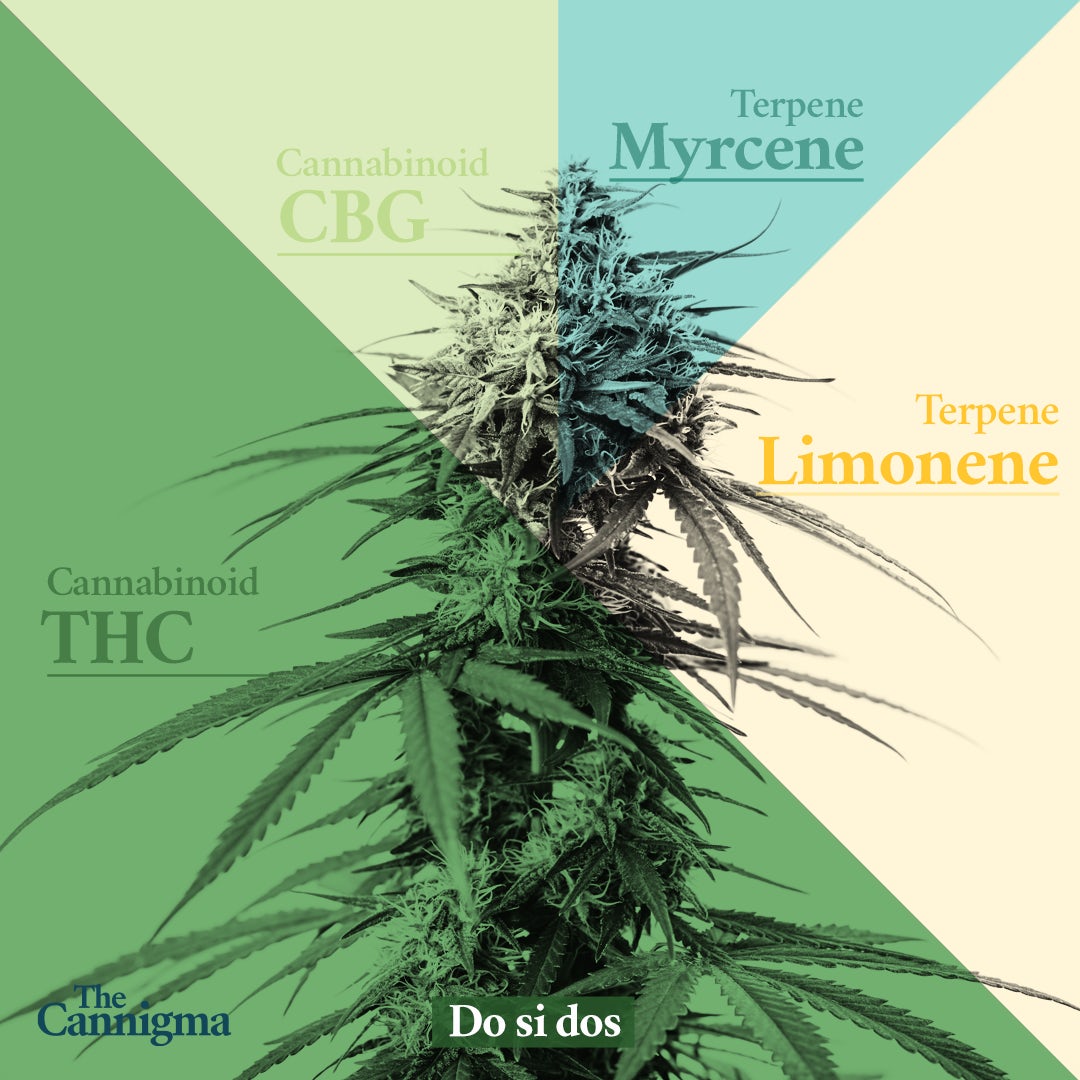 This indica-dominant hybrid is a cross of the Girl Scout Cookies (GSC) phenotype OG Kush Breath and Face Off OG.

The exact origins of OG Kush Breath are unknown, but it has been described as a cross of GSC with Durban Poison or OG Kush. ch

Oregon’s Archive Seed Bank describes Do-Si-Dos as OGKB X Face OFF OG BX1. Archive Seed Bank is often credited with being the originator of Face Off OG, described as an offshoot of “a powerful and fragrant OG Kush strain.” Leafly, on the other hand, traces the origin of Face Off OG to Archive Seeds, which says it was given an exceptional OG Kush phenotype in the 1990s, around the time the 1997 Nicholas Cage and John Travolta movie came out. The growers also liken the effect to the title of the film, saying that it includes “dizzying euphoria” that goes straight to your head and is probably best for more seasoned cannabis users.

But what about Do Si Dos? It’s also a high powered strain that can produce a strong rush of euphoria and a chill body high. It’s not too fast or too slow, just a really nice stoney strain that can be social and relaxing, and perfect for after the end of the workday.

The taste of Do Si Dos is often described as a mix of fruity and skunky, though others say it brings to mind mint, citrus, and earthy flavors. This is also a pungent strain that will announce your arrival downwind.

Cannabinoids and terpenes in Do Si Dos

Humulene 0.15%
* The numbers in the tables are averages of data from multiple resources
** Terpenes are of pharmacologic interest at concentrations above 0.05%

How Do Si Dos affects you

Based on user reports, the Do Si Dos strain is often relaxing, euphoric, sleepy or uplifting. These seemingly conflicting reports may be attributed to varying amounts of the terpene limonene vs myrcene and linalool, which are both thought to be more sedating. Do Si Dos can sometimes cause dry mouth, dry eyes and dizziness.

But really, marijuana affects people in different ways. The two main factors are your own biology (your endocannabinoid system, metabolism, age, weight, etc) and the product you choose ( including its cannabinoid profile and terpene breakdown, and the delivery method used).

Do Si Dos is considered a moderately-difficult strain to grow, and one that enjoys somewhat humid and warm climates.

It’s a pungent strain that requires good ventilation, and has a flowering time of 8-10 weeks if grown indoors, and a harvest time of late September to early October if grown outdoors.

Like Girl Scout Cookies, many sites describe Do Si Dos as not being a very high yield plant, though some say otherwise.  Do Si Dos grows average height, and exposing it to cold weather can bring out the purple coloring.

Do Si Dos has a lineage that includes Girl Scout Cookies and OG Kush, two of the most popular and ubiquitous cannabis strains for some time now. It is also believed to have some shared genetics with Durban Poison, one of the most famous landrace sativas anywhere.

Do Si Dos is one of the parent strains of High Five, an energizing hybrid crossed with Tahoe OG, and according to Seedfinder, was used to breed a growing list of strains, including Ros’e (a cross with Unicorn), Citrus Rush (a cross with Skunk Tangerine), and Diesel Dough, a cross with the powerhouse cannabis mainstay Sour Diesel.