Who cares if you get invited to the ball when you have some herb like this? Cinderella 99, also known as C99 or Cindy strain, is a sativa-dominant hybrid that creates an energetic, potent yet not too foggy high, and feelings of euphoria. It has fruity flavors and a happy high, but it’s probably too chill for a morning spent doing chores for your stepmother, and more for when you’re on the couch after the clock strikes midnight. Prince Charming can wait. 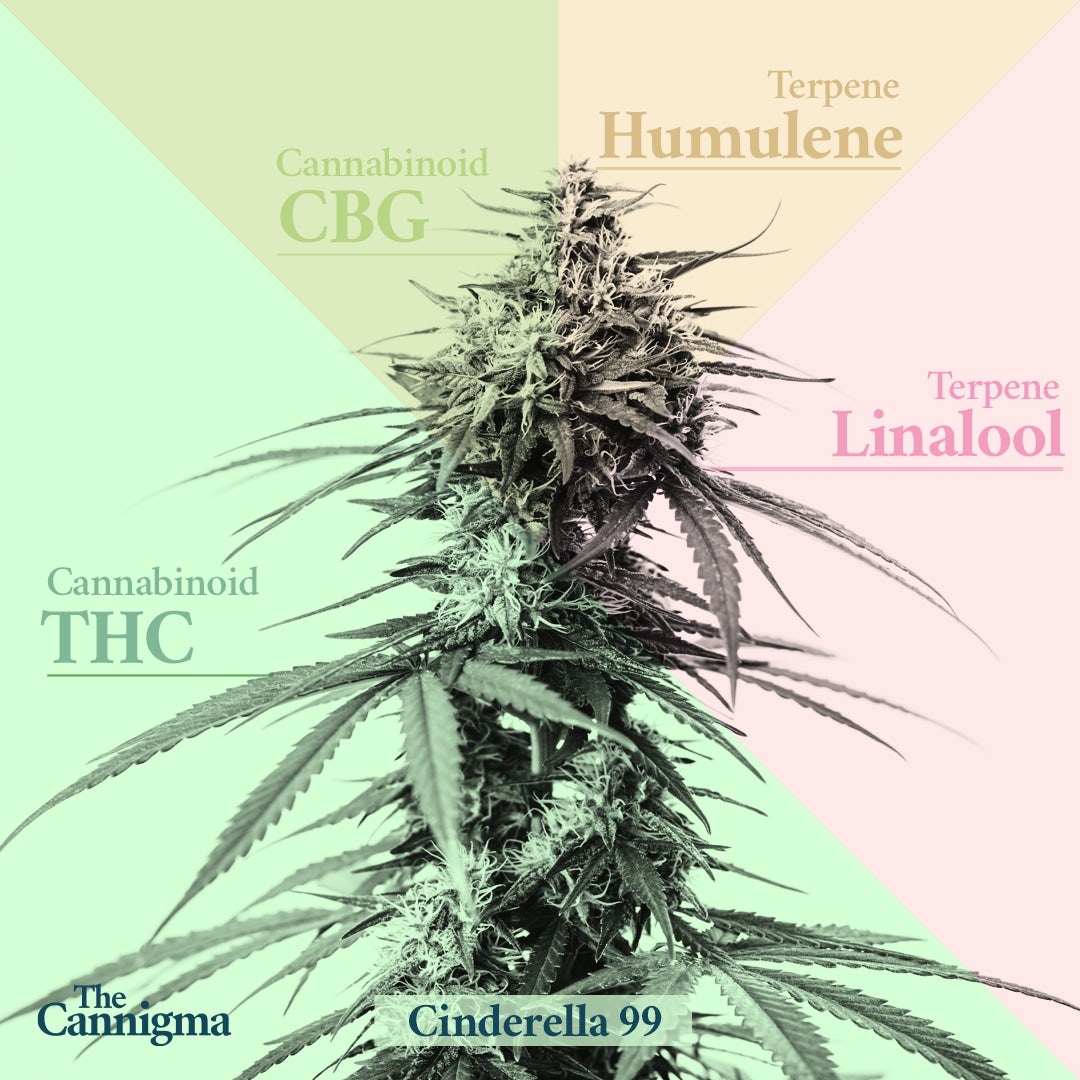 This princess of the cannabis world was reportedly first grown by the breeder Mr Soul at Brothers Grimm, who said that he created Cinderella 99 in 1999, and that the dried flowers “are rich in terpenes, ranging from sweet tropical fruit to stinky rotten cheese which occasionally occurs all in the same bud. The flavors and aromas are sublime, and of course, the high is psychoactive yet clear.”

The breeders also describe the high as “you’ll feel like getting creative, playing music, or making art.”

And how does Cindy 99 taste? According to the breeders themselves, “on the nose, you get a Hawaiian Punch scent but with a funky body odor undertone. When you light it up, that fruity flavor hits your taste buds first, followed by the funky aftertaste. The high is smooth, strong and energetic, however, it can also be paranoia-inducing, depending on your mood and setting.”

The breeders describe the lineage of the strain as Princess + P94.

In a 2018 interview, Mr Soul — who has an MA in nuclear engineering — traced this fairy tale back to the Netherlands in the mid-90s. Mr Soul said that in 1996 he grew some seeds he found in a bud of Jack Herer he bought at Sensi Smile coffee shop in Amsterdam. One of these seeds produced a female Mr Soul named “Princess,” who he said “had a devastatingly psychoactive resin and stayed short, compact and had a heavenly aroma of tropical fruit and rotten meat.”

By carefully working with Princess — using a process called cubing — Mr Soul was eventually able to create the Cinderella 99 strain.

In a separate interview with Mr Soul, he said “I wanted to add a little strength to her branches because the buds were always so heavy at harvest that the branches flopped over. To do that, I crossed a heavy-yielding, dense, resinous Sensi Shiva Skunk female with one of the males grown from the same group of seeds that produced Princess.”

Many sites describe the strain as a mix of Jack Herer and Shiva Skunk, though all of them speak of this strain in the hushed tones of reverence.

Cannabinoids and terpenes in Cinderella 99

The chemical profile you see below is an average of laboratory tests for products called Cinderella 99— so it’s just an estimate of what you might find when you buy a Cindy. Though often described as a sativa-dominant strain, the chemical breakdown we’ve identified is high in terpenes considered to be sedative, particularly because of the linalool and BCP.

Pinene 0.19%
* The numbers in the tables are averages of data from multiple resources
** Terpenes are of pharmacologic interest at concentrations above 0.05%

How Cinderella 99 affects you

Based on user reports, C99 tends to produce happiness, euphoria, upliftment and energy. It could also cause dry mouth, dry eyes, paranoia and anxiety. But really, marijuana affects people in different ways. The two main factors are your own biology (your endocannabinoid system, metabolism, age, weight, etc). and the product you choose (the cannabinoid profile, the terpenes breakdown and the delivery method).

According to Brothers Grimm, Cinderella is a fast-flowering plant that needs plenty of light and nutrients (for instance, silica, calcium, and magnesium) and should be ready to harvest in 8-9 weeks.

The breeders state that the strain can reliably produce 16 ounces per plant if grown outdoors, and about 4-8 ounces per plant indoors. It will grow to about 48 inches by harvest time, and the short, bushy nature of the plant, along with its generous yield have made it a grower’s favorite. The Brothers Grimm assessment is actually lower than many that can be found online — which state that it can easily yield around two pounds when grown outdoors.

It has also been described as “a gem of cannabis engineering,” a sativa-dominant hybrid that grows short and bushy, with long, thick central colas, a very high calyx-to-leaf ratio, and a generous yield. With its short stature, it can easily be grown in locations where space is at a premium — and it can do so with a very quick flowering time.

It prefers a warm and sunny climate, and is said to be highly-resistant to mold, disease, and pests.

Much like the fairytale princess, the birth parents of Cinderella 99 are a bit tough to track down. The strain was originally grown using Jack Herer seeds, which could explain its invigorating and euphoric high. The parent strain Princess is also a compact, resin-coated, and highly-potent strain, much like Cindy.

Another strain that is apparently in Cinderella 99’s genetics, Shiva Skunk, is a highly-potent Skunk strain mixed with Northern Lights that is known for its short stature, high yield, and tranquil high — all of which bring to mind Cinderella 99.

Ask the Expert Can I substitute coconut oil for vegetable oil in weed gummies?
Previous Article Skywalker OG Next Article Berry White
The Cannigma uses cookies to improve your experience and to show you personalized adsACCEPTPrivacy Policy
Manage consent