You don’t have to be a theoretical physicist to understand the draw of Stephen Hawking Kush – a high-CBD hybrid strain meant to relieve pain and stress, and known for its sweet, fruity aroma and taste. Stephen Hawking (the strain) has grown in popularity as a go-to remedy for medical cannabis patients, and according to the growers who bred it, it can be effective in the treatment of muscular dystrophy, epilepsy, ADHD, anxiety, muscular sclerosis, auto-immune disorders, and more, without making you feel like you slipped past the event horizon of a black hole. 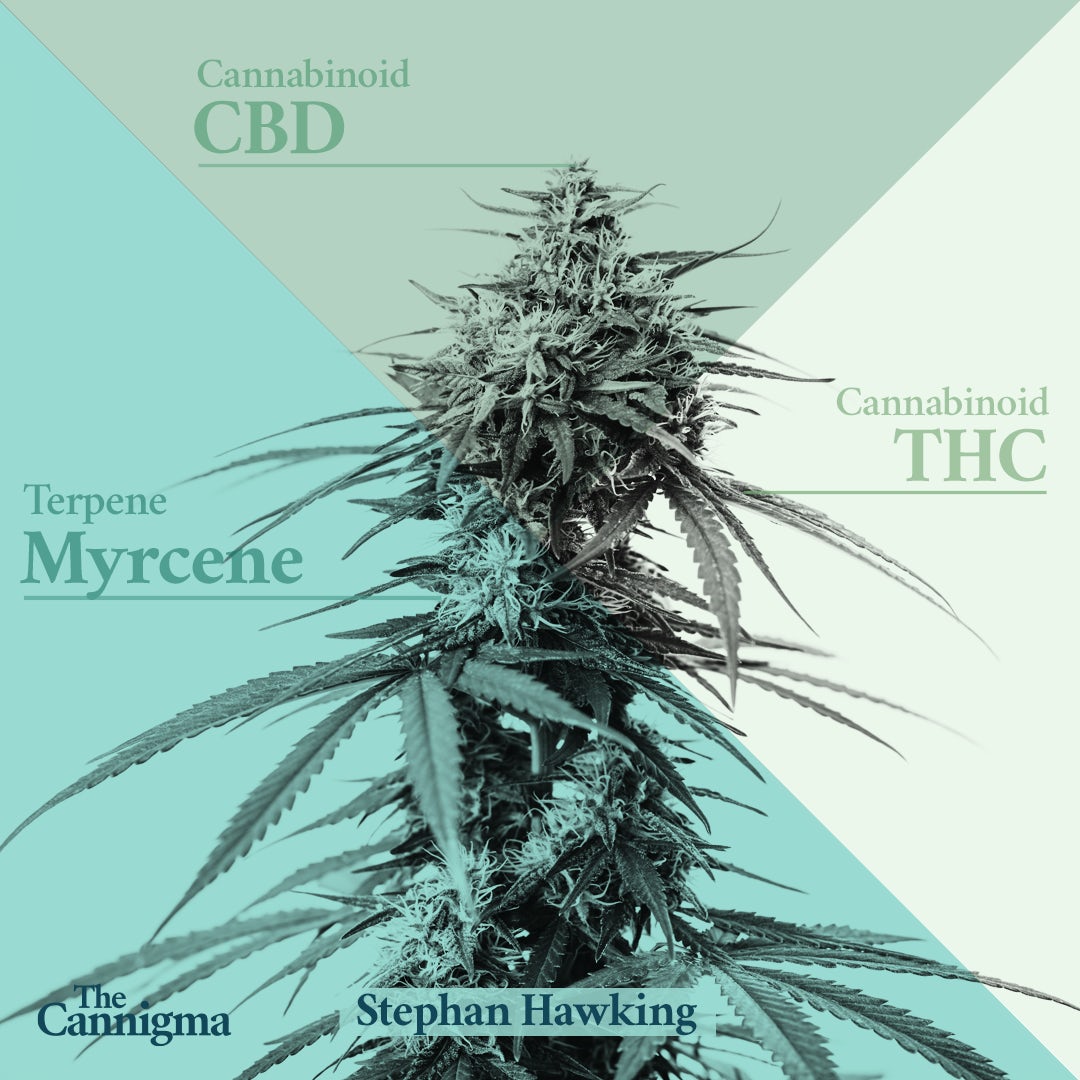 And now, for A Brief History of Stephen Hawking Kush. SHK is one of the prized creations of the seed house Alphakronik Genetics, who made it the second release in their “Great Minds” series – along with strains named after Nikola Tesla, Ada Lovelace, and Alan Turing, among others.

According to Alphakornik, the chemovar was created by breeding the high-CBD strain Harle-Tsu (a cross of the high CBD strains Harlequin and Sour Tsunami) with a male plant of Sin City Kush, itself a cross of the chemovars Las Vegas Purple Kush and Snowdawg BX.

The breeders describe the chemovar as having three distinct phenotypes, including one that is “tall and stretchy” with heavier yields and more CBD, one that is smaller and shaped similar to a pine tree, and a third that is something of a mix of the other two.

The chemovar is a 70/30 indica dominant hybrid, and the plant often has purple leaves, due to its Las Vegas Purple Kush lineage. And while it’s known for being a relaxing strain, the fact that it’s predominantly indica doesn’t mean you should expect specific effects. In fact, scientifically speaking, there is no proof that the effects of a strain are due to its being either a sativa or indica.

And while taste may not be as rigorous a science as general relativity, time and again people who have used SHK describe it as having a sweet and fruity aroma, and a taste that’s like berries, or as Alphakornik described it, “Cherry Ludens” with a berry finish. Luckily though, it’s a lot easier to smoke SHK than it is to keep a throat lozenge lit. Unlike your average cough drop, SHK is known for producing vibrantly-colored flowers, with orange, pink, and purple hues.

The traditional way of choosing your weed by its sativa or indica properties, or simply by the strain’s name was useful for years. But, technology, science and regulation developed in such a way, that today we know that a cannabis variety’s effects can’t be predicted by its sativa/indica origins, and that strain names are given sporadically by breeders. Meaning that a chemovar’s name doesn’t necessarily reflect the chemical profile of the final product.

And since this chemical profile is the main factor that determines how you’d react to your marijuana or for what conditions and symptoms it could treat, it’s important to get educated about the main cannabinoids and terpenes you’re likely to encounter in cannabis. Asking your budtender for the certificate of analysis of the product you’re examining, and then making an informed decision, can make your experience with marijuana more effective, enjoyable, and economical.

The following are the dominant cannabinoids and terpenes in Stephen Hawking, and their  average concentrations, derived from third party laboratory tests. These numbers aren’t intended to define the chemical structure of this chemovar, but rather provide you with an approximation of what you can expect when you encounter it the next time you’re at a dispensary.

Terpinolene 0.02%
* The numbers in the tables are averages of data from multiple resources
** Terpenes are of pharmacologic interest at concentrations above 0.05%

How Stephen Hawking Kush affects you

It’s hard to tell from the profile we identified how Stephen Hawking could affect you; the CBD:THC ratio is likely to create calming effects with little to no intoxication (depending on your tolerance). The only dominant terpene is myrcene, which means the calm and relaxation of these cannabinoids could be enhanced by its sedating properties.

If the Stephen Hawking Kush you get has higher ratios of the other terpenes the effects may vary. For instance, the highest concentration of pinene, a terpene known for its focusing and memory-altering properties, was of 0.1%, which is high enough in order to affect your cannabis experience.

In terms of the potential therapeutic properties of SHK, this cannabis chemovar could help with conditions and symptoms such as dementia, depression, arthritis, inflammation and pain.

According to Alphakronik Genes (who might know how to grow this chemovar better than anybody), SHK “likes to grow extra tall” and you should give it extra room for root growth when it first starts flowering. Of the three phenotypes of SHK, the tallest one produces the heaviest yields, according to Alphakronik.

This chemovar is known to be easy to grow with one of the shortest times to flower – between 7 and 8 weeks according to Alphakronik Genes. It is not a highly sensitive plant, though it grows better if trained and topped constantly during the vegetative stage. It also grows somewhat better indoors, and prefers a semi-humid climate kept at around 70-80 degrees.

Users who are familiar with high CBD, low THC strains should find the feeling and effects of Stephen Hawking Kush. For a more direct comparison though, the most similar strains are those very ones that SHK was derived from.

Like Harle-Tsu, it is a high-CBD chemovar with a sweet flavor known for bringing on a relaxing sensation. And like the Harlequin CBD strain used to breed Harle-Tsu, it’s a colorful strain that’s beautiful to look at (Harlequin was named as such because of its colorful appearance). It can also produce a hashy and musky aroma, likely due to the afghan roots of Harle-Tsu.

And much like its parent strain Sin City Kush, SHK is an indica-dominant chemovar with purple coloring and a sweet taste, with a knack for bringing users to a relaxing state of deep relaxation.