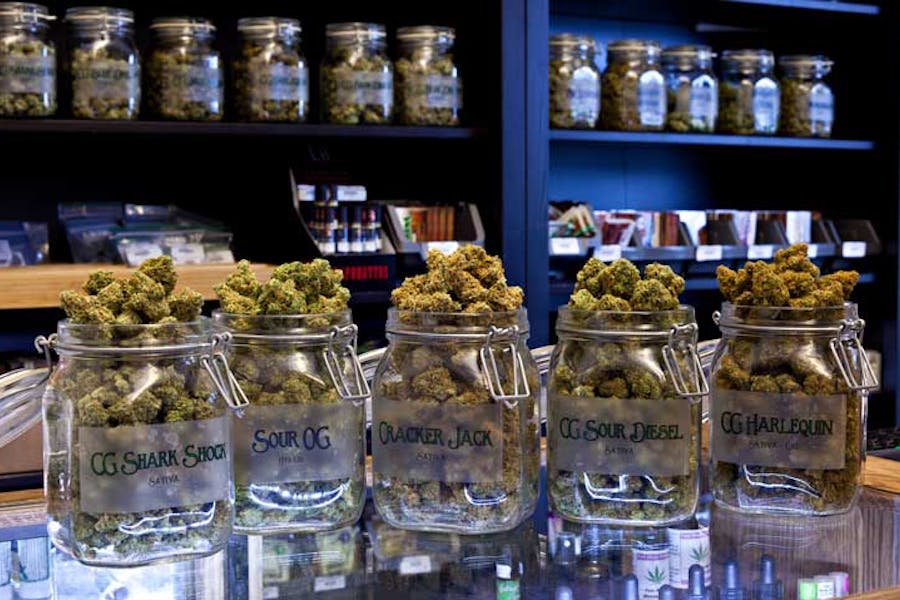 Jars of medical marijuana in a dispensary. (Shutterstock)

What happened when researchers took thousands of cannabis samples representing 396 strain names to a laboratory? The analyzed samples turned out to be a whopping three distinct chemical clusters. From the analysis, the scientists concluded that the strain name of a particular type of cannabis basically doesn’t mean much of anything at all.

“The very limited variability in chemical profiles shows that most of these chemovars, while named differently, are almost the same or at least very similar,” the researchers wrote in the study, which appeared in Cannabis and Cannabinoid Research last month.

To perform the study, the researchers collected over 2,600 samples of cannabis flower in Nevada between January 2016 and June 2017, when the state still only had a medical marijuana program. They measured the chemical profiles by way of a third-party testing laboratory, which analyzed the cannabinoid and terpene content in each sample.

Altogether, the researchers found that when analyzing the cannabinoid profiles, 93% of the samples could be grouped in the same cluster (out of a total of three clusters). Regarding terpenes, there were three distinct clusters, representing 59%, 33%, and 8% of all samples. Each cluster had a specific, most abundant terpene, either β-myrcene, γ-terpinene, or limonene, respectively.

“When analyzing the chemical testing data using a variety of statistical methods, we found that there was surprisingly little variability in the chemical profiles among the 2,662 dried flower samples,” the researchers stated. Later in the report they stated that when looking at the cannabinoid composition, “except for the few high-CBD samples, all samples contained a very high amount of THC (>22% on average) and very small amounts of other cannabinoids.”

The researchers said they assume that the terpene composition “is much more indicative of the sample’s origin and genetic background than the cannabinoid profile. The link between the terpenoids and the three clusters makes sense because the terpenes provide the colors and smells that differentiate the many varieties of cannabis.”

“The three chemovars and twelve genotypes reflect low medical diversity on the market in Nevada during its ‘medical use only’ phase. Furthermore, the 396 breeder-reported sample names within this set imply a false sense of diversity of products in Nevada dispensaries,” the researchers wrote in their conclusion.

The researchers outlined the lack of standardization in cannabis strain names, saying that they are “poorly or not at all defined” and that this “creates a confusing situation for patients, who depend on the identifications and potency data on the packaging. If the commercial names bear little consistent relationship to either genotype or chemical phenotype, then they should not be the primary basis provided to patients for decision-making.”

The lab results led the researchers to conclude that when creating new cannabis chemovars, breeders primarily select for high THC levels and that “all the other cannabinoids seem to have been mostly ignored in the breeding efforts, even though they have known or suspected specific medical values.”

If the names of cannabis chemovars were linked to the chemical signature of their active ingredients, doctors could make recommendations with better confidence, the researchers wrote, adding that a lack of patient and physician education on the medical benefits of other cannabinoids and terpenes may be part of the reason why high-THC strains dominate the market.

In a recent episode of the Cannabis Enigma podcast, cannabis researcher Dr. Ethan Russo said that the cannabis industry has focused heavily on producing high-THC strains that are also very high in the terpene myrcene, which is believed to have a sedating effect. This creates a situation in which consumers and medical marijuana patients are not able to truly access cannabis that presents a wide range of cannabinoids and terpenes.

“Part of this is a problem with breeding practices. The market is very much related to high-THC chemovars,” Russo said, noting that the recreational market dwarfs the medical market these days.

Russo also stated that the name or the appearance of the chemovar isn’t an accurate way to really grasp the makeup of the cannabis in question.

“We have to know what’s in it, what are the predominant cannabinoids and terpenoids, and then we’d have a good idea of what to expect in terms of results or effects when people use that chemovar,” he said.

Previous Article Playboy thinks CBD can close the ‘orgasm gap’ Next Article Cannabis science’s biggest names, on one stage
The Cannigma uses cookies to improve your experience and to show you personalized adsACCEPTPrivacy Policy
Manage consent