Home Research
Why a standardized cannabis dose is a bad thing. And a good thing
7 min read 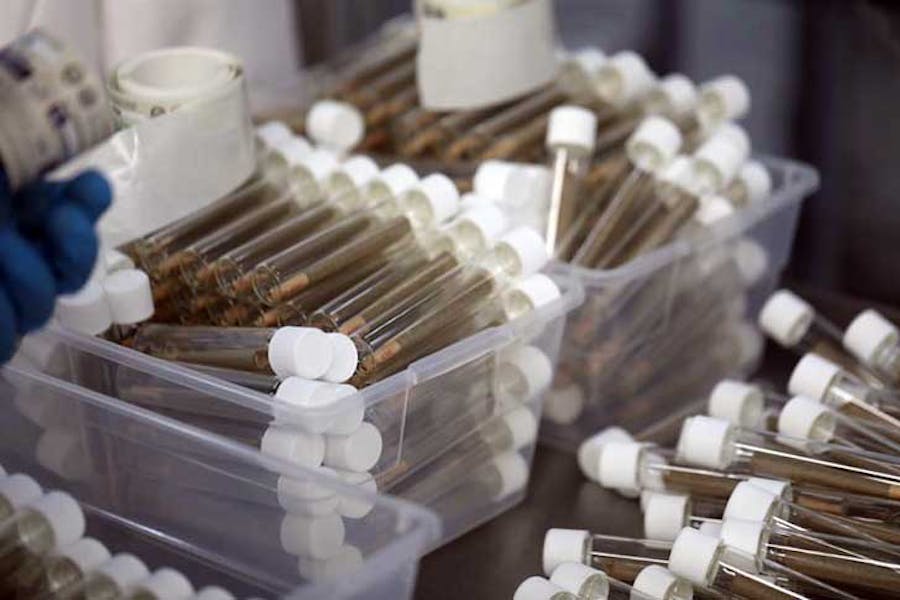 Individually packaged joints are prepared at a processing facility. (The Cannigma / Anthony Travagliante)

Could a standard dose of marijuana, or more likely, THC, benefit cannabis research and improve medical cannabis treatment? In theory, it sounds like a great idea: scientists could better compare effects, doctors could better recommend doses, and patients could better find the optimal amount to treat their conditions.

➤ Related: How to dose marijuana

The nature of the cannabis plant, however, makes standardized dosing a near impossible task.

The way one consumes THC — or cannabis — influences how it affects the body, how long it takes to feel the effects, and the duration of those effects. Importantly, tolerance to THC’s effects can mean that levels inside the body are not necessarily correlated with intensity of effects.

“When someone vaporizes or smokes cannabis, [it has] an almost immediate effect, a very sharp upswing in the amount in the serum and in the brain on a rapid down swing,” Dr. Ethan Russo explained on a recent episode of The Cannabis Enigma podcast.

“This is totally different than what happens when it’s taken orally, where the amount in the blood may stay very low over time but the person might be very high, so the serum levels don’t reflect what’s going on in the brain,” he added.

Despite those challenges, and for different reasons, the National Institute of Drug Abuse (NIDA) recently released a Request for Information (RIF) regarding a Standard Unit Dose of THC for cannabis research. According to NIDA this is important in order to “determine both the adverse health effects and therapeutic potential of cannabis and its constituents.”

What is standard unit dosing?

In its call for papers, the NIDA stated that it is interested in exploring “the possibility of constructing a standardized dose similar to that for alcohol (the standard drink), tobacco (a cigarette), or opioids (morphine milligram equivalents) for researchers to employ in analyzing use and for users to understand their consumption.”

Interestingly the NIDA ignored the concept of therapeutic index, a measurement of the safety and efficacy of a drug or medication. A therapeutic index is a tool for physicians that includes elements such as a lethal dose (LD) of a drug, toxic dose (TD), and effective dose (ED).

This is particularly important for physicians when looking for a therapeutic window — the optimal dose that lies between an effective and toxic dose. A physician will usually look for a dose high enough to be effective but not too high to cause undesirable effects. For instance, in paracetamol, the toxic dose is 10 grams while the effective dose is ~650mg. With cannabis, this is a bit more complicated, as information on the toxic and effective doses is lacking.

A standard unit dose is also helpful for physicians and their patients when trying to create a dosage regimen. Such regimens usually consist of the dosage form of the medication (tablets, syrup, inhalers, etc), the frequency of administrations daily, and the dose of the medication.

The case for a standard dose in cannabis research

According to NIDA’s director, Nora Volkow, establishing a standard THC unit is necessary for researchers exploring the medical use of cannabis. It would allow them to better compare the effects of different cannabis products and delivery methods. It would also help researchers understand some of the main concerns about cannabis use, including its influence on the immature brain and the risk of developing cannabis use disorders and psychosis. According to Volkow, cannabis research on brain development and cognition considers frequency of use, and does not address the THC content.

In a report published by the National Advisory Council on Drug Abuse in 2018, it was proposed that like with alcohol and other substances, having a standardized measure of cannabis could help consumers to think in terms of a standard drink when measuring their consumption. This would allow for much easier self monitoring.

Such a standardization could be beneficial for doctors and their patients when discussing potential misuse. It would also help define a standard measure for light, moderate, regular, heavy and chronic cannabis use, addressing not only frequency of use but also the amounts of THC consumed.

Another argument made by the council addressed the necessity of a standard unit dose for cannabis when measuring impairment. The effect of cannabis use on aspects of common life aspects such as driving and school or work performance is of public concern.

The NIDA’s proposal for a standard unit of 5mg THC is based on a 2019 study that presented previous proposals such as a standard joint or grams of cannabis, and suggested that like with alcohol, a standard unit “should be based on the quantity of active pharmacological constituents.”

The NIDA proposal, however, is rooted in the institute’s primary focus: abuse. The parameters for exploring standard dose units, therefore, is limited by that viewpoint.

That said, a standard dose could be also helpful for patients and their doctors. One reason physicians and patients often refrain from using medical marijuana is the difficulty in creating a practical dosage regimen. Traditionally, a dosage regimen consists of the amount of drug a patient should take at any given time and also the frequency of use (e.g. one capsule three times daily). With cannabis, the most common instruction physicians use is “start low and go slow,” but how low and at what pace?

With most pharmaceuticals, the amounts prescribed are usually based on high quality clinical research. One of the obstacles to having this kind of research is the lack of a standard dose. At the moment, researchers use different amounts of cannabis, and THC in particular, which causes mixed and inconsistent results. So for now, a cannabis dosage regimen based on research isn’t really possible because many researchers are studying the effects of different types of cannabis products.

THC is just one of the variables in the diversity of products being studied; other factors include delivery method, dosage form, and the presence of other cannabinoids and terpenes. Nevertheless, THC content is a main variable and standardizing it could be a first big step forward that might help physicians, patients, and recreational users alike.

The case against a standard dose for cannabis research

Though there are many potentially positive outcomes when it comes to a standard THC dose unit, the approach isn’t flawless. As mentioned, cannabis doesn’t equal THC; there are thousands of strains with different chemical profiles, and a growing body of evidence suggesting a potential chemical synergy in cannabis, known as the entourage effect. For instance, four cannabis varieties may contain the same THC content but have different effects because of other active cannabinoids, terpenes, and combinations thereof. So a standard dose of THC doesn’t entirely resolve the issue of inconsistent research results.

As mentioned, delivery methods can also have a significant impact on how THC and other chemicals in the cannabis plant are absorbed, metabolized, and their effects.

“There’s a difference between 10mg of THC that’s inhaled, which is actually a very big dose if someone is actually getting that much, and 10mg taken orally, which is going to affect some people who don’t have tolerance quite markedly, but the time contours are totally different,” Dr. Russo said.

“It also depends on endocannabinoid tone, a patient’s prior experience, do they have tolerance to the material or not?”

A person’s genetic variation is one factor that likely influences why people sometimes react differently to the same cannabis product. Another reason for this variability may be one’s unique endocannabinoid profile. It has been suggested that endocannabinoid deficiency might be the underlying cause of different health conditions. A standard dose, therefore, doesn’t necessarily mean that all — or even most — people would react to it in the same way.

There is also the problem of cannabis’s wide therapeutic index. Relative to many other drugs, THC has an exceptionally high lethal dose. It is so high that the World Health Organisation stated such a dose “could not be realistically achieved in a human following oral consumption, smoking or vaporizing the substance.”

The therapeutic index is usually calculated by dividing the toxic dose with the effective dose, but toxicological dose-response data for THC is lacking. The effective dose can vary among different consumers as a result of factors such as past experience, individual biological structure, and the other constituents in cannabis (mainly cannabinoids and terpenes). The therapeutic index of cannabis products is very difficult to determine, meaning that having a standard unit dose for THC won’t necessarily help in finding a therapeutic window and in defining a practical dosage regimen.

A standard unit dose of THC might also influence how the medical establishment treats CBD preparations and research into them. In one study for instance, participants were administered drops of cannabis oil with 12mg CBD and only 0.6mg THC, far below the proposed 5mg standard dose. Such oils are often used in therapy for certain types of epilepsy and also for autism. Limiting cannabis research and treatment to a standard dose of 5mg THC could be very problematic for these kinds of conditions, most common among pediatric patients.

A nice idea, but difficult to implement

Like a lot of things in life, the question of a standard unit dose for cannabis has two sides. From an institutional perspective, a standardized dose could be very beneficial, making medical marijuana more accessible for researchers, physicians, and patients. But from a naturopathic perspective, this could be perceived as interfering with the natural properties of cannabis therapeutics, and may limit the range of possibilities when looking for the optimal treatment for patients.

Or as Dr. Russo put it, “[it’s] a nice concept but very hard to put into practical effect. I’m not saying it shouldn’t be done, I’m just saying that it’s a real challenge to be able to come up with useful data.”

Regulation Is weed legal in Thailand?
Previous Article Meet ‘hashinene,’ the terpene that makes hash so unique Next Article What are cannabis suppositories?
The Cannigma uses cookies to improve your experience and to show you personalized adsACCEPTPrivacy Policy
Manage consent