‘Cannabis is letting me live longer’ 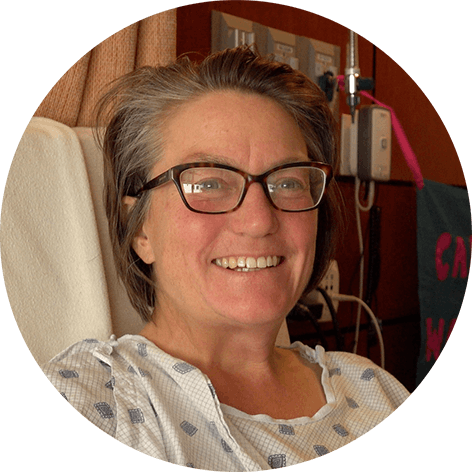 “I thought this was crazy but when you’re up against the wall you know you’ll try anything.” Michelle Kendall

Michelle Kendall’s journey as a medical marijuana patient was “an accident” as she puts it, and it came after she went all the way through high school and college without ever coming into contact with cannabis.

“I’m from the era of (former US First Lady and anti-drug advocate) Nancy Reagan and I was very scared of this stuff,” she told The Cannigma in a phone interview. “I thought this was crazy but when you’re up against the wall you know you’ll try anything.”

➤  Get your medical card now with The Cannigma Medical

Kendall, a 47-year-old former biologist, has terminal ovarian cancer, and her cell type is high-Grade Serous Carcinoma, with BRCA1/2-, and P53+. She was diagnosed four years ago and in the time since, has gone through eighteen rounds of chemotherapy and two major surgeries.

“I’m pretty much out of treatment options at this point,” she said.

A recent five-week round of physician-guided cannabis therapy, which saw her taking 80mg of THC per day, “worked as well as any round of chemo I’ve had,” she said.

Kendall says she won’t do any more rounds of chemotherapy. “I’m now just going with the cannabis because I know cannabis is a better option,” she said, adding that she believes it helped shrink her tumor.

According to the American Cancer Society, “there have been some early clinical trials of cannabinoids for cancer in humans and more studies are planned. While the studies so far have shown that cannabinoids can be safe in treating cancer, they do not show that they help cure the disease.”

Tests carried out on rodents and in labs have found that THC and other cannabinoids can potentially have a positive effect on tumor size. One study on rodents from 1996 found that THC could have a protective effect on tumor development, while a 2003 study on mice found that cannabinoid-treatment could induce “a considerable growth inhibition of malignant tumors” and increase cell death in tumors. More recently, a study published in 2014 found that direct targeting of cannabinoid receptors in cancer cells “via appropriate doses of THC may be an effective approach to reducing tumor growth.”

Also, researchers from the Israel Institute of Technology have said that they have found that “specific cannabis extracts impaired the survival and proliferation of cancer cell lines as well as induced apoptosis (cancer cell death).” The tests were not carried out on live animal or human models at the time of that study’s publication.

Kendall has tracked her treatment and tumor growth herself at her home in Santa Barbara over the past year using blood tests to track her CA-125 levels, which are sometimes used to indicate the progression of some ovarian cancers, and then seeing how those levels correspond to her THC regiment.

Her current regimen consists of a 5mg THC gummy in the morning, another one at 3pm, and then a 15-20 mg THC tincture dosage at bedtime.

She said that it does have some side effects, but describes THC as “incredibly forgiving.”

“I certainly have had short-term memory issues, and it’s been more difficult to focus. It’s easier to get lost in my head than it used to be,” she said. “Those are issues that are easy to deal with. I sleep great and I have some days where I feel high before I go to bed but it’s nothing worse than a big glass of wine.”

Kendall captured her experience with medical cannabis in the short documentary “Schedule 1,” which she released online this year on April 20 (“my new favorite holiday,” as she puts it).

The film opens with Kendall’s voice narrating “my name is Michelle and I have a crazy story to share. I have incurable cancer and I’m treating myself with a substance that’s been banned around the world for 80 years.”

In the movie, she interviews her neighbor, retired general practitioner and cannabinoid researcher William Black, who was the first to recommend to her cannabis as a way to help relieve her anxiety and help her sleep. He also gave her some of his homemade THC chocolates, which was her introduction to cannabis as medicine.

In the documentary, which was selected for the 2020 Los Angeles Shorts Film Festival, she describes her own tracking of her disease progression, saying “I’m just going to have to do my own science because I’m not going to have time to wait for real clinical trials.”

Kendall is careful to note that cannabis “is not a magic bullet,” and when asked if she would recommend other cancer patients try cannabis as a treatment, she replied “it’s not a magic cure all.”

“There’s very complex biochemistry going on and if you have the type of cancer that is very easily treated on a regimen that’s already been documented I would say please don’t abandon the traditional treatment,” Kendall said.

She also said that cannabis treatment should be done with the guidance of a trained physician.

“There is nothing in the pharmacopoeia that is going to save me,” Kendall said, adding that cannabis “may not be curative but I know that’s allowed me to live longer.”