Treating kids for pain with cannabis is too risky, study says 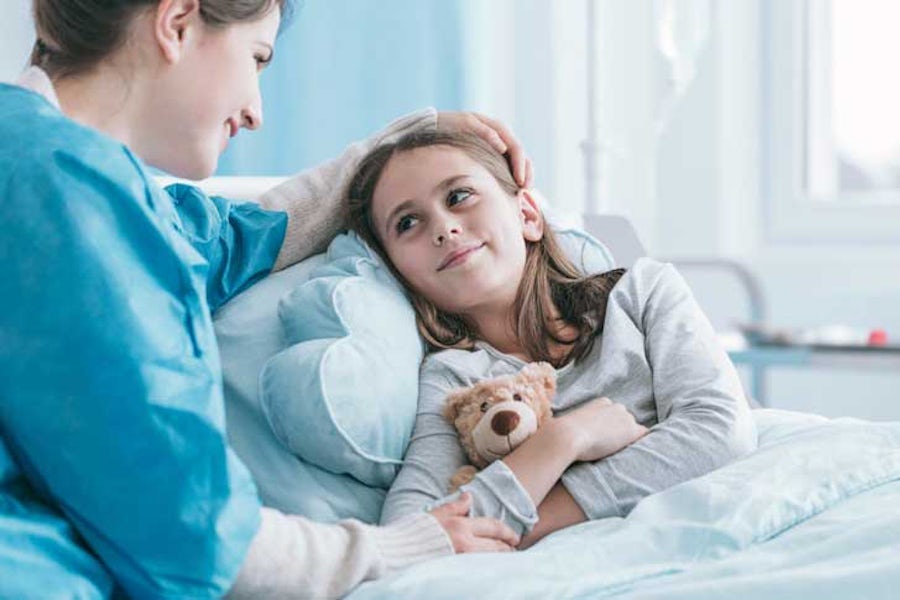 A child and caretaker in a hospital bed. (Katarzyna Białasiewicz/123rf)

Chronic pain is the number one reason people are prescribed medical marijuana. Countless patients have praised its ability to relieve pain, and help them reduce their intake of dangerous painkillers. But what about pediatric patients? According to the authors of a new systematic review of existing research, there is not enough evidence that the benefits of cannabis use outweigh the potential side effects.

The review, published in Adolescent Health Medical Theory, reached the conclusion that “based on the current literature, there is insufficient evidence to support routine use of medical cannabis for pain in children and youth.”

The researchers state that their concerns are partly because “the endocannabinoid system is under active development during childhood and adolescence and little is known about the long-term effects of cannabis exposure on the developing brain.”

That said, the researchers note that as of now there have been no randomized-controlled trials on pediatric or adult patients that show the long-term risks of medical cannabis.

The researchers assert that because adolescents perceive that “cannabis is ‘natural’ and thus safer than other forms of pharmacotherapy,” there is a need for “better evidenced-based education about cannabis for children and youth.”

Regardless of the apprehension about childhood cannabis use, the review does cite reports that show potential benefits of cannabis use. For instance, it states that “medical users accounted for 3% of all youth who used cannabis in the past year,” and cite a 2003 report that found that children and youth who use medical cannabis and who took part in the study “perceived improvements in mood, sleep, activities of daily life, academic performance, and relationships.”

They also cited a 2018 report that found “similar, modest improvements in pain” in 25 patients aged 1-17 who were using high CBD oil to treat pain.

When it comes to adverse effects, does reducing the dose make a difference? “The most common adverse effects of THC and CBD are drowsiness, dizziness, diarrhea, and increased appetite; all of which seem to improve with dose reduction,” the researchers wrote. They also cite a small study carried out on patients aged 1-17 with complex motor disorders, which found that “CBD and THC were associated with serious adverse events in five out of 25 participants,” but that these were all reversible through dose reduction.

The review does not address whether using cannabis for pain relief is safer than alternatives such as opioids. Instead, it mentions a study that found that 59% of patients ceased using opioids after they started using medical cannabis to treat pain, though they also mention a study carried out over a longer period of time that found “no effect of cannabis use in opioid use.” The review also doesn’t state if any of these findings regarding opioid use and cannabis involve adolescent patients.

Another issue is when children who are on other medications are also “self-medicating with cannabis without consulting a physician, thus increasing the risk of potential drug-drug interactions,” the researchers state. “Co-administration with THC results in increased bioavailability and adverse effects of these medications.”

One major shortcoming of the review is that it only relates to pain, and does not mention any other conditions which adolescent patients can use medical marijuana to treat. Most notably, it makes no mention of epilepsy.

For decades, trials have been conducted on the use of medical cannabis for epilepsy, mainly through the use of cannabidiol (CBD), which lacks the psychotropic effects of THC. Studies have found that the use of CBD can reduce seizures by up to 50%, though others have reported no effects positive or negative. One open label trial found that children with Dravet syndrome — a particularly difficult form of epilepsy — had a reduction in seizures when given medication that combines THC and CBD.

In addition, in early June, a trial began in the UK that will test the use of CBD in treating infants suffering from HIE (Neonatal Hypoxic Ischemic Encephalopathy).

Regardless of the shortcomings of the study, it is not the first to sound the alarm about the potential dangers of adolescent and childhood cannabis use. A previous study carried out in 2014 found that adolescent marijuana users between the ages 13-18 “performed worse on tests of attention, learning, and memory.”

Whether these potential side effects outweigh the potential benefits in pain relief is a decision to be made by a consulting physician and their parent or guardian.