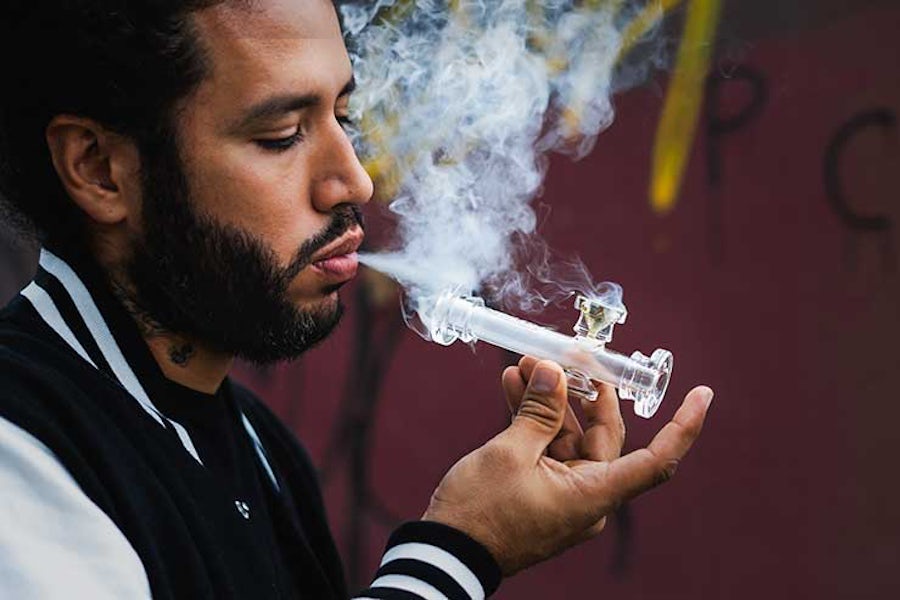 A man smokes marijuana from a glass pipe. (Grav/Unsplash)

Individuals with depression are more likely to consume cannabis than their peers without depression, according to a new study published in JAMA Network Open.

Researchers from Columbia University and the New York State Psychiatric Institute reviewed data taken from the National Health and Nutrition Examination Survey between 2005 and 2016 and found that while overall cannabis use in the US population grew steadily in this period, people with depression were at significantly higher odds of using cannabis.

The researchers theorize that this strengthening association between depression and cannabis use may be down to attempts to self-medicate using cannabis, given that nearly 50 percent of the general public believe cannabis to be beneficial for anxiety or depression.

People with depression particularly likely to use cannabis daily

The National Health and Nutrition Examination Survey (NHANES) data used in the study allowed the researchers to examine information gathered from over 16,000 US adults aged between 20 and 59 years at the time of the survey. This NHANES data is nationally representative and uses clustered, stratified sampling to ensure representativeness, which helps make it a strong source for further scientific analysis.

From studying these data, the researchers came to three central conclusions. Firstly, as corroborated by other recent epidemiologic studies, the overall prevalence of cannabis consumption in the general population has increased. In the 2005-06 survey, 12.2 percent of respondents reported using cannabis within the past month, with 3.8 percent also reporting using cannabis daily or almost daily. By the 2015-16 survey, these figures had grown significantly to 17.3 percent and 6.1 percent respectively. Notably, as determined by a validated health questionnaire in the NHANES, there was no accompanying significant change in the prevalence of depression.

In contrast to those overall prevalence figures, further examination of the 2015-16 survey data revealed that more than 30 percent of individuals identified as having depression reported using cannabis within the last 30 days, with more than 15 percent using cannabis daily. This is significantly higher than the general population.

“These results suggest that over time, a higher proportion of individuals with depression are using cannabis,” the study authors wrote.

“This could be the case if an increasing number of individuals with depression are using cannabis to self-medicate, potentially influences by media and advertising presenting cannabis as beneficial to health.”

Anxiety and depression are commonly included as conditions of interest in medical cannabis trials. But why is cannabis thought to be helpful for these mental health conditions?

CBD, a major non-intoxicating component of cannabis, has been shown to hold promise in attenuating feelings of anxiety in controlled trials. Animal studies have also suggested that CBD may elicit a sustained anti-depressant effect.

But while CBD may show promise in clinical settings, cannabis itself is more complex. A recent review published in Lancet Psychiatry, which described itself as the “most comprehensive review of the evidence to date,” found little evidence to support the use of medical cannabis or pharmaceutical CBD in treating symptoms of depression, anxiety, attention-deficit hyperactivity disorder (ADHD), Tourette’s syndrome, post-traumatic stress disorder (PTSD), or psychosis.

“So, things like experiencing memory problems as a result of cannabis use,” Dr Lindsey Hines, a researcher at the University of Bristol and senior author of that study, clarified to Analytical Cannabis in May.

The researchers saw that generalized anxiety disorder was most closely associated with using high-potency cannabis. However, there was no clear correlation with depression.

“When we do research into cannabis and mental health, people suggest that what we’re seeing is a kind of artifact of self-medication — that people use the drug to attenuate their own mental health symptoms,” Hines added.

“And I think the fact that we see an association with anxiety but not depression is kind of an argument against that in this case. Because, anecdotally, people use cannabis to help deal with their anxiety and depression[…] So the fact that we’re only seeing this for anxiety supports the case that this is less likely to be self-medication.”

Speaking to Analytical Cannabis last November, Ian Hamilton, a senior lecturer in addiction at the University of York, expanded on the societal problems that can come with an increase in cannabis use.

“Even a small percentage increase in regular cannabis users can increase the risk of developing problems like cannabis dependence, which services would be unlikely to have the capacity to support,” said Hamilton.

“For the small proportion of users who develop problems, support services need to be adequately funded and available – something [US] states and countries should factor in when thinking of changing their cannabis policies.”

Previous Article Poll: People think legal marijuana is safer — but too pricy Next Article Can you get high from eating hemp-fed cows? The FDA wants to know
The Cannigma uses cookies to improve your experience and to show you personalized adsACCEPTPrivacy Policy
Manage consent